“Railroad Train to Heaven”, Part Fifteen: an appearance by an old acquaintance 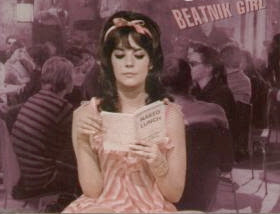 Previously in our serialization of Railroad Train to Heaven, Arnold Schnabel, the famed “Rhyming Brakeman of Nedro Avenue” (also known as “The Walt Whitman of Olney”), still recovering from a complete mental collapse the previous winter, finds himself in a compromised position on a second-floor rear porch with the dark-haired bohemian girl Elektra.


“I think we should go inside now,” she said, still touching that organ which never seemed to give Jesus or any of the saints any trouble.

Again she pressed herself hard against me; but a curious thing, when a girl presses hard she feels soft.

But unfortunately I was not.

“She spells it as one word. Her real name’s Mary Margaret.”

“Arnold, we’ll just go right past them and straight into my bedroom.”

Those universe-sized dark eyes stared up at me again. Who was I to disappoint her?

“Um, is Elektra your real name?” I asked.

"But I changed it to Elektra.”

It was a man’s voice. Behind me. I turned and saw Jesus, just sort of hovering there, right beyond the railing.

I hadn’t seen him since him since that one night in Byberry.

“What is it, Arnold?” said Elektra. She brought her body around so that she was between me, and the railing, and Jesus, who was now drawing a pack of Pall Malls (my brand!) from within his robes.

I couldn’t bring myself to tell her what I was actually seeing, so instead I kissed her again.

She tasted of wine and cigarettes and spaghetti (as no doubt did I) but this was not a bad taste.

“She’s just saying that, old boy,” said Jesus, smiling, exhaling a cloud of smoke that swirled and danced and flew up to the sky to lose itself in the Milky Way. “It’s an exclamation,” he continued, “and it requires no verbal response. Go ahead, put your hand under her dress.”
This took me aback I have to say, and I stared at him. Wait a minute, I thought. What if he were not Jesus, but the Devil, or at any rate a devil. (I doubted that the Devil himself would deign to appear to the likes of me; more likely he would send one of his lesser minions).

“No, Arnold,” he said, reading my thoughts. “It’s really me. Jesus. Now stop staring off into space and kiss that girl again.”

I obeyed his injunction.

After a minute or two, or maybe three, Elektra drew her face away from mine.

I went to kiss her again but she stopped me with a hand on my chest.

“I just realized,” she said. “You are incredibly stoned on that grass, man, and that’s why you’re acting so weird.”

And suddenly I realized that this could be the explanation for Jesus standing there in mid-air, smoking a Pall Mall: I was, as Elektra said, stoned.

I closed my eyes. If he is a figment of the marijuana, I said to myself, he will be gone when I open my eyes.

I opened my eyes.


(Click here for our next thrilling installment. For links to other episodes of Railroad Train to Heaven -- soon to be a major television event brought to you by PBS and a generous endowment from the Arnold Schnabel Society -- and to many fine poems from the pen of Arnold Schnabel, check the right hand column of this page.)
Posted by Dan Leo at 2:28:00 AM

Jesus! So much more than even I would dream of asking for. I know people say He's divine, but to me? Well, you know...
Or, maybe you don't: to me, He's Sublime.

Kathleen dear, not only does Arnold thank you for your kind appreciation, but Jesus thanks you too.

And all you Arnold fans, get on over to Kathleen's fabulous site and dig some real literature. Again, it's called "Diary of a Heretic", but actually she's a true believer: