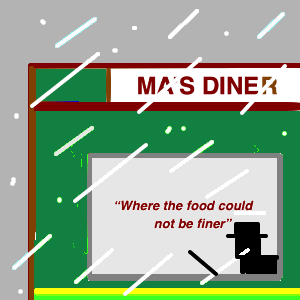 The snow came down in icy droplets. Addison stood in the entranceway of his building, looking across Bleecker at Ma’s Diner, and through the steam-clouded window he could see Tommy McCarthy in his usual booth, facing away, towards the Bowery. Tommy was a creature of habit, and every Sunday after the noon mass at the Church of the Nativity he walked over to Ma’s for a leisurely breakfast and the Sunday paper. Addison had waited until two before coming down. Tommy should be finished eating now.

Addison left the shelter of the entranceway, and started across the street. A car horn bleated, and he broke into a run as a cab drove past, just barely missing him. How ironic if the cab should have had hit him! That would have solved all his problems. Unless he were merely crippled, and then he would have had a whole new set of problems.

Breathing heavily he made it without further incident to Ma’s door, opened it and went inside. The place was full, as it usually was on a Sunday afternoon. Feeling as if he might pitch forward in a faint he walked over to the booth where Tommy sat.

Tommy looked up from his paper. He was smoking one of those big cigars of his.

“Look who the cat dragged in.”

Addison sat, and put his hands on the table.

“You want somethin’ to eat?”

“Tommy, it’s about this job you’ve offered me.”

“I’m glad you asked, Anderson, on account I’m gonna need you this week.”

“Yeah. About time you started earning your pay, right?”

“The thing is, I don’t think I can accept the job after all.”

“You see, with this book I’m working on, I really need to concentrate.”

“It ain’t like I got you working nine-to-five, forty hours a week.”

“You been on the payroll a week, I ain’t asked you to do nothing yet.”

“A C-note I give you. That was last Monday, right? You got another C-note coming tomorrow, less you want to make your payday another day of the week. It don’t matter to me.”

Addison had the money all ready in his coat pocket, and he drew it out and put it on the table.

“It’s the hundred dollars you gave me, Tommy.”

“Well, it’s not that I don’t want it, it’s just that I’ve decided that I really can’t accept a position at this time.”

“Why you insulting me?”

“You think I’m some kind of Indian giver, Anderson?”

Tommy looked at Addison with those steely blue eyes. Addison was sweating.

“I don’t know what you’re talking about.”

“I feel very uncomfortable carrying it.”

“It ain’t supposed to be comfortable.”

Addison put his hand into his coat pocket.

“You tryin’ to get us both pinched.”

“You gonna drag that thing out in here.”

“What if there’s a plainclothes dick in here. Or a professional stool pigeon. What the fuck’s the matter with you, Anderson.”

“I don’t know, Tommy. I’ve been asking myself that question since I was seven years old.”

Tommy took a drag on his cigar, gazing out the wet window at the falling snow. He tapped his ash into the ashtray in front of him, and without looking at Addison he said:

“Pick up that funny section of the Federal-Democrat there. Put it on your lap. Then, holding the paper over your pocket, take out the thing and put it inside the paper. Then put the funny pages with the thing in it on the table.”

Addison managed to carry out these instructions.

Tommy turned, looked at the comics section with the lump in it, looked at Addison.

“All right. You can go now, Anderson.”

“Thank you, Tommy. Thank you so much. I really appreciate it.”

Addison started to get up.

Tommy gestured to the five folded-over twenty-dollar bills on the table.

“It’s the hundred dollars you gave me, Tommy, for my first week’s, uh, employment.”

Addison picked up the five twenties.

“Stick it in your pocket.”

Addison put the money in his pocket.

“Good luck with your book.”

“What’s it about again?”

“Well, it’s a comparative study of critical thinking on the modern novel –”

“You know what you ought to write?”

“You oughta write a western.”

“Yeah. Like Zane Grey. Or that Horace P. Sternwall. You ever read any of that guy’s books?”

“Hard Ride to Laredo. You read that one?”

“Sally Six-Guns? That one was good.”

“See ya around, Anderson.”

“Unless you’re gonna get something to eat. A cup of joe. A doughnut.”

Tommy picked up the sheaf of funny pages with the pistol inside it, brought it down to his side.

“Stand there next to me a second.”

Addison stood next to Tommy while Tommy took the gun out of the paper and put the gun into his suit jacket pocket.

Addison reeled away, and out the door. It was still spitting snow. He went out into the street and just avoided being hit by another taxi cab.

{Please go here to read the “adult comix” version in A Flophouse Is Not a Home, illustrated by the incomparable rhoda penmarq…}
Posted by Dan Leo at 5:28:00 PM