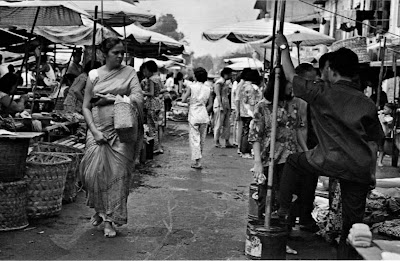 It is only the third day of Larry Winchester’s sprawling epic, (click here for our previous episode) now presented uncut for the first time.

A young soldier named Harvey has returned from Vietnam to his depressed and depressing New Mexico hometown. He is barely home an hour when he is forced to kill a nasty bully named Bull Thorndyke in self-defense. The local big rancher Big Jake Thorndyke promptly hires Harvey to act as guide to the mysterious strangers Dick and Daphne Smith (real surname: Ridpath). Later that night Dick is forced to kill a nasty motorcycle gang member in self-defense.

It was a grey afternoon, a little cool for September, the sky the color of the inner shell of a freshly opened clam, and Harvey sat smoking on the porch rail and chatting with Mrs. Smith. The three horses stood there saddled and waiting, hitched to the post, and Mrs. Smith was running her fingers through the mane of the chestnut mare she’d chosen for her own self. Tip and Ed Harris the foreman and Pedro the stable man stood over there by the corral looking at Mrs. Smith. She wore that Jungle Jim helmet and black boots and these tight tan riding pants and an embroidered paisley vest with a pink shirt under it and a red silk scarf around her neck.

Mr. Smith came out with Mr. Johnstone, and Harvey got off the railing. Mr. Johnstone yelled across to Tip and Ed and Pedro:

“You boys lookin’ for some work to do I’ll find ya some.”

Tip and Ed and Pedro took one more good look at Mrs. Smith and then tossed down their cigarettes and walked off back toward the stables.

Mr. Johnstone had a leather belt with a covered holster with a gun in it hanging over his shoulder.

He handed Harvey the gun belt.

“Now I know you ain’t no pistolero,” said Big Jake, “but after what happened the other night with them bikers I figger it don’t hurt to be careful. You got six in the cylinder and a couple loaded speedloaders in the ammo pouches there. Ya know how to work ‘em?”

Harvey unclipped one of the pouches and looked in.

“Yeah, ya just plug it up against the cylinder and turn the gizmo, right?”

Harvey buckled on the belt, then took the pistol out. He popped out the cylinder, emptied all the cartridges into one hand, put them into his shirt pocket, and then checked the pistol out, popping the cylinder back in and spinning it, cocking and uncocking the hammer, squeezing the trigger hard and then soft a few times, with the hammer cocked and with it uncocked.

“Good. Now I had Esmeralda pack your sandwich cases with some nice sandwiches, plus you’ll find a flask o’ fine old fino sherry in each one, but I want you folks to be sure and get back in time for dinner. We got a side o’ beef all set for roastin’ in the mesquite pit and we gonna have us a old style New Mexican barbecue.”

“Well, we won’t be late then,” she said, and she swung herself up onto the mare in a motion so smooth that the animal didn’t even budge.

Mr. Smith and Harvey mounted up also, but with considerably less grace, and they all headed out toward the gate.

Before they reached the gate with the neon Johnstone Ranch sign hanging from a metal cross-pole over it a car came up fast behind them, spooking the horses, and it was that German couple, in an open Range Rover.

They all leaped about a bit on their horses in the dust, trying to hold on and to settle them down, and Harvey damn near got thrown.

The Range Rover turned horizontal to the entrance and stopped, and the two Krauts were smiling or grimacing ear to ear.

“I am sorry,” called the man. “We should have been more careful.”

Harvey felt an intense hostility as he patted the horse, which was still neighing and whinnying, pulsing under his legs and stamping at the dirt.

The Kraut waved, and then rammed the car around and out the gate, leaving a cloud of exhaust and dust behind it.

After the Brian Jones affair Grupler had deemed it best not to linger in Great Britain. Marlene was afraid she had left fingerprints on a whisky tumbler, the Krays still had an open contract out on them, and far too many people had seen them in London already. Marlene met the bag man outside the shop on Jermyn Street as planned, and as soon as she gave Grupler the signal that the money was correct Grupler followed the man, put an ice pick into his throat and up into his brain and then walked quietly on.

A week on the beach in Ibiza and they were both bored.

Marlene met a rich Dutch youth who was interested in entering the Vietnamese heroin trade.

A week later Grupler and Marlene arrived in Saigon via Bangkok disguised as West German missionaries. They proceeded to cheat their Dutch employer out of a hundred thousand dollars and fifty-nine kilos of raw heroin.

One day, as Grupler was waiting for the culmination of the deal he had set up to unload the heroin, he saw Dick Ridpath sitting in a café with a beautiful young woman whom he later found out was Ridpath’s wife. Grupler was intrigued. If Ridpath was really retired what was he doing here in Saigon, in this city reeking so bracingly of venality and murder? Grupler decided to keep an eye on him, and the next day he read that a hat shop owned by Ridpath’s wife had been bombed. As it happened that same day Grupler’s heroin was stolen from the military warehouse he had stored it in by a couple of former members of Philadelphia’s notorious East Oak Lane Boys, now serving in the US Army. And to make matters worse that very night Grupler got drunk and lost $42,000 playing poker with some American and Australian businessmen.

But Grupler made inquiries, blood was shed, and he found out that the bulk of his (he thought of it as his) shipment of Burmese heroin had been flown down to Singapore, there to be transported to the States in a private yacht. He also found out that the man hired to captain the yacht was none other than Dick Ridpath.

Grupler bribed passage aboard a C-47 Air America flight, and he and Marlene were in Singapore two hours before the Ridpaths.

Grupler, wearing an uncomfortable false beard, and Marlene, in a blond wig, trailed Dick and Daphne to the Palm Grove. They engaged the suite adjacent to the Ridpaths. They followed the Ridpaths down to the docks, and saw the policemen swarming over the yacht like bugs.

For two weeks Grupler and Marlene shadowed the Ridpaths. Grupler even set up listening equipment on the wall between their suites. Despite the grueling insipidity and even inanity of every conversation he overheard Grupler still refused to believe that Ridpath had nothing at all up his sleeve, let alone that Dick had been unaware that he had been hired to transport heroin and had no money and no prospects.

And Grupler was listening with his headphones that 4 AM when Ridpath received that strange message on his wireless.

So, to San Francisco.

(Go here to see what happens next. And check the right hand column of this page for links to other chapters of Larry Winchester’s A Town Called Disdain, and to appreciations of many of Larry’s fine films. Coming soon to a selected art theatres and campuses: the restored 35mm black-and-white mono version of Larry’s long-lost 1964 classic, In the Graveyard of My Youth, starring Michael Parks and Tuesday Weld.)

It's all coming together now.