"We must move swiftly, Leonidas! Swiftly, yea, verily, e'en like unto the wind, my good liege!" 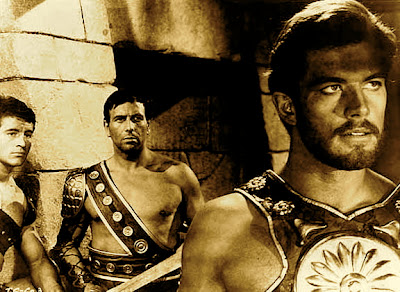 Following the world-wide success of the Richard Egan vehicle The 300 Spartans, Italian producer Dino DiLaurentiis commissioned Larry Winchester to come up fast with an unofficial sequel. “Problem being,” wrote Larry in his memoirs, “the 300 Spartans all got croaked at the end of the first movie.” With one week to deliver a script Larry called in his old pal “Rags” Larkin, who quickly came up with the twist that the 300 Spartans are raised from the dead by a sorceress (ravishingly realized by the never-lovelier Eydie Gormé), complete with buff new bodies and raring to kick some effete Persian butt. A lifelong believer in the musical interlude, Larry staged several wild song and dance numbers featuring the stylings of Miss Gormé and her husband Steve Lawrence as well as British teen idol Cliff Richard.

Shot in two weeks at the Cinecittà studios in Rome, this was Larry’s sole but brilliant foray into the noble sword-and-sandal genre. Some scholars deem this Larry's weakest film, but that still makes it better than 99% of the other crap out there!

(Check the right hand side of this page for a listing of links to "The Films of Larry Winchester" as well as to our serialization of the "Director's Cut" of his long-out-of-print Schaefer Award-winning novel A Town Called Disdain.)
Posted by Dan Leo at 2:28:00 AM