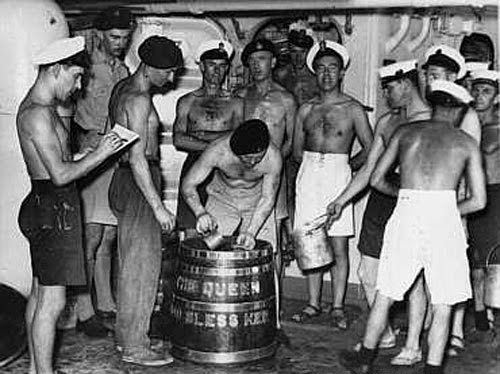 Let us return to a rainy night in old Greenwich Village in August of 1957, and to a certain shop which specializes in the rarest of rare books, where we rejoin our hero Arnold Schnabel, his companions Big Ben Blagwell and Ferdinand the talking fly, and the proprietor of this unusual establishment, one Mr. Augustus Philpot...

(Kindly click here to read our previous chapter; go here if in your madness you would like to start at the beginning of this 79-volume Gold View Award™-winning autobiography.)

“What better way to spend a dreary cold and rainy April day than sitting in a comfortable chair with one’s Kindle™ by a roaring fire, drinking hot cocoa prepared with Fox’s U-bet© chocolate syrup, lost in the adventures of Arnold Schnabel?”  – Harold Bloom, in The Ladies’ Home Journal Literary Supplement.


Or perhaps a drink of rum would be a very bad idea.

Let’s face it, I’ve never had very much self-control with alcoholic beverages, especially when I’m in a psychologically distressed state, which state has accounted for approximately 95% of my life, including those portions of it spent sleeping or passed out.

I stood up, almost knocking my chair over.

“Easy there, fella,” said Ben. “We’ll get you a nice tot of rum in just a minute.” He took his switchblade out of his pocket and flicked it open. “Whaddaya think, Mr. Philpot, just pry open the barrel head?”

“Blagwell,” said Ben. “Ben Blagwell. Why is that name so hard to remember?”

“Fair enough,” said Ben, and he set to work prying open the top of the keg, which was nailed to the staves and sealed with what looked like tar.

“Get to it, big guy,” said Ferdinand, still merrily buzzing around the keg, on which were painted the words, in faded and yellowed white letters: THE QUEEN GOD BLESS HER. “I got me a powerful thirst all of a sudden.”

“Hold your horses, there, little guy,” said Ben. “Mr. Philpot, you got a couple more glasses around here? You only got two on your desk there.”

“I don’t need no glass,” said Ferdinand. “Just spill some drops on the desk there and I’m good.”

“Well, that wouldn’t be very tidy,” said Mr. Philpot. He was crouching next to Ben now, rummaging in a drawer under his desk. “Here we go.” He brought out another jelly glass. “And, for our friend the loquacious fly –” He held up a thimble.

“Aw,” said Ferdinand. “For me? That’s very thoughtful of you, Mr. Philpot.”

“Think nothing of it, my tiny friend,” said Mr. Philpot.

He blew into the glass, then held it up to the light again. It looked dirtier now than before he had started wiping it. He gave it another perfunctory wipe, put it down on the desk, and then picked up the thimble.

“Uh, look, you don’t have to wipe the thimble,” said Ferdinand.

He looked at Ferdinand over the top of his pince-nez glasses. (I hope I mentioned before that he wore pince-nez glasses. I’m certainly not going to rummage through all my marble copybooks trying to find the one in which I first described him. If I didn’t mention the glasses before, I apologize to the reader, if I ever have one. As I have mentioned, and as if it weren’t plainly obvious, I am not a very good writer, and this sort of oversight is bound to happen now and then. Anyway, he wore pince-nez glasses, with a black ribbon knotted to the wire frames, dangling down and fixed to one of the buttons of his wing shirt-collar.)

“It’s dusty,” said Mr. Philpot, “been sitting in this drawer for who knows how long.”

“That’s cool, Mr. Philpot,” said Ferdinand. “I’m a fly after all. We are not known for our punctilious hygiene.”

“Yes, I suppose you’re right,” said Mr. Philpot. He laid the thimble down and then stuffed the dirty handkerchief back up his sleeve. “In fact, would I be wrong in presuming that you in point of fact prefer things to be shall we say, somewhat –”

“Quite all right, Mr. Philpot. Don’t give it another thought.”

“Very well. How are we doing there, Mr. Bogstall?”

“Blagwell,” said Ben. True to his word, Ben had almost pried up all of the barrelhead, the ancient nails sticking out from its rim. The smell of rum coming from the keg was thick and rich, and beckoning. “Almost got it, Mr. Poopot.”

“My name is Philpot by the way,” said Mr. Philpot. “Augustus Philpot.”

“Just fucking with you, old timer,” said Ben. “So what do your friends call you? Gus?”

“They call me Philpot.”

“Fabulous,” said Ben. He closed his switchblade and put the knife back in his dungarees. “Okay, here we go.”

The barrelhead was now only attached by the ends of a few nails. Ben took it in both of his mighty hands, pulled it up and off.

“Where you want me to put this, pops?”

“Against this wall okay?” said Ben.

“Sure, fine,” said Mr. Philpot, and Ben stood the round piece of wood with the nails sticking out of it against the wall behind the desk.

“I’m afraid I don’t have a ladle,” said Mr. Philpot. “Oh, wait.” He opened another drawer under the desk and brought out a thick cracked coffee cup.

“Sure,” said Ben. “Hand me that cup you borrowed from the automat, Gus.”

The attentive reader will have noticed that I said nothing through all of the above. I had nothing to say, not that this state of being always keeps me from saying something anyway, but in this case my mind was preoccupied.

I was thinking that once again I was on the verge of letting myself be swept along by events instead of taking positive measures to determine my own destiny, once again I was taking the easiest course, the course of passivity and inaction. Once again when confronted with a difficult problem I was about to ignore the problem and have a drink instead. I wondered why the son of God had even bothered to become my friend. Was it because I was such a hopeless case and he took pity on me, or was it because he looked on me as a challenge worthy of his divine powers?

Ben was thrusting a jelly glass half full of a murky liquid at me.

Ben also held a glass of the stuff, as did Mr. Philpot, standing to his left.

As for Ferdinand, his thimbleful of rum had been placed on the desk top near its center, and he sat on its edge gazing fondly down at the rum and rubbing his little forelegs together in anticipation.

“What shall we drink to, gentlemen?” said Mr. Philpot.

“I say we drink to good pals,” said Ben. “The kind of pals that go through the tortures of the Gestapo’s Black Leather Sadist Harlots for ya.”

“Yeah,” said Mr. Philpot. “What are you talking about?”

“That’s what I was afraid you said,” said Mr. Philpot.

Suddenly a doorbell rang. If I haven’t mentioned it before, it was one of those old-fashioned doorbells which actually was a bell.

“What the fuck,” said Ferdinand.

It was very loud.

“Maybe you better get it, Gus,” said Ferdinand.

“I don’t know who it could be at this time of night,” said Mr. Philpot.

He put his glass down on the desk and headed around Ben toward the door.

“I can handle myself,” said Mr. Philpot.

“What if it’s one of them juvenile delinquent thrill-kill gangs?” said Ben.

He was at the door. He turned the bolt and opened it.

Standing outside, under the awning, folding up an umbrella, was my friend Josh.

The son of God.

(Continued here, and on and on, come hell or high water and everything between the two.)

(Please turn to the right hand column of this page to find a usually reasonably-current listing of links to all other published chapters of Arnold Schnabel’s Railroad Train to Heaven©; this week’s chapter brought to you by Fox’s U-bet™: “Made with sugar not corn syrup during Passover, so stock up now for year-round enjoyment!” – Horace P. Sternwall, author and motivational speaker.)

Like Ferdinand, I've had doubts about the Nazi leather torture babes. But never about Josh!