“A Town Called Disdain”, Episode Forty-One: Dick shares a private moment with Hope in her boudoir 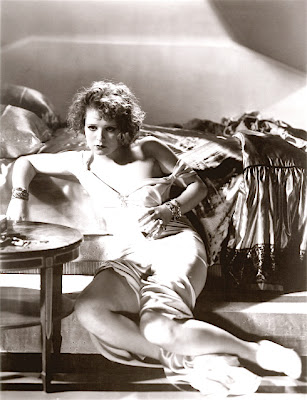 Larry Winchester -- long renowned as a master film maker, and only now receiving his due as perhaps the greatest American novelist since the days when Harold Robbins, Jacqueline Susann and Ayn Rand rode roughshod over the literary landscape -- now shifts his point-of-view to that of Dick Ridpath (AKA “Dick Smith”), former naval officer and man of mystery, a guest with his lovely wife Daphne at the ranch of Big Jake Johnstone, father of Hope, the enigmatic child-woman who earlier that day had suffered a disturbing attack of hysterics on Dick and Daphne’s bed.

Dick came out of the bathroom in his kimono, walked down the dusky hall, and then saw the somehow familiar dark eye peering through the slightly opened door.

The door opened a bit more and it was Hope, in her nightdress.

Dick found himself glancing furtively up and down the hall.

He came in. She closed the door behind him and stood there with her back to it, her small fingers splayed against the wood.

“You smell nice,” she said.

“Thank you. It’s these bath salts that Daphne got in Singapore. At the -- hotel. The hotel, there.”

Dick looked around, nervously. Candles of various colors and scents burned on the dresser and on the bedside tables. The room was dark and soft-looking, with Mexican and vaguely oriental draperies and hangings; deep red velvet curtains covered the windows and barred all but a faint leakage from the failing twilight outside. A black-and-white photograph of Clara Bow brooded over the bed.

Dick turned back to look at Hope again, still standing there with her back against the door. She looked at him steadily. He glanced away again and wished he had a cigarette.

He thought of six or seven ice-breakers in succession but somehow couldn’t bring himself to say any of them. Instead he looked around the room again and occasionally glanced back at her seemingly impassive or perhaps simply insane gaze.

I can take this. I’ve stood far worse than this. Eventually she’ll say something.

And finally she did.

“Well, to be honest,” said Dick, “that’s something I’ve always liked to do myself. You know, um, go through other people’s things --”

“Just for a minute,” she said.

She glided over to the bed and sat in it, seeming barely to disturb the disordered nest of blankets and sheets and clothing that lay upon it. She looked at him and patted the bed with her left hand.

Dick hesitated for a fraction of a moment and then went over and sat on the place indicated.

Drawing her legs up under her nightdress she turned to face him.

It was a very comfortable bed, a feminine bed of the sort Dick had always loved, one of those beds you wanted just to lie down in and never get out of.

He liked this room and he liked the books he saw on the night table. Jane Eyre. Wide Sargasso Sea by Jean Rhys. Labyrinths by Jorge Luis Borges. Thérese Desqueyroux, in French. A collection of the poems of Lorca, in Spanish.

“One of those men tried to get into your room. That Mr. Adams.”

“He picked the lock.”

“No. But only because I was already in there.”

“I see. Well, thanks for telling me.”

She said nothing, and once again she kept that seemingly implacable gaze upon him. And once again he couldn’t take it, and again he began to look around the room.

“Why are they after you?” she said.

“I’m not sure what they are but I suspect they work for the government. FBI maybe.”

“Maybe that’s why they’re after you. Some top secret thing you did or knew.”

Dick looked away for a moment, abashed.

“Well,” he said, “it’s all because of your father. See, he thinks we’re criminals, so we’re just playing along.”

“Well, basically because we’re broke, and as long as he thinks we’re hot-shot criminals he seems to be willing to give us free room and board here.”

For the first time she smiled, and Dick felt a warmth in his heart.

“Oh, I hate him,” she said cheerily. “How could anyone possibly like such a pig?”

Dick shrugged, but slightly. He felt awkward looking into her eyes, and he lowered his, but then he saw the gentle protuberance of her small round breasts and the suggestion of her nipples beneath the thin cotton of the nightdress; the way she sat crosslegged the cotton was stretched tight along her thighs, and he couldn’t help but wonder what it would be like to pull that material up, to run his hands along those thighs, to make love with her in this comfortable bed.

He thought he had better go. He realized that if he stayed on this bed with this girl much longer that things might get horribly out of hand.

He got up. He realized he had the beginnings of an erection, and he put his left hand in the pocket of his kimono to camouflage it.

He looked down at those dark eyes. Yeah, he had definitely better go. And then she floated up off the bed and stood before him.

“Well, no one calls me Richard. Call me Dick.”

She said nothing else, but stood there looking up into his eyes as a film of sweat enveloped Dick’s torso.

He held out his hand and she took it in hers and then put her other hand on it; he felt a hot bloodlike energy flowing from her soft fragile hands into his hand, the heat flowing all up his arm and into his chest, down into his stomach and finally down into his groin. Her eyes stared unwavering into his, and this time he didn’t avert his eyes but joined his gaze with hers, wondering how long this would last before she said something. Or did something.

Finally she said: “Why are you and Daphne here?”

She still held his hand. He didn’t want to look into her eyes, but he found himself doing so, and he felt the sweat trickling down his back.

(Click here to see if Dick goes there. Perhaps now may be a good time to review some of our previous episodes of Larry Winchester’s A Town Called Disdain, a listing of links to which you will find on the right hand side of this page.)
Posted by Dan Leo at 2:57:00 AM

Dick knew what was coming when he went into her bedroom.
And--no way, Daphne's gonna go along. (Many years ago already, she didn't even like it when Steve/Jesus praised another woman's beauty!)So even if, "Call me Dick," gets out now, Hope'll spread the word in her little girl way.