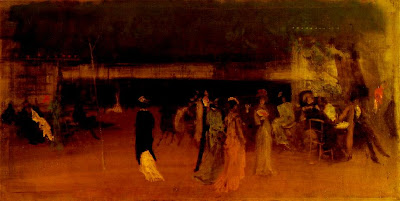 Return with us now to a warm August night in 1963, and to the quaint seaside resort of Cape May, NJ, to which Arnold Schnabel, the author of this Pabst Blue Ribbon Award-winning memoir, has gone with his mother to convalesce after suffering a mental breakdown the previous winter...

It so happened while we were going through the laborious procedure of saying goodnight to everyone that Miss Rathbone and Steve got up to go also, and, sure enough, Miss Evans too.

So now we had to wait until this latter group said goodnight to everyone. I lit up another cigarette, one of my Pall Malls this time, even though my lungs and throat were still scorched and befogged from that French cigarette.

Frank came over to me.

“I appreciated how you didn’t walk out in the middle of my song.”

(Although it did occur to me that if we had slipped out quietly then we would have been a half hour gone by now.)

“I could see that your lady friend — what’s her name, Ariadne?”

“I could see Elektra was ready to go. She’s got the hots for you, boy.”

“Arnold, if there’s one thing I know it’s dames.” Elektra was kissing Sammy goodnight on the cheek. “And believe me, that kid’s got it bad for you. She reminds me of Ava.”

“Call me any time. I want a lyric from you.”

“Well, I can’t promise anything.”

“Yeah, I know. So I hear you’re gonna work with Larry?”

“Good man, Larry. He could be an A-list director, but he’s got a bad habit of telling studio heads to go fuck themselves, you should pardon my French. I’ve wanted to work with him for years. Maybe you could write me a part. What’s the movie about?”

“Something about a young soldier on leave in Paris who gets involved in a murder, I think.”

“Maybe it could be an older soldier.”

“Take care of this girl, Arnold.”

It went on like that for a while, but at last we made it downstairs, with Steve and the Misses Rathbone and Evans in tow.

So now we just had to make it through the dining room and the valley of the old people and we were free. But even this maneuver took at least another twenty minutes. I assured Mrs. Biddle that I would indeed be there for tea the next day, and that in fact I had an appointment there tomorrow morning to get together with Larry Winchester to find out if we were simpático enough to write a movie together.

“Why do you want to write a movie?” said Mrs. Biddle. “They’re such drivel. You should stick to your poetry.”

“Oh, that’s different then I suppose. All right, I can see you’re chafing at the bit, and your girlfriend is eyeing you ravenously, so go.”

At long last we all made it out of the house. We went down the walk to Windsor and made the left on North Street, Elektra and I in front. I felt a tap on my shoulder.

“Arnold,” said Steve, “I want to thank you! That’s the most fabulous party I’ve ever been to!”

“Glad you liked it, Steve.”

I noticed that he was swaying a bit, sort of like Popeye the sailor man, even though he had Miss Rathbone on one arm and Miss Evans on the other. Then I noticed that all three of them were swaying, although not in unison.

“Oh, by the way, who wants to go to the Ugly Mug for a nightcap?” said Steve.

Not me, that was sure, but about ten minutes later we were all milling about outside the Mug, and Steve and Miss Evans and Miss Rathbone seemed to have gotten even drunker on the way.

Elektra said she wanted to go home, she had to work in the morning. Me, I just wanted to be no more hungover than I was already fated to be. Steve was pulling on my right arm. Miss Evans grabbed my other arm. Elektra pulled her arm away. Miss Evans then yanked her own arm away from Elektra’s grasp, accidentally hitting Miss Rathbone in the nose. Miss Rathbone sat down on the pavement. Miss Evans grabbed my arm again. Elektra told her to leave me alone. Steve went around to help up Miss Rathbone, but he tripped on the curb and fell. Miss Evans called Elektra a floozy. Elektra slapped Miss Evans, and then things got so chaotic that it wearies me even thinking of how to recount it all.

But another interesting thing happened during the ensuing brawl, which soon included several young coast guardsmen who had apparently just been thrown out of the bar, plus the bouncers and bartenders who had thrown them out.

What happened was I began to float up, slowly, to about twenty feet off the ground. I looked down on it all, at the tumbling and stumbling bodies, and as I did the shouts and screams faded away as if someone had turned the volume down on God’s television set, or rather switched the sound to another channel, because all I could hear and very clearly was the gentle rushing and hushing of the ocean several blocks away. I rose myself up just a little higher so that I could see the ocean, enormous and dark and alive. And then I looked down again at the humans swirling all around and against each other, not like animals, not like insects, no, but like human beings, and one of them was me. I was trying to pull one of the coast guard boys off of Steve, and then one of the other coast guard guys socked me on the jaw.

I came down, and rejoined my body, sitting on the pavement, next to Miss Rathbone, who had still not gotten up.

She put her arms around me and kissed me.

Next thing I knew Elektra was pulling me to my feet and dragging me down Decatur Street. Then Miss Evans came running up and grabbed my arm for what seemed the eleventh time that night. Elektra hit her on the shoulder with her handbag, and now Miss Evans sat down, holding her shoulder and looking bewildered.

Soon enough, but not soon enough for me, we were at Elektra’s house, at the rear entrance behind her shop.

She turned her back to the door and pulled me to her.

We were both out of breath, both sweating. My jaw was numb where the coast guardsman had punched me, but it didn’t hurt, at least not yet. Elektra’s warm butterscotch smell mingled with the moist scents of honeysuckle and ivy and roses and the clean sea-weedy smell of the ocean.

I suppose modesty forbids me to go into what happened next. I could go ahead and write it out; after all it was interesting, and included some things I had never done before, not to mention some things that had never before been done to me, but what’s the point, I know I’ll only end up crossing it all out. God forbid my mother should find it. But now that I think about it, even if I could be absolutely sure my mother would never see it, it seems to me perhaps that some things become lessened once I put them into words. And I wouldn’t want that to happen.


(Click here for our next PG-rated chapter. And please consult the right hand side of this page for an up-to-date listing of links to all other extant episodes of Arnold Schnabel’s Railroad Train to Heaven™, a Sheldon Leonard Production.)

And now a word from Miss Marianne Faithfull:

Maybe Arnold will loosen up a bit next time, Manic. Let's keep wishing and hoping...

The writing's gorgeous and Arnold remains a supremely sexy saint.

Graphic sex scenes? Arnold's right; tell too much and all those exquisite explorations turn ugly and/or vapid.

Do we have a running tally of all of the names that Elektra has been called and by whom?

ARNOLD TOO CONFIDENT TO BE BELIEVABLE

Jen: I don't have a running tally, but I do think "floozy" is a bit unfair...

That Frank sure is pushy when it comes to getting his mug on the silver screen.