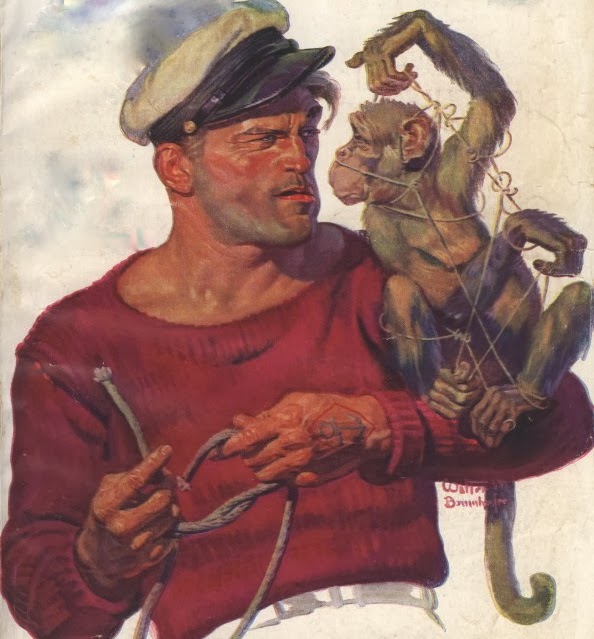 Let’s return to that Greenwich Village hotspot the Kettle of Fish on this hot wet night in August of 1957, where we rejoin our hero Arnold Schnabel and his stout companions Big Ben Blagwell and Ferdinand the talking fly…

(Please go here to read our immediately preceding chapter; click here to to return to the fog-shrouded ancient beginnings of this 79-volume Gold View Award™-winning memoir.)

“We have it on the authority of Arnold Schnabel’s own chef-d'œuvre that he preferred his surname to be pronounced not to rhyme with ‘able’ or ‘Abel’ but with ‘wobble’ or ‘bobble’, as in the hypothetical sentence ‘The gait of an Arnold Schnabel sentence may sometimes wobble, and indeed sometimes our author seems fair to bobble the metaphorical ball of meaning, but in the end, sometimes a page or two later – when that period sometimes almost abruptly appears – all becomes clear, and, yes, beautiful.”  – Harold Bloom, in the Boxing Illustrated Literary Supplement.

It felt odd, but I seemed to be taking command.   Maybe it was the ambrosia-laced bock I had just drunk.   Maybe I was just getting fed up with what felt like years of nonsensical delays.

“Just one question though,” said Ben. “Where we going?”

“To a bookshop across the street,” said Ferdinand. “Mr. Peabody’s Book Shop.”

“You act like it’s some great hardship to hit a book store now and then,” said Ferdinand.

“I wouldn’t call it a hardship, exactly,” said Ben. “But a book shop?”

“You’re really not a very big reader, are you, Ben?” said Ferdinand.

“Look, pal, like I told you before – I read. I read a lot, especially on them long ocean voyages, out on the high seas, doing a man’s job, on them long lonely nights without a dame in sight, when even that new young ship’s steward starts to look good. I read.”

“I don’t mean like Man’s Adventure magazine, that kind of crap,” said Ferdinand.

“Man’s Adventure magazine is not crap,” said Ben. “There are a lot of like historical articles in that magazine.”

“Oh really,” said Ferdinand. “Like ‘I Was Held Prisoner by the Jap Love-Harlot Torture Squad’?”

“You read that one?”

Suddenly Norman Mailer’s back straightened up, he shook his head and then spun around on his stool.

“Jesus Christ,” he said. “The Almighty. But there is no Almighty. Only our struggling savage souls, singing sad songs susurrant, sometimes screaming, soaring to the stars and thence sinking sibilant into the sewers of sorrowful space.”

I said nothing. I had nothing to say.

Norman blinked, and then his face seemed to fall in on itself. His shoulders slumped and his head sagged. His eyes closed, but at least he didn’t fall off the stool.

“Well, that was one Planter’s Punch too many,” said Ferdinand.

“I got nothing against book shops,” said Ben. “But like, don’t you have to wear a suit to get in one? Or at least like a dress uniform?”

“What the fuck are you talking about? We ain’t talking about dinner at ‘21’. It’s just a place you go to buy a goddam book or two.”

“I realize that,” said Ben. “I was only asking a civil question. Jeeze, you don’t got to jump all down my throat –”

“Hey, guys,” I said. “Can we continue this discussion on the way? I really want to get going.”

“Just one minute, Arnie,” said Ferdinand. He flew around in a circle and then stopped a few inches in front of Ben’s nose. “Ben,” he said, “let me ask you a question, have you ever actually been inside of a book shop?”

“Well, what do you mean exactly by ‘book shop’?” said Ben.

“Books and nothing else?” said Ben.

“Sometimes magazines, too,” said Ferdinand. “Maybe maps and such other sundries. But primarily books.”

“Okay,” said Ben. “Fair enough.” He took a drag on his Sweet Caporal. “But before I answer your question, may I first ask you a question?”

I sighed, but Ferdinand said, “Sure, big guy. Ask away.”

“Let me ask you this question,” said Ben. He tapped his cigarette with a finger, and watched the ash float down to the floor before continuing. “My question is,” he said, “would the book rack in a drug store or say in a bus station count as a bookshop?”

“You have never been inside a book shop, have you, Ben?”

“I am going on,” said Ben. “Like I say, when I have bought one of these books, it’s usually like always when I’m at the  drug store picking up a carton of Sweet Caporals, y’know? So I’m like killing two birds with one stone – buy some smokes, grab a good book while I’m at it, especially one that’s like got some good, you know, historical stories, like this one I read about these French lace panty commandos that broke into this gestapo castle of torture, and  –”

“What?” said Ben. “You got something against drug stores now?”

“Okay,” said Ferdinand. “What about libraries? You ever go into a public library?”

“Yeah,” said Ben. “Don’t you need some kind of special card to go into one of them liberries?”

“What’s it matter where you buy it, right?”

“Mwaahh,” said Norman Mailer, and his head popped up from his chest, his eyes opening wide.

“Hey, we’re taking off, Norman,” said Ben. “It was good jawboning with you, buddy.”

He gave Norman’s shoulder a pat with his great hand, and Norman swayed on his stool but somehow didn’t fall off it.

“Okay, goodbye, uh, Norman,” I said, and I turned about-face and started hobbling away through the crowd.

“You believe that idiot Ben?” said Ferdinand, who had flown into my ear.

“He means well,” I said in a low voice. “He just hasn’t had the benefit of a good education.”

Ben had now caught up with us.

“What are you guys talking about?” he said.

“We were just talking about how fucking unbelievable you are,” said Ferdinand.

“Unbelievable?” said Ben. “I think I’m a very believable character. A little bigger than life maybe, but, hey, that’s me.”

“Love me or leave me,” said Ben. “I’m just a big brawling bruiser and a booze-imbibing, broad-banging battler –”

“Okay, enough!” said Ferdinand. “Christ, you’re as bad as Norman over there with the alliteration already.”

There were two people perhaps above all in all the universes I had passed through whom I not only had no desire to see again but whom I actively wished never to see again, ever:

One was the prince of darkness, under any of his names or guises.

And the other one was the supposed heroine of this fictional universe I was now attempting to escape from.

And there she was standing in front of me, bedraggled and wet in her wrinkled grey jacket and skirt, her dark hair now darker and wet and flattened on her skull, her eye make-up and her lipstick smeared so that her face seemed out of focus, like a face on a TV set with a bad reception.

As surprised and shocked and despairing as I was, nevertheless I was just about to say hello back to her as politely as I could under the circumstances, but I was prevented from doing so as she swung her hard black purse upward in a roundhouse arc and slammed me on the side of my face with it, felling me as suddenly and as surely as a sharp right hook from the great Marciano would have done.

(Continued here, because Arnold may be down but, don’t worry, he’ll get up again.)

(Kindly look to the right hand column of this page for a rigorously current listing of all other published chapters of Arnold Schnabel’s Railroad Train to Heaven©, this week’s episode sponsored in part by Uneeda© Biscuits: “Try your Uneeda Biscuits next time with just a schmear of your favorite cheese spread!” – Horace P. Sternwall, author of “Cheese and Crackers” and Other Poems About Snacks; the Olney Community College Press.)
Posted by Dan Leo at 1:18:00 PM

Give Emily some gloves and a jump rope. Having started kick boxing, I think it'll help her. You have to be strong and agile but it's not like surfing the highway a la rollerblading.

Ha ha – with her hard black purse she doesn't even need the gloves!

Cold cream? You're right. No need for rigorous exercise. I wonder if it's still sold in glass jars.

Pond's cold cream in the "economy-size" jar. So much more efficient than karate classes!