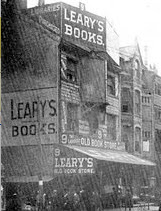 Arnold Stang played downtrodden schlemiel Cornelius Doyle, saddled with a harridan wife (Dolores Fuller) and four brutish drunken sons (Michael J. Pollard, Michael Parks, Richard Beymer, George Chakiris). Every episode began with Cornelius escaping the morning chaos of his Mascher Street rowhome and racing to catch the 47 trolley to go downtown to work at Leary’s Books (“Oldest Book Store in the Nation”), where he would happily lose himself in the musty world of old novels, histories, and memoirs. Even though he has worked at the store for over twenty years he remains a lowly clerk, completely devoid of ambition, and actually not very good at his job, as he is wont to spend his time lying on a stack of volumes in the store’s cavernous basement, reading some obscure novel of Arthur Machen or the Brothers Goncourt. Nevertheless each day brings some sort of mild drama, such as the day Cornelius gets trapped in the old wrought-iron elevator, or the one where his hand gets stuck in a pneumatic message tube, or that tour de force wherein he uses the basement toilet and the knob breaks off and he remains imprisoned till the next day with only Mme de Sevigny's letters to her daughter to keep him company .

Each episode ended with Cornelius reluctantly returning home to his screaming wife and brawling sons.

Unfortunately Cornelius Doyle aired in the same time-slot as the juggernaut that was M Squad, and its quiet charms failed to find a large audience. After eight classic episodes it was gone for good, as forgotten as the moldering 19th Century novels in Leary's basement.


(Turn to the right hand side of this page for a complete listing of other Great Lost TV Shows.)
Posted by Dan Leo at 1:37:00 AM