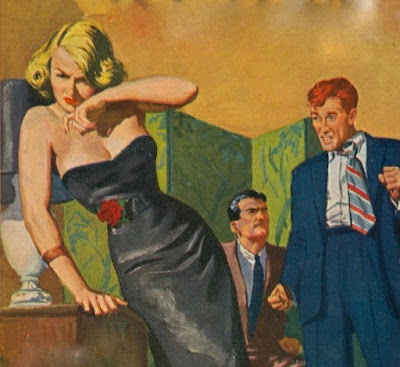 Hobart Hobson (né Harold Hickelmeier) was a ham-and-egger, and he knew it. At the age of forty-one, he had never played a lead role even once, not even in summer stock. He had peaked at the age of twenty-five when he played the chauffeur in a Katherine Cornell show. The next season he got a smaller part as the gardener in a comedy with the Lunts, but after that it had been all down hill. He eked out a living playing spear-carriers, the cop who didn’t say much, the brother-in-law who gets killed in the first act. He took anything he could get in radio and TV, which wasn’t much, and at least in summer he had stock, which meant three hots and a cot in the Berkshires or on the Cape, while he made a few bucks subletting his railroad flat at Bleecker and the Bowery. But he stayed with it, because he didn’t know how to do anything else, and there was always the hope that someday, somehow, he would catch a break.

And then he met this guy named Larry Winchester at Bob’s Bowery Bar.

“Excuse me, buddy, didn’t I see you on an episode of China Smith, with Dan Duryea?”

“Maybe it was Dragnet then?”

“Wait, I think it was one of those Aunt Jemima Showcase Theatres?”

“Oh, you saw that episode?”

“You were the thug that got killed by the other thugs for ratting them out.”

“You made an impression.”

“Winchester, Larry Winchester. Maybe you heard of me. I write and direct movies. Showdown in a Town Called Hades?”

“No matter. You working now?”

“Well, uh, I’m up for a part in this new Charlie Laughton show I think, but, um, nothing definite –”

“Hobart Hobson, great name. How’d you like to play the lead in my new movie, Mr. Hobson?”

“I need a replacement quick, because the guy I had just broke his leg falling down the subway steps when he was plastered.”

“The part is perfect for you. You play a journeyman actor who gets caught in a web of murder and betrayal. I can only pay you scale but I can toss in let’s say a double sawbuck a day per diem. It’s two weeks’ work, starting next Monday. What do you say?”

“Larry. And may I call you Hobart?”

“Of course, Larry. And, may I ask, what is this picture called?”