“A Town Called Disdain”, Episode 27: on the mesa 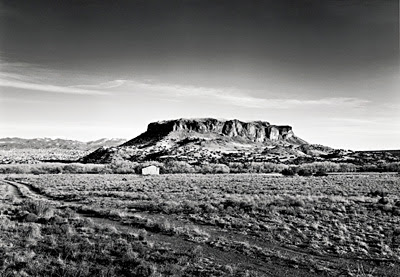 The time is September, 1969. The place is the wasteland neighboring a small town called Disdain, in New Mexico, “The Land of Enchantment”. Our recently discharged young soldier Harvey has been hired by the blowhard rancher Big Johnstone to act as guide for the mysterious and glamorous Dick and Daphne “Smith”...

The sky had hardened out into a great steel dome, and they sat on their horses on the eastern edge of a tall mesa, looking out at a tiny town like a toy-train village about five miles out there in the desert, clear and precise, a small square grouping of bone-colored split-level houses radiating from a grey empty square with a few larger buildings around it like building blocks. One of the buildings had a squat rectangular steeple with a tiny black cross on it.

“What’s that down there, Harve?” said Dick.

“That’s one of them atomic towns. Fake towns the government built to blow up in the A-bomb tests. Sometimes they got blown clean up and sometimes they was set far back enough so's they only got the glass blown out their windows. This was one of them kind of towns.”

Harvey paused a moment, looking at Dick. Daphne simply sat on her mare, one leg swung over the pommel, staring out at the desert.

“That’s all radioactive and shit down there,” said Harvey.

“Mister, I grew up around here. And it can be pretty bad. See that little holler down below?”

The mesa sloped down fairly sharply a couple of hundred feet and at its base was a semi-elliptical depression about the size of a football field.

Harvey slid off his palomino, picked up an empty Falstaff beer can from the ground, reared back and tossed it down into the depression below.

The can disappeared into the rust-colored sand without raising any dust or leaving any trace.

“Atomic sinkhole,” said Harvey. “Got a bunch of ‘em round here. Most of the locals that got any sense know where they are, but we lose a few tourists in ‘em every year.”

“Ooh, look at those flowers,” said Daphne. “I’ll be right back, boys.”

She reined her horse around, kicked it, and galloped off toward the southern slope of the mesa. She brought the mare up short near the edge in a cloud of dust, dismounted, and bent over to look at a growth of some sort of white scrub blossoms.

“How about a cigarette break, Harve?” said Dick.

Dick swung down from his Appaloosa, patted its neck and murmured something to it, then walked over to where Harvey now squatted, looking out into the desert. Dick sat down crosslegged, lit Harvey’s cigarette and then his own. He took off that stupid Australian hat and ran his fingers through his hair.

“I guess you’re wondering what this is all about, Harve.”

Harvey didn’t answer right away. But then --

“A hundred clear a day covers a lot of wonderin’, Mr. Smith.”

Dick put his hat back on.

“Harvey, I have to tell you. My name’s really not Smith.”

“Never thought it was.”

“Pleased to meet you, sir.”

For a moment or two they just sat and squatted there, smoking, staring out at the desert. From seemingly far away they could hear Daphne singing.

Dick had a few ready-rolled in the left breast pocket of his jacket, and he handed one to Harvey. Keeping his own cigarette lit, Harvey let Dick light up the joint with his Ronson.

Dick had trouble making friends with men. The sad fact was that men bored him. Even with some of the really brilliant men he had met -- Dr. Einstein, Jean-Paul Sartre, Aldous Huxley, Joseph Campbell, Steve Allen, D.T. Suzuki, Hermann Hesse, that old brujo in Cuba -- he still got bored if he stuck around too long.

But oddly enough he felt un-bored around this laconic young fellow.

“I’m looking for something, Harve,” said Dick, toking. It was very strong Thai stick. Like Harvey he kept his tobacco cigarette lit in one hand while toking on the joint. “I just don’t know what it is.”

“Skip the cryptic talk, Mr. Ridpath, and give it to me straight.”

He took the transistor radio out of one of the many pockets of his jacket.

“I’ve been getting messages from this thing,” he said.

Harvey had the joint now, and he toked.

“Okay,” he said. “So you’re insane. Thanks for letting me know.”

Dick looked at the transistor.

“I guess it does sound crazy.”

“Yep. Dat it do,” said Harvey, and he passed the joint back to Dick.

“Oh, well,” said Dick, and he put the transistor back into his pocket.

“Maybe I am crazy, but a voice did tell me to come down here, and it also told me to hire a good local guide with a military background. And there you were.”

“I thought Mr. Johnstone hired me.”

“Well, that’s true, but he hired you specifically for us.”

“He thinks we’re big-time drug dealers, so he’s sucking up to us.”

Harvey realized he had been toking on his cigarette, thinking it was the joint, which was now magically back in his other hand. He caught a taste of burnt filter and flicked the butt away over the slope.

“So you ain’t drug dealers?”

Dick stubbed out his own cigarette in the dirt, field-stripped it, and put the filter in his right side jacket pocket.

“No,” said Dick, “We’re not drug dealers, but I have a friend back in Frisco who is a big-time LSD manufacturer, and he does business with Big Jake, and Big Jake owes him a favor. My friend told him to give us whatever we needed.”

“Apparently, yeah. He’s a wholesaler for this whole section of the state.”

“Well, I used to be career navy, but I had to retire a few years ago. I --” Dick toked, “fell afoul of --” and toked again, “certain powerful elements.”

“Got in trouble with the brass, huh?”

“Yeah,” said Dick, and he looked at his scarred fingers.

“Mr. Smith --” Harvey reached out for the joint and Dick gave it to him.

Harvey took a big long toke and held it in.

Dick fixed him with those beautiful blue eyes.

Dick grabbed the joint out of Harvey’s convulsing hand.

Daphne cip-clopped up to them on her mare, holding up a bouquet of white Spanish bayonet blossoms.

“Are you two talking about me? Look, Dick, look at the funny flowers I found. I’m going to put them in our room. Give me some of that joint.”

She floated down from the saddle like a fairy princess and she strode over to them like a warrior queen. Dick handed her up the joint and she toked.

As Harvey’s laughter subsided and drained away into the air the ground seemed to rumble under his feet, and the westerly wind smelling of creosote seemed to grumble.

Daphne had undone the top few buttons of her pink shirt, and Harvey stared at what he could see and what he couldn’t see of her breasts, which seemed to have grown larger as she filled her lungs.

He was very high.

“By the way, there’s some sort of very dodgy-looking truck riding up toward us.”

Harvey stopped laughing. And now he could hear a truck’s motor and he realized he had been hearing it for the past minute or so but had been too stoned to notice it.

“What kind of truck?” he said.

“I don’t know. It was like one of those sad trucks at that Hideyway place.”

“Yeah, kind of like an army truck. One that’s been through a few nuclear wars.”

An old two-ton army truck nosed up over the west side of the mesa, lowing like some monstrous cow giving birth, and even at this distance of a quarter mile Harvey recognized that ugly cauterized paint job.

“Ah, shit,” he said again, and stood up, unclasping the flap on his pistol holster.

(Click here to go to our next thrilling episode. And do check out the right hand column of this page to find up-to-date listings of links to other chapters of A Town Called Disdain, as well as to appreciations of many of Larry Winchester’s classic films. And remember to check your local listings for the re-release of Larry’s restored 1962 cinematic Bildungsroman In the Graveyard of My Youth starring Dennis Hopper, Sandra Dee, Annette Funicello, and Paul Lynde.)

Tommy's hairdo makes him look like he was partially devoured by during a yodeling stint that went terribly wrong.

Anon: I think we might attribute that transition to the strength of the Thai stick that Harvey's smoking.

Jennifer: I think we might attribute Tommy's song to the strength of the Thai stick he was smoking. I only we I had a video of Tommy doing the five minutes-plus album version of the tune. And Tommy's hair rocks!

I hate you Dan Leo for putting that Tommy James video up.

The Bitter End performance of Crystal Blue Persuasion and the eye antics of Joan Jet's version of Crimson and Clover are worth a look.

Along with Donovan and who else? Some of the best of "psychedelic pop" to ease the pain of transition to the 70's.

Ed, I hate myself for putting that video up. Now I can't get the song out of my head!

Watch the Bitter End performance of Crystal Blue Persuasion, that cure ya by insidious substitution.

Damn, Starkski, I did look up that Bitter End performance of "Crystal Blue Persuasion":

And Tommy and the boys did rock out.

Now I gotta get off my ass and finish transcribing the latest Arnold Schnabel episode...