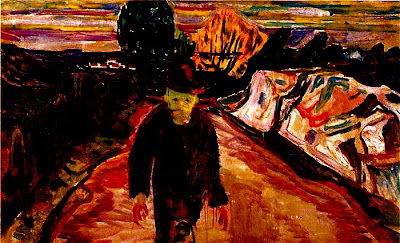 This long-lost American epic (serialized here exclusively for the first-time ever in all its uncut glory) continues as Larry Winchester takes us deeper than perhaps we would like to go into the haunted sub-basements of the mind of Captain Alexis J. Pym, USN:

At long last everyone else was gone. He could feel the great slumbering beast that was the Pentagon purring softly all around him. He left his cell and went down the corridor quietly to Dick’s office. It was kept locked during his absences but during his short and infrequent periods in residence Dick never bothered to lock it, usually never even shut the door.

Pym took one last look up and down the narrow corridor and then stepped inside, closing the door gently behind him. He tiptoed through the darkness to the desk. He knew the way. Feeling for the metal chain of the desk lamp. An old tarnished metal gooseneck lamp that Dick had found in an abandoned train station in Montana.

And the light came on revealing the wonderland of Dick’s world.

Pym went around and sat in Dick’s chair, that absurdly comfortable wooden swivel-chair with its oh so silent and smooth ball-bearing casters. It had been given to Dick by Dick’s mother, to whom it had been given by Harold Ross, the New Yorker editor. (Having formerly belonged to Ambrose Bierce.)

Beyond the bright splash of lamplight on the desk Pym could see Dick’s furnishings all about the small cozy room. The filing cabinets, which he knew were filled with everything but files: books, letters, souvenirs, clothing. Over in a corner his golf bag and clubs. Hanging from industrial metal hooks screwed into the walls were his tennis racquets, his scuba equipment. Hanging between two adjacent walls from the same sinister hooks his hammock of Nigerian hemp netting. Shoved in another corner, his seabag. And all over the walls Dick’s own bamboo-framed Japanese-style brush-and-ink drawings.

Pym leaned forward and smelled the old wood of the desk. No doubt like the chair it held some glamorous history, but he would never ask. (There was a rumor that the desk had once belonged to Joseph Conrad. Only a rumor.)

He set to work. What new treasures had Dick brought? There was always something, and it was never hard to find. Usually on this first day of his return Dick would simply lay his new stuff right on top of the desk. Or maybe it would be carelessly shoved into a top drawer left only partially closed.

A postcard from W. Somerset Maugham.

A snapshot, smeared with wine and some sort of sauce or gravy, of Dick, his arm around the waist of the Dalai Lama.

A long, philosophical letter on the subject of evil from Dr. Albert Schweitzer.

The business card of a whorehouse in Rangoon: For Discriminating Gentleman’s Happiness.

An empty box of Craven A cigarettes.

An unemptied ashtray from the Sands Hotel and Casino, in Las Vegas.

And in the top right drawer Dick’s Browning Hi-Power. With loaded magazine. How many men had Dick killed with it? Pym would never know. He was not permitted to know.

In another drawer various pillboxes and vials.

Pym opened one of the pillboxes and swallowed one of the pills that were in it and soon he was sitting in that chair watching and feeling his mind dissolve. He staggered and reeled his way back to his own cell, it took centuries, eons, epochs, it took the thousandth part of one millisecond, and the walls and the floor and ceiling of the corridor tried to suck his body and his soul into them, and the fluorescent light was turning him into fluorescent light, and finally he passed through the great portal of sadness into his own cell and closed the door and lay on the floor and his pale and paltry self expanded like some great engorged bloated jellyfish until it filled every empty molecule of the cell, his gently breathing throbbing self pressed gently but solidly up against every inch of the inside surface of this white concrete box, his mind trying to enter and become one with the cool concrete, with this enormous building, with the earth and with the universe, trying but ultimately failing.

By the next morning as the drug finally wore off he was convinced finally and forever of his own insignificance and meaninglessness. But he got through that day as he got through all the succeeding days, by dint of habit, and fear, and something else. A feeling that he must stay here. He must see this thing through.


(Kindly go here for our next formally rigorous chapter. And please turn to the right hand side of this page to find listings of links to all other extant episodes of Larry Winchester’s A Town Called Disdain™, an American International Production.)

You're such a great describer. I could almost imagine the entire setting.
Poor Pym, though. Being all meaningless, yet not wanting to break free out of his routine.

When I don't like what's going on with me, I wonder just who would I rather be? The answer's always: no one else.
Certainly, I'd hate living poor Pym's life? But Dick? Wonder if he'd trade for six months or so?

It's all too beautiful, Dan.
Poor Pym. I know that feeling.

This is what Pym gets for poking around in Dick's stuff.