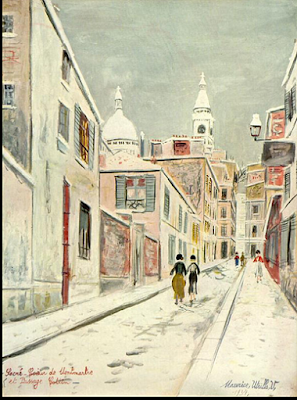 It had been another good day for Gerry “the Brain” Goldsmith; after less than a month of work on assembling his book of philosophical reflections (his latest title: God is Only Dog Spelled Backwards), today he had not only finished his third page, but got a start on the fourth. He left the sheet of paper in his old Royal portable (all ready and waiting for tomorrow’s assault on immortality), pulled on his threadbare chesterfield and left his little room on the sixth floor of his Bowery tenement.

On the third floor landing he came upon his landlady, young Mrs. Morgenstern, who appeared to be prizing up a wad of chewing or bubble gum from the floor with a butter knife.

“And a good day to you, Mrs. Morgenstern.”

“Fourth page already! By this rate it should be done in another ten years, no?”

Gerry continued on down the stairs.

Ah, Mrs. Morgenstern! Would only that he were twenty years younger, or even ten years! Five years? No, that was stretching it…

He went out into the biting but bracing cold and around the corner into the smoky and comforting warmth of Bob’s Bowery Bar.

The after-work crowd was all there, even though most of this crowd didn’t work.

Gerry found an empty stool between Hector Philips Stone (the doomed young romantic poet) on his left, and that strange little guy Billy Baskins, on his right.

Gerry had worked hard today, and now he was due his reward, a fine brimming mug of Bob’s basement-brewed bock.

He had enjoyed that first soul-satisfying deep swallow when suddenly Hector spoke, out of nowhere:

“What was it like in Paris, in the Twenties?”

Paris, in the Twenties.

Two years spent idling in cafés, wandering the streets, going to movies, sleeping the greater part of each day away.

Yes, it had been a good time, or as good as time got.

As good a time as any time of Gerry’s had got.

“It was pretty great, Hector,” he said, and he remembered with fond amusement the one time he had tried to visit the Louvre, only to find the place was en grève, on strike, and he never did manage to make it back there again. It was hard to get to museums when one slept until two or three in the afternoon every day, and it was so much nicer to wake oneself up in a civilized fashion, sitting at a table drinking café au lait, reading an abandoned French movie magazine and watching the girls walk by.

“Did you ever meet Hemingway, or Picasso, or Gertrude Stein?”

“Well, you know, Hector,” Gerry prevaricated, “one couldn’t help but run into all sorts of people in those days, in Paris.”

“I guess those were pretty wild times,” said Hector.

Wild times? Was sleeping into the afternoon, sitting in cafés, walking idly around and going to movies what one could reasonably call wild times? No, but why disappoint the young fellow?