On this cold and grey November afternoon Reggie Wertham sat on an upside down Andy Boy crate in the alleyway next door to Bob’s Bowery Bar, drinking from a quart bottle of Tokay wine. He would much rather have preferred to be sitting and drinking in the warmth of Bob’s establishment, but, alas, he was short of funds, and had only fifty cents in his pocket, which was enough for a cot in the Parker Hotel, the cheapest flop on the Bowery, or, alternatively, the plat du jour at Ma’s Diner, but not both.

The thing to do was to drink the Tokay slowly, to try to savor it and make it last, and not guzzle. But of course Reggie guzzled – he was not a man of great self-control, which was only one the many reasons he was on the bum and had been for ten years.

Suddenly a swell-looking chap in a camel’s hair topcoat tumbled into the alleyway.

The man collapsed against the brick wall and slid down to the cobbles next to Reggie.

The man’s chin fell to his chest. He was wearing a nice-looking felt trilby hat, with a blue feather in it.

Suddenly his head popped up again.

“Cyrus. The king!” said the man, and his head once again slumped forward.

His shoes were shined, cordovans. His blue socks looked like silk, with tiny black and red clocks.

The head popped up once more.

“Jayzon anna fuggin Argonauts!” said the man, and this time he slumped completely over against the Andy Boy crate.

The man began to snore.

The guy looked like he could spare it, so Reggie got off the box, reached into the camel’s hair, and found the guy’s wallet.

Three hundred and forty-three dollars, in fifties, twenties, tens, fives, and singles. Reggie put three singles back in the wallet for carfare, he was not a brute, and he stuck the wallet back into the guy’s flannel trousers. He was just about ready to go, when he figured what the hell, pulled the fellow’s camel’s hair coat off, and tucked his own ragged old gabardine around the guy. For good measure he took the man’s hat, and replaced it with his own foul old woolen watch cap. He left the swell his nice suit and shirt, his shoes and socks, but he took his neck tie, which was silk, with a red and grey regimental pattern.

A brief cab ride later Reggie presented himself at the front desk of the venerable Hotel St. Crispian.

“I should like a room, with a view,  and I shall pay in advance for one week.”

“Of course, sir,” said Mr. Bernstein, who was used to bearded but well-off eccentrics. For all he knew this not very fresh-smelling fellow was a Nobel laureate, a famous professor, author, or sculptor.

“Would you like me to reserve you a table for dinner, sir? I ask because we still have a table available for the eight o’clock seating.”

“Are you always so busy for dinner here?”

“Ha ha, I wish we were, but, you know, it’s Thanksgiving, and we always fill up for our famous ‘Turkey ‘n’ Trimmings’ table d’hôte.”

Today was Thanksgiving? Reggie had had no idea! After all, a holiday was just another day on the Bowery.

“Yes, by all means,” said Reggie, “a table for one for the eight o’clock seating, please.”

At last, a Thanksgiving with something to be thankful for. In another week he would doubtless be back on the Bowery, but that was the future, and the future was for squares.


(Artwork by the talented rhoda penmarq. Kindly click here to read the fully-illustrated version in A Flophouse Is Not a Home.) 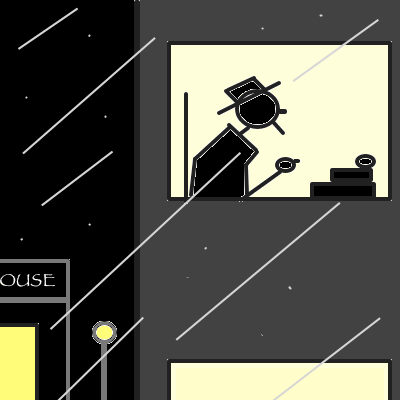 Harry Beachcroft had one rule, which was to knock out ten pages a day, no matter how hungover he was. He gave himself one day a week off, Sunday, which meant he could really tie one on Saturday night at his favorite stop, Bob’s Bowery Bar, conveniently located just around the corner from his fifth-floor walk-up at Bleecker and the Bowery.

Today was Monday, a grey November Monday in the year of our Lord 1950. Harry rose at noon as usual, and went down to Ma’s Diner across the street for his usual breakfast, scrambled eggs, scrapple, hash browns, burnt toast, and lashings of black coffee while he read the Times. You never knew, you could get a good story idea from the Times. He left his usual fifty-cent tip, then crossed the street again and went back up to his one-room flat and his battered old second-hand Royal portable.

Harry rolled a blank sheet of paper into the machine and lighted up a Philip Morris Commander. At present he had at least a dozen stories out circulating at the pulps, and three novels (a western, a detective, an exotic oriental adventure) making the rounds of the paperback publishers. He’d finished up his most recent novel on Saturday, so now it was time to start a new “project”.   What would it be, a short story, a novel, maybe a serializable novella? As usual, he had no idea. But something always came to him, something clicked in his brain once he’d rolled that blank sheet into the machine and lighted up that first Philip Morris.

Barry Beecham had one rule, and he stuck to it. Ten pages a day, no matter what. Rain or shine, horribly hungover or just normally hungover, he always ground out ten full pages before he let himself call it quits for the day and went around the corner to Big Bill’s Bar and that first gloriously satisfying mug of bock.

Barry picked up a fresh sheet of typing paper and rolled it into his old Remington standard, a gift from his father on his matriculation at Yale.

Barry had just finished a story the day before, so it was time to start a new one. What would this one be? A science fiction yarn? An African jungle adventure? Maybe a war story – they were always fun to write, even if Barry had been 4-F (chronic bunions) himself. Whatever, something would come, who knew, maybe a new novel? He had made a cool three hundred bucks from his last one, Range Riders of the Open Steppes, about a band of cowboys in Czarist Russia, pulling off “one last caper” – robbing the fabled Orient Express!

Barry lighted up a Camel, and started typing:

Larry McGarry had one steadfast rule. Ten pages a day. Come hell or high water, that was his quota, ten pages, and he never let himself go across the road to Phil’s Roadhouse for that first cold “English style” ale until he had finished those ten pages…


(Illustration by rhoda penmarq. Click here to read the more lavishly-illustrated version in A Flophouse Is Not a Home.)
Posted by Dan Leo at 12:16:00 PM No comments: