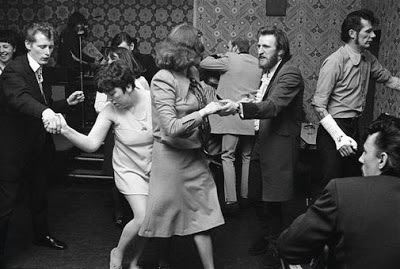 Our hero Arnold Schnabel has assumed the corporeal host of “Porter Walker”, a preposterous young poet in Ye Cannot Quench (Houghton Mifflin,1960), a sadly-forgotten Bildungsroman by Gertrude Evans, author of many other unfortunately out-of-print novels, such as A Handful of Infinity, Night Bus to Tallahassee, and He Said His Name Was Gerard.

Let’s rejoin Arnold and his deific friend Josh just as they are about to re-enter a peculiar basement bar called Valhalla, on Greenwich Village’s MacDougal Street, on a hot and rainy night in August of 1957...

(Please click here to read our previous chapter; the morbidly curious may go here to return to the misty beginnings of this Gold View Award™-winning 53-volume memoir.)

“I keep telling myself it’s time to go back and re-read Proust in the original just one more time before I kick the bucket, but all I do is read Arnold Schnabel. I know, I’m crazy.” — Harold Bloom, in The Cape May Star and Wave.


I pulled the door open, and, a gentleman to the end, I waved at Josh to go first, and he did, and I followed him.

Somehow the barroom had gotten yet more crowded, more noisy, even though no one new had entered while Josh and I had been talking outside. Perhaps people had come in from the back room, or from the sub-basement, or from hidden doorways I knew nothing about. I didn’t care. I just wanted to make it to the men’s room before I peed myself.

The small dance floor — or rather, that small space between the booths and the bar in which people were dancing to the juke box music, or not so much dancing as thrashing against one another — presented a packed churning mass of humanity, and within it I could see the dark airborne hair of Carlotta and her face and her almost bare shoulders and the thin straps of her red dress, and the blond hair and the face of Pat in her black dress. They were dancing side by side, and then I could see first Sam Clemens and then those other two guys Walt and Edgar, all of them dancing, if not exactly with the girls, then at least very close to them.

And finally — although I knew who Sam Clemens was, because he had told me — it dawned on me who this Walt and Edgar were, somehow I hadn’t quite put it together when I had been here earlier this same night which felt to me like approximately twenty-seven months ago — the bearded grey-haired guy was none other than Walt Whitman, the poet they named the bridge after, and the other dark-haired guy with a moustache was the famous poet and author Edgar Allan Poe. I must admit here that I was not familiar with the work of either of them, because even though I am addicted to writing bad poems myself, I find the reading of poetry, even my own, especially my own, to be well-nigh intolerable. I know that Poe wrote short stories also, but the few I had attempted to read struck me as just as boring as the few of his poems I had glanced at, although I did enjoy that movie The Raven with Vincent Price and Peter Lorre, which I saw at the Fern Rock shortly after my release from Byberry.

Thurgood and that fat guy Henry were standing with their drinks at the end of the bar right near the entrance.

Henry. Henry James was it? Yes, and now I got it, finally, another one of those famous dead authors I had never really read, although I did get through a few pages of The Turn of the Screw one time in the army because it was available in one of those free Armed Services Editions paperbacks and the other guys had already grabbed up all the good ones about guys trapped in webs of passion and betrayal and violence. I had thought this Turn of the Screw book wouldn’t be so bad because at least it was short, but I was wrong.

All these thoughts passed through my brain in a matter of perhaps two seconds, during which Thurgood and Henry James saw me and Josh and descended on us.

“Where have you two been all this time?” said Henry. He pronounced “been” bean, even though I think he was American, but what do I know, that’s the way Fred Astaire and Bette Davis used to talk in old movies, so maybe it was just an old-fashioned way of talking. Or maybe it was pretentious. I didn’t really care either way, I had to go to the bathroom.

Then things got very complicated. All of a sudden there was a shrieking, a dual shrieking over the shrieking of the jukebox music, which, if memory serves, was “Good Golly, Miss Molly", and Carlotta and Pat were pushing and elbowing their way ruthlessly through the crowd toward us, with Sam and Walt and Edgar in their wake.

I won’t even attempt to transcribe the dialogue that now transpired. Everyone was talking at once anyway, except for me, the words and the surrounding music and noise lapped up against me and around me and into my ears, making little intelligible impression, as has so often been the case in my life, in any of my lives, in all of them.   I suppose I was rude, but I really did have to go to the men’s room, and so after a minute of this babble I said, “Well, look, everybody, I really have to go.”

“Mr. Dramatic Poet,” said Carlotta. “Always gotta be someplace, huh? What is it, a date with another swooning frail?”

“I should like to come, too,” said Walt. “That is if I may. Might I suggest if you have no other destination in mind a stroll down to the docks and to one of the taprooms down there which cater to hearty stevedores and seamen and the bold strapping barge boys of the great river Hudson?”

“Ya know what’s a good stop?” said Edgar. “That Bridge Café over to Water Street. Many’s the late night I whiled away there absorbing endless drams of hot spiced rum back in the good old days.”

“Look,” said Thurgood, “before you go, I wonder if you could spot me a tenner?”

“Anything at all, really,” said Thurgood.

Suddenly the song on the jukebox ended, and into the attendant silence he spoke loudly and clearly:

“He has to urinate.”

“He said he has to urinate,” said Henry.

“Why didn’t you just say so in the first place?” Thurgood said to me.

Another rock ‘n’roll song came onto the jukebox, and Pat let out a shriek, and then yelled, “Train kept a-rollin’!” She jumped up and clapped her hands, and the black shiny purse she had on her arm hit me in the belly, but it didn’t hurt, too much.

Sam and Walt and Edgar all shouted in unison: “I will!”

I didn’t stick around. I followed my alleged friends back into the crowded tiny dance floor, and shoved my way past them and through the mass of other dancing people, getting elbowed and kicked several times, and in turn elbowing and kicking some other people, not necessarily the ones who had elbowed and kicked me. When I got to the far side of the room, where the cigarette machine was I almost bumped into the waitress, Harriet Beecher Stowe, carrying two pitchers of beer in one hand, and a tray of drinks in the other.

“Where are you rushing off too?”

“Hotshot. Always in a big hurry to get some place, aren’t you?”

“I know your kind. I’ve seen you come. And I’ve seen you go. Sure you’re young and handsome now, with your first book coming out with a fifty thousand dollar advance, but just remember, bub, your day in the sun is fleeting. Before you know it you’ll just be another tired old has-been dreaming of his glory days over a dirty glass of Carstair’s whiskey.”

“Oh,” she said. “Great. Thanks for sharing. That news really made my night.”

“Hey! Harriet!” yelled some skinny guy with a droopy moustache at the nearest booth, sitting with some other people. “Where’s our drinks? It’s like the goddam Gobi Desert over here we’re so dry!”

“Keep your goddam shirt on, Crane,” she yelled right back at him. And then to me: “Stephen Crane. He used to be a hotshot, too. Used to be.”

“You said you had to use the men’s room,” she said. “So go already. You’re hopping up and down like a three-year-old.”

I pulled on the handle and went in.

(Kindly look to the right-hand column of this page to find a listing of links to all other published chapters of Arnold Schnabel’s Railroad Train To Heaven©. Now also appearing in the Collingswood Patch™: “South Jersey’s crying voice in the wilderness.”)

I hope Porter/Arnold gets to the men's room fast. I'm so susceptible, I need to go twice in some of these posts.

I like those gladiator sandals some of the women were wearing in the video.

I hope Porter/Arnold gets to the men's room fast. I'm so susceptible, I need to go twice in some of these posts.

I like those gladiator sandals some of the women were wearing in the video.

My computer's been really buggy lately. Does stuff twice or not at all.

Better twice than not at all!