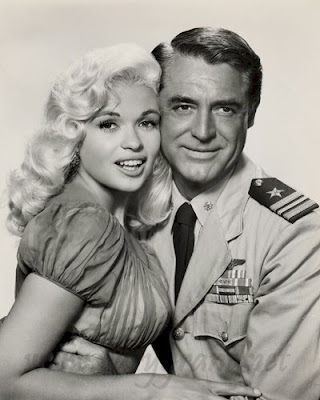 In our previous epsiodes of Larry Winchester's sprawling epic A Town Called Disdain (a Desilu Production):

September, 1969. Young Harvey, recently discharged from two years in the US Army and two weeks in the San Francisco jail, returns home to Disdain, NM; goes right from the bus to Burt’s Hideyway (the local roadhouse, where his mother Doris works as a waitress); gets in a fracas with a local bully named Bull Thorndyke; shoots Bull dead in self-defense; and then gets hired by the local rancher Big Jake Thorndyke to act as a “guide” for two mysterious but beautiful strangers named Dick and Daphne “Smith”.

In this segment Larry hands over the narrative reins to Dick:


I was in uniform that first time I became aware of Daphne, qua Daphne, at my little sister Betty’s eighteenth-birthday party. I had hardly worn a uniform in years because of my work in Q Section but that night I was sporting snappy new dress whites. I had been standing around getting quietly oiled -- and, wait, now I remember, I had eaten some of this hashish cake which I had mailed to myself from Morocco -- and anyway I couldn’t help but notice this slender tall gazelle-like creature talking to Betty. We traded glances, and a little later I was taking a piss there in the downstairs bathroom when she just walked in and closed the door.

She simply stood and watched as I finished pissing. If I hadn’t been half oiled and under the influence of this hashish stuff I might have been embarrassed but then there was something about her that precluded embarrassment if precluded is the word. I put it away, zipped my fly, washed my hands and dried them. With her just watching there.

“Yeah,” she said, taking her cigarettes out of her little white purse.

I gave her a light.

“Thanks,” she said. She exhaled, looking at me, and then she went over to the toilet bowl, lifted up her long skirt, pulled down her drawers and sat down. She smoked and peed, looking about my parents’ downstairs bathroom with all the framed New Yorker Arno covers. I just stood there. What the hell.

She rolled her eyes.

I stood and watched as she peed and smoked. I know, I was being completely perverse, but, well, she didn’t seem to want me to go. And I didn’t want to go. And after she finished and was washing her hands she looked at herself in the mirror and said, “You know, your mother and my mother are only the closest of friends. You’ve been introduced to me on several previous occasions.”

My mother had all sorts of friends. I never could keep them straight.

And then this ravishing young thing turned, wiping her hands on a towel, and looked at me.

“I was sitting with Betty three seats away from you.”

“Oh. You know I think I was a little drunk that day.” (Actually I’d been tripping on this then-newfangled LSD stuff.) “Who is your mother?” I asked.

I suddenly had a vivid recollection of a Christmas party sometime back in the 50s. I had gone into the billiard room to have a quiet game by myself and I had been lining up a shot when I sensed someone come in and then, just as I was about to shoot, a hand grabbed my ass.

Of course I blew my shot and when I turned around I saw it was this young friend of my mother’s. I wasn’t sure who she was but she was good-looking. She put her arms around my neck and she kissed me quite sensuously, giving me an erection, then she leaned back and said, “I’ve been wanting to do that all night and don’t you dare tell your mother.”

I later found out she was this journalist April MacNamara. (And, later still, that April was the wife of that mysterious guy “Mac” MacNamara.) And now -- back to the bathroom on the night of Betty’s party -- with a shock I remembered this strange little girl April had with her at that other party, then I remembered the tall shy girl with Betty that day at the Horse Show, and so finally I was able to fit this ravishing thing now standing before me into my little Weltanschauung.

I know, a little slow on the uptake.

“You were quite dashing in your uniform that day,” she said.

She reached out and touched my chest. I looked down, she lifted her finger up and flicked my nose, then she smiled and walked out.

It was very weird but her damned mother had flicked my nose exactly the same way that night in the billiard room a dozen years before.

Okay, suffice it to say I was enormously attracted, but look, she was only eighteen or maybe even younger, she was my little sister’s friend, and so, you know, just put it the hell out of your mind, pal. For the time being, anyway.

(Kindly click here to go to the next episode. For links to previous episodes of A Town Called Disdain, check the right hand column of this page. And, forestalling a torrent of e-mail: yes, you will be tested on this material, and no, a bell curve will not be used in the scoring.)