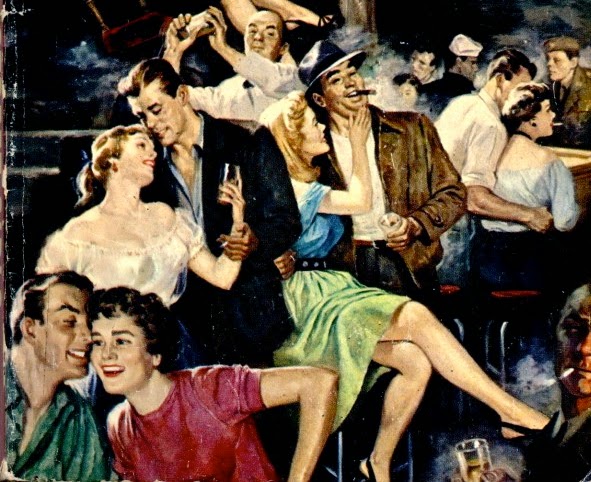 Let’s rejoin our hero Arnold Schnabel here in the dusty storage room of Philpot’s Rare Book Shop in old Greenwich Village, on a rainy and fateful night in August of 1957, where he has encountered a talking book…

(Kindly click here to read our previous chapter; those with nothing better to do may go here to return to the only dimly-remembered beginnings of this Gold View Award™-winning 76-volume autobiography.)

“Finally the summer vacation has arrived and I can pass my days as I am wont to do and as I love to do, sitting on my porch rocker in Cape May – that town so full of the immortal spirit of Arnold Schnabel – immersing myself in the subtle glories of his sprawling (but somehow not sprawling enough) chef-d'œuvre.” – Harold Bloom, in The Gentlemen’s Quarterly Literary Quarterly.


“’Not yet’?” said the voice. “That doesn’t evoke a shall we say optimistic frame of mind.”

“My frame of mind is not optimistic,” I said.

“I wouldn’t want to say always,” I said, staring at the lurid cover of Rummies of the Open Road, which depicted a pack of people drinking and laughing in some sort of barroom, with several attractive young women in attendance, showing bare legs and almost bare bosoms.

“You like what you see on the cover there?” said the voice.

“Just okay? I think I know what you’re thinking. You’re thinking, ‘Why don’t I ever wander into fun places like this in real life?’ Aren’t you?”

He or it was correct, but I didn’t want to get into it with him, or it.

I sighed, and this would make it my one thousandth and first sigh of the day. At this rate I would easily reach two thousand sighs before I got to bed, if I ever got to bed.

I suppose I started to say something, but then after all said nothing.

“What?” said the voice. “What can be so all-fired pressing, so life and death urgent that you can’t stop and talk like a civilized human being for one minute?”

“May I ask you to speak up?” said the voice. “No one likes a mumbler.”

I realized I had in fact been whispering, although the voice in the book was speaking in normal conversational tones. I suppose I was whispering so that my friends and Mr. Philpot wouldn’t hear me. But why did I care if they heard me? This was a mystery to me at that moment and remains a mystery as I write this.

“Come on,” said the voice. “Spill. Get it off your chest. Probably do you good. People keep things bottled up inside it makes them crazy, or if not crazy it can cause ulcers, or constipation, sometimes other manifestations of –”

“I have to pee,” I said quickly, speaking right into his sentence in a manner I now realize was quite rude, but then consider the circumstances.

“I said,” I whispered, holding the book closer to my mouth so that I didn’t have to speak loudly. “I have to – you know –”

“No,” said the voice, “I don’t know, or else I wouldn’t ask. What did you say? You said you have to be somewhere?”

“Where?” said the voice. “Where is it so all-fired important that you have to ‘be’ so urgently.”

“The facilities,” said the voice.

“Yes,” I hissed. I know that writers of cheap fiction often say that someone hissed something, and usually it doesn’t really seem like an accurate term, but in this case I think what I did was pretty close to a hiss, because, again, look at the circumstances.

“You’re telling me you have to go to the bathroom,” said the voice.

“Yes,” I hissed or whispered or maybe just said after all.

“Not defecate I hope.”

“Pee in other words.”

I sighed, and I won’t bother recording its numerical ranking among the day’s sighs. It wasn’t the first, and surely it was far from the last.

“It’s nothing to be ashamed of,” said the voice. “A purely natural function, at least for those possessed of a shall we say a corporeal host? A body in other words. You should be glad you have to pee. Disembodied spirits don’t pee. The dead don’t pee. Angels and devils don’t pee. The damned don’t pee, nor do those happy few who have ascended to –”

“Well, okay, there you have it,” I said, rudely interrupting again. “I have to pee, and I really have to go before I have an accident, so I’m just going to lay you back down –”

I had been starting to bend down to lay the book back on the stack of books that I had taken it from, right on top of an interesting-looking book called Return to Samarkand, also by Horace P. Sternwall, but I stopped.

“No need to be churlish about it.”

“What?” said the voice. “You never took a book to the bathroom with you before?”

“Take a shit,” said the voice.

“Why is it, I wonder,” said the voice, “that people so like to read while voiding their bowels? What’s your theory?”

“Is it that there’s something about the act of defecation that makes the mind and the soul more receptive to literature, to meditation, to deeper thought?”

“Because I’m asking you to. You seem like a nice guy. Be regular. It won’t kill you.”

“You don’t know that it won’t kill you?”

“Among other things, including everything, yes, I don’t know,” I said.

“Okay. Let me ask you a question,” said the voice. “Do you know how long I’ve been stuck in this book, buried under a stack of Tom Swift novels?”

“Me neither, actually,” said the voice. “Time means nothing when you’re trapped in the pages of a book. But it feels like a long time.”

“Join the club,” said the voice. “But I would do it for you. Complete stranger that you are. I don’t know, maybe I was just brought up that way. To help out my fellow man when I can. Especially of it’s no skin off my nose. But, hey, do what you’ve got to do –”

“You mean all right you’ll take me?”

I straightened up and was about to go out the door with the book when the voice said, “Hey, don’t forget your glass.”

“You said you were carrying a glass before.”

The jelly glass was still there, on the floor. I bent over and picked it up.

I pressed the wall button, turning off the light, and went out the doorway, leaving the door open.   Now that I was out in the shop proper again I became aware of the voices of my friends and Mr. Philpot, and realized that they had been talking all this time. They were speaking now in loud tones, laughing. I supposed the British navy rum was having its effect.

I turned to the right, and after about six or eight feet I came to another door. There was an old-looking tin sign on it, with the black letters “WC” on a yellow background. I put the book under my arm, turned the doorknob, and the door opened. I went in, found a light switch inside the door, pressed the button, and an electric light came on in a ceiling fixture. Sure enough, there was a toilet in here, with an overhead tank. There was even a washbasin and a mirror. I closed the door.

“Are we there?” said the voice.

“Okay then, put me down, put your glass down, and do what you have to do before you wet your pants.”

There was a ledge above the sink, under the mirror, and I laid the paperback and my jelly glass on it.

“I’m in a book,” said the voice. “I can’t see a thing. Now go ahead and do what you have to do and stop being so neurotic.”

By this time I really had no choice anyway, so I unzipped my jeans and took the book’s advice.


(Continued here, ever onward if not upward.)

(Please turn to the right hand column of this page to find what might well be a current listing of links to all other published chapters of Arnold Schnabel’s Railroad Train to Heaven©; now appearing simultaneously in the Collingswood Patch: “South Jersey’s last and best hope for some semblance of culture.”)

A character in Sternwell's "Rummies of the Road" will no doubt help Arnold. A book is always comforting.
I have to ask this, though: did Sternwell write a poem about a mangy dog? That's my first recollection of him. Recently, I read a Rastafarian poem by Sam Brown that begins,
"Tin can houses, old and young,
meangy dogs..."
Tenuous connection, I admit. Still, I hope this character isn't going to convert Arnold.

Hmm, did old Horace write a poem about a mangy dog? To be honest I don't remember? I certainly wouldn't put it past him!

Ask Rhoda. I might be wrong, but she'll know.

If anyone does, Rhoda will!