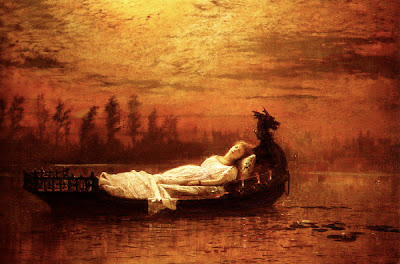 Previously in our serialization of this enexpurgated “director’s cut” of Larry Winchester’s inexplicably out-of-print masterpiece, the young and ethereal Hope was found hysterical and half-dressed on the bed of Dick and Daphne Ridpath, mysterious guests of Hope’s father, the rancher Big Jake Johnstone.

Doc Goldwasser has arrived to take a look at her.

A day in September, 1969, some several miles outside of a town called Disdain, in New Mexico, that land of enchantment...

Esmeralda went out and the Doc went over and sat down on the side of the bed.

The Doc took her wrist and looked at his watch. His watch had stopped. Oh well, her pulse felt pretty normal anyway.

“Doctor, do you believe in incubi and succubi?”

He took out his pen light.

He held her right eye open and clicked on the light. She had beautiful deep, deep brown eyes. He shone the light in and the light went in forever.

“Last night someone came to me,” she said.

He held her left eye open and shot the light into it, the light that went in and in and got lost in a place farther away than he could ever see.

She grabbed his thin right wrist in her thinner little hand and she looked into his eyes.

“Stop and listen to me.”

He clicked off the light and put it away. There was no use examining her. There was nothing wrong with her. Not with her body, anyway.

The doctor nodded and reached into his jacket pocket for his cigarettes.

The Doc shook out a cigarette, put it in his mouth, and took out his lighter.

Hope looked away, toward the window whose drawn red velvet curtains revealed the sun pitching down into the mountains and casting what looked like the reflection of the fires of hell across the sky.

The Doc lit his cigarette, clicked the lighter shut and put it back into his jacket pocket.

The Doc swallowed some smoke the wrong way and tried to cover it up with an exaggerated “smoker’s cough”.

“Gotta quit these things,” he said.

“No, it’s definitely not wrong.”

“The nuns taught me it was a mortal sin.”

“Well, the nuns are full of shit. And I hate to say it, but your father might be right about --”

“My father’s not right about anything,” she said. “He’s the most wrong person I’ve ever met. The only way he could ever be right would be by being so wrong that he would wind up right by accident.”

The Doc took a good drag of the cigarette, let it out slow, coughed lightly.

“But I was taken last night by an incubus.”

The Doc tapped his cigarette ash into the bedside ashtray that was filled with Hope’s Salems butts.

He tapped his cigarette again, even though there was no ash on it now.

“And then I remembered,” she said. “What I’d forgotten, what he made me forget.”

“The incubus. Who had sex with me last night.”

“Yes. He came through my window. And he -- but he made me forget it. Until this afternoon. And then I remembered. And that’s why I had a thing.”

The Doc ground out his cigarette.

She looked right at him with those bottomless dark eyes.

(Click here for our next enthralling chapter. Kindly turn to the right-hand side of this page for up-to-date listings of other episodes of Larry Winchester’s A Town Called Disdain, as well as to appreciations of of many of his classic films, such as Harvey Harmonica, Long Tall Shorty, Rave-Up at Roderick’s, and Desert Rat Girls, soon to be available exclusively at Kresge’s 5&10s nationwide in the DVD boxed set Larry Winchester: The European Co-Production Years, Vol. 3, from Ha! Karate/Larry Winchester Productions.)

Nothing too wrong with Hope, then.
Can't remember the last time I heard tell of an incubus, let alone the more commonly invoked succubi, those female demons sent to bedevil men.
How odd that Hell provides no same-sex tormentors?
Oh be gone, evil thoughts! But still--can it be that the Eternal Kingdom, unlike mortal earth with tiny minded occupants, sanctifies gay souls?

Hmm, sounds like a good idea for an epic novel right there, Lady Heretic.