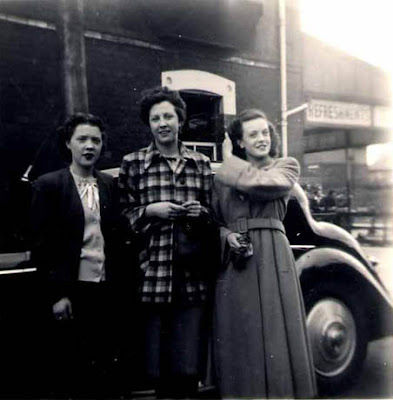 These three lovely young ladies, all graduates of Simon Gratz High School and secretaries at the Heintz steel plant at B and Nedro, were the notorious principles of a “rolling ring” in the Olney and Logan sections of Philadelphia. For four lawless years in the late 1950s to the early 60s these cold-blooded lasses would stop into the Green Parrot, the Huddle, Pat’s Tavern, and various other lively watering holes on Friday nights and relieve hard-working stiffs of the contents of their weekly pay envelopes.

A typical case might have been that of one Richard “Dick” Ward, a tool grinder at the very same Heintz factory in which the Misses Patczko, Jones and O’Doule also worked. One cold November Friday evening, Dick (a forty-year-old bachelor who lived with his mother on Leithgow Street) stopped for a few, as was his wont, at the Green Parrot Tavern on 5th Street, just across from the forbidding great oaks and monstrous thorn bushes of Fisher Park. Dick Ward was, it must be said, a committed alcoholic, although he typically did all his week’s drinking on Friday and Saturday nights. Myryka, Dolly, and Madge, sitting at a booth nursing their pitcher of Schmidt's, calmly observed the thin somber machinist getting quietly and methodically plastered on mugs of Schaefer and shots of Schenley's. Now usually the nefarious distaff trio would steer clear of their co-workers in their nocturnal depredations, but Dick was a loner who kept to himself and never left the factory floor from nine-to-five, even preferring to eat his lunch from a paper sack at his lathe, and so the girls failed to recognize him even though they’d worked at the same plant with him for several years.

Eventually the bartender struck his gong, last call was called, and the barful of happy imbibers spilled out onto the pavement, none of them more drunk than Dick Ward. Imagine the happiness of this gaunt and taciturn celibate when the three attractive young ladies approached him and asked him to walk them home across the park. Dick gallantly agreed.

The next day some local children discovered his crumpled unconscious body in a pool of still water at the foot of Fisher Park’s Dead Man’s Hill. Something had obviously gone terribly wrong.

Normally what came to be known as “the Green Parrot Mob” would simply pick the pockets of their victims, often deftly replacing the poor sap’s wallet without his having the faintest notion that he had now put in a hard week’s work for the benefit of three immoral vixens. But Dick, besides being a loner and a drunk and a committed bachelor, was also a notorious tightwad who kept his money in a small zippered purse attached by a chain to his belt. This purse in turn was kept in the front right pocket of his workman’s dungarees, a pocket secured with high-quality steel snap-buttons which Dick had stamped himself at the factory.

To cut a long story short: as Myryka was holding her breath and letting Dick buss her cheek on that sloping concrete pathway in Fisher Park, Dolly lifted the flap of Dick’s coat while Madge went to work trying to unsnap Dick’s pocket buttons. Suddenly Dick caught on and thrashed down at Madge’s arm. I suppose we’ll never know exactly what happened next. Dick later claimed that the three girls descended on him “like a pack of banshees”. The Misses Patczko, Jones, and O’Doule for their part claimed to the end that Ward had drunkenly and indecently assaulted all three of them.

After two days in a coma, Dick Ward awoke, fresh as a daisy and no worse for wear, and promptly pressed charges against Myryka, Dolly, and Madge. They may not have recognized Dick from the faceless rabble on the factory floor, but these three pulchritudinous office girls had played a major role in his fantasy life for some time, and he was able not only to pick them out of a line-up but to give their names and addresses. Meanwhile, police commissioner Rizzo had put top detective Morris “Big Mo” Berg on the case, and the fearsomely persuasive Mo soon produced witnesses from the Parrot who identified Patczko, Jones and O’Doule as the three women seen descending into the darkness of Fisher Park with the hapless Mr. Ward.

The girls pled down to a charge of “reckless endangerment” (for leaving the unconscious Ward at the soggy foot of Dead Man’s Hill on that cold night), and received sentences of two-years-to-five. Dozens of men came out of the woodwork and claimed to have been rolled by these three larcenous lovelies, but none of these charges ever resulted in indictment. The gals did their time at the Muncy state women’s prison, all three of them getting out in eighteen months for good behavior.

No one knows how many poor drunken saps they rolled during their criminally active years but we do know that within a couple of months after their parole-period ended they somehow found the money to open a diner (“The Three Babes”) near 5th and Olney, which prospered for many years.

(Kindly refer to the right hand column of this page for a complete listing of many other strange but true "Tales From the O-Zone".)
Posted by Dan Leo at 7:38:00 PM

Ah, The Three Babes diner, there's some memories...Me and my homies getting high in Fisher Park, then going over to the Fern Rock to catch "El Dorado", then into the Huddle or the Parrot to drink pitchers of Schaefer, then we'd stumble down 5th Street to the Three Babes for their homemade latkes and gravy, good times. And they were really nice ladies too.

And I'll tell ya it didn't hurt your eyes none to see that Madge behind the counter. Me and everyone of my boys had a hard-on for her. Not that she wouldn't whack ya upside the skull with her spatula if you cracked wise with her. God, good times...