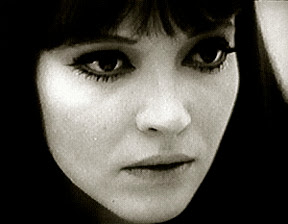 Previously in these, his never-before-published memoirs (“A bizarre amalgam of Proust, St. Augustine, and Sad Sack” -- The Allentown Post-Herald), Arnold Schnabel (“The finest poet ever to come out of Olney” -- The Philadelphia Daily News) had a cup of joe with his new friend the bohemian girl Elektra, on a blazing hot high-summer day in Cape May.

The year is 1963, Vietnam is a rumor, JFK and Jackie rule the White House, and the country is still young.

I insisted on paying the tab, despite Elektra’s protestations.

I thought of lighting a cigarette but it was too hot. Mary Star of the Sea church loomed right across the street, and I noticed one or two people going up the steps. It was Saturday, confession day.

So we walked back down Washington and then down Jackson. Outside the shop she said:

“You can stop by any time, Arnold.”

“Where do you live?” she said.

“At Perry and North. The big white house one down from the corner there.”

“Yeah,” I said. “And my three maiden aunts. And my young cousin. And a bunch of boarders who come and go.”

“It sounds bizarre,” she said.

“Maybe I’ll come by and visit you.”

Then she put her hands on my shoulder and gave me a kiss, which surprised me with its degree of concupiscence. Well, everyone always said women were a mystery, why should Elektra be any different?

And kissing her in that bright sunlight, that intense heat, both of us already moist with sweat after being outside for only three minutes, it felt almost as if we were in the intimacy of her bed together again...

But as I came up for air I noticed my aforementioned relations marching across Jackson Street on Washington, a small stolid squad of four old women and one young boy, my Aunts Elizabetta and Greta in the front rank, my mother and Aunt Edith in the middle, and young Kevin picking up the rear. Kevin was flopping along in that way young kids do, like mentally retarded people, and turning his gaze at random he saw me, and stopped, cocked his head, but then continued on.

“Okay, see ya, man,” said Elektra, and she opened the door and went into the shop.

I was possessed of a slight erection, so I walked slowly back up to Washington. Even in this almost unbearable mid-day heat there were still lots of tourists wandering to and fro. They were insane. But who was I to talk?

But somehow I could not break the habit just yet, so I turned right towards the Star of the Sea.

My mother and aunts walk so slowly, they and Kevin barely beat me into the church. I didn’t feel like dealing with them right away, so I lit a cigarette. Two or three other Catholics stood at the foot of the steps, smoking one last butt before going in to have their sins annulled.

I finished my own cigarette, tossed it into the street, and went up the steps.

The shadowed stained-glass dimness of the church was a blessing after the inferno outside. I dipped my fingertips in the cool holy water, made the sign of the cross, and then went through the foyer into the nave, its smell of wood and marble, the sparkling of gold and candles. I genuflected and went on up to Father Reilly’s confessional. I knew that my aunts and mother always went to Father Schwartz, farther down over on the other side, and I could see my mother and my Aunt Greta kneeling in a pew. No one else was in line for Father Reilly, but the red light was on, so I slipped into a pew myself and knelt down. Just then young Kevin popped out of Father Reilly’s confessional like a jack-in-the-box, saw me, and immediately squirreled his way onto the kneeler next to me.

“Was that lady your girlfriend, Cousin Arnold?”

He had his hands folded as if he were praying.

“No,” I said. “Now quit talking and say your penance.”

“Wow, you have a girlfriend. I saw you kissing her.”

“Are you gonna confess kissing her?”

“Say your penance,” I said, and pushed past him to get out of the pew.


I told Father Reilly about the incident with Elektra. His silhouette behind the screen perked up a bit. I’m sure he recognized my voice by now, and this was the first time I had confessed anything more grave than daily self-abuse.

Because he was a priest after all I ran the whole Jesus thing by him, about Jesus encouraging me. And then, I don’t know, maybe I was crazy from the heat, maybe it was the marijuana I had smoked (or of course, maybe I was just crazy), I started rambling on about whether fornication should or should not be a mortal sin. I think he lost patience with me after a while, because he rather abruptly absolved me and sent me packing with only three Hail Marys, which by the way is the exact same sentence he always gave me for my usual confession to seven or eight or more of the sins of Onan. {See Arnold’s poem “Dialogue in the Confessional”, in the Appendix. — Editor.}

I left the confessional, knelt down in a pew and said my penance. Then I looked up. Kevin, my aunts and mother had all left the church. A few other penitents knelt scattered along the aisle seats of the pews.

Well, at least I was free of sin now, according to the Catholic church.

For the time being.

(Click here to go to our next adventure. Go to the right hand side of this page to find links to other episodes of Railroad Train to Heaven -- now in development for a major mini-series on Masterpiece Theatre -- and to many of Arnold Schnabel’s immortal poems, available free of charge to senior citizens, students, and serving and former members of the armed services.)
Posted by Dan Leo at 3:20:00 AM

"Well, at least I was free of sin now, according to the Catholic church, anyway. So I had that going for me."

That sounds like it should be a line in Arnold's personal ad.

Why do I picture the mother and aunts in the style of dress from 10-20 years earlier... those support stockings that no one can see through, those sturdy oxfords with a slight heel to make them feminine... and of course the dress that has the belt holding the bosom from going any lower.

The story gets better and funnier every time. I love Arnold. If Elektra had any sense, she'd lose her beatnik ideals and go for him. Someone needs to show her that time is relative and too often and not often enough equal the same thing. If someone's anxious about everything, it center loses hold and before long he or she's anxious about nothing.
That enormous heat.
So true.

Hey Kathleen, Its a space time continuum thing, I don't think you get it.

Comin' up, Fast Eddy! We've had a slight head cold here at Leo Central, but Larry tells me he plans on putting the finishing touches on the next episode of "Disdain" tonight. He called me from the bar at Musso & Frank's on Hollywood Boulevard ("Schmoozing some Japanese investors") though, so let's hope for the best.

Kathleen, I'm sure that Arnold's spirit is smiling, knowing that his memoirs have brought you enjoyment.

Y'know, Jennifer, that's just how I picture those ladies. Back in the old days, the hood I grew up in, which coincidentally is the hood Arnold comes from (Olney), must have had the highest percentage of foreign-born old ladies of any neighborhood in the country. Even the old women who were native-born seemed foreign somehow.