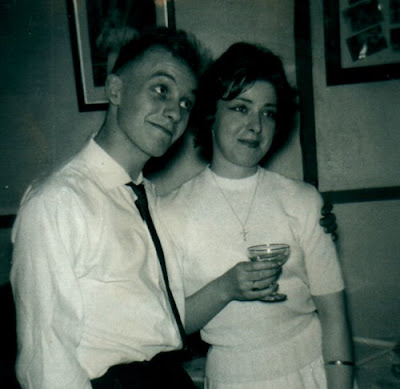 Gerald and Patricia (“Paddy”) Moyle, who recorded under the name “The Moyle Siblings” appeared regularly in the mid-60s at Philadelphia venues like the Commodore Barry Club and the Catholic War Vets’ on Chew Avenue, performing mostly old Irish favorites, but on the side they put out an incredible series of self-penned 45s that were among the best of that era’s folk-rock/psychedelic genre.

Their one undeniable masterpiece is “Electro-Go-Round”, released on the Lawn label in 1965, three-and-a-half minutes of dreamlike bliss that was also their only side to chart on the national Top 100, climbing as high as 79.

Electro-go-round, round and round my mind...

With this song the Moyles paved the way for future bands like the Cocteau Twins, Mazzy Star, and Air.

The Moyle Siblings never got a major label record deal. Paddy got married, raised four children, and for years worked at the Olney Branch of the Free Library; Gerald became a guitar teacher and session musician. They continue to perform their Irish repertoire at local clubs and parties.

I know for a fact that Paddy has all the original masters of their singles in a trunk in her house on Fairhill Strteet, along with tapes of a lot of great stuff that was never released.