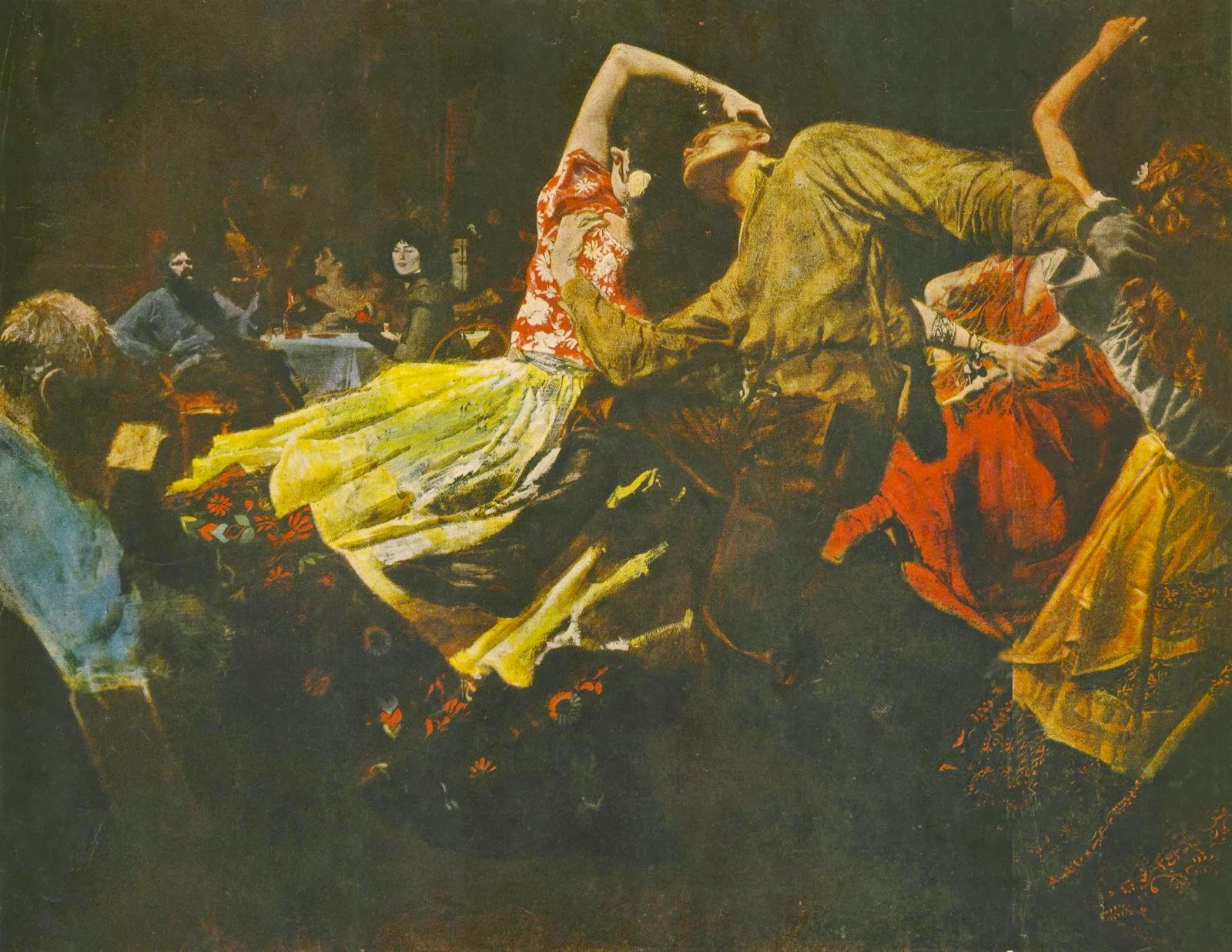 Let’s rejoin our hero Arnold Schnabel here in Greenwich Village’s bohemian hotspot the Kettle of Fish, on a very long rainy night in August of 1957…

“Yes, I have caught a late-winter head cold, but to me this is no more than a welcome excuse to stay home, stoke up on my wife’s delightful pot cookies, drink copious cups of strong Assam tea, and lose myself in the wondrous universe of Arnold Schnabel’s sprawling and inexhaustibly rich chef-d'œuvre.” – Harold Bloom, in the AARP Literary Quarterly.


“Hold on, pal,” the little man said, and he pointed a finger up at me, with a hand that held a bottle of Rheingold beer. His other hand held a cigarette.

“Don’t be so impatient. How do you even know what I’m going to say.”

“Allow me to introduce myself. My name is –”

He made some sounds with his mouth and tongue and an exhalation of beery breath, but these aural phenomena passed through my brain without leaving the slightest impression on my consciousness.

I took a step to the left, preparatory to attempting to limp briskly past him, but he took a sideways step with me, blocking my way.

“You’ve heard of me, right?” he yelled, squeaked, through the continuing cacophony of the barroom.

“Just hold on, buddy.” His voice sounded like it was coming from a scratchy old record playing on an old Victrola. “What’s the big rush, anyway?”

“Trying to rejoin my friends?” I said. “Return to my own world?”

“All that shit can wait. Look, you’ve read my book, right?”

“And what did you think of it?”

“You’re not shitting me?”

“You probably wonder though why I never published another book, all these thirty-two long years.”

“Well, yes, I had wondered about that,” I lied, through my teeth, but then I guess the bock really began to hit me, because I felt compelled to tell the truth. “Wait,” I said. “I was lying. I don’t know who you are, or what your name is, and I doubt very much if I’ve read your book.”

“It went in one ear and out the other,” I said.

“I wrote a book of poems titled Dithyrambs for the Damned.”

“You never heard of it.”

“No,” I said, the single syllable echoing through the vast empty dark reaches of the universe.

“I can’t believe you’ve never heard of my fucking book.”

“Ezra Pound gave the book a good review. So did Gertrude Stein.”

“What. Just because Pound and Stein gave it good reviews?”

“Well, to be honest I don’t know who those people are.”

“You don’t know who Ezra Pound and Gertrude Stein are?”

“Not inexactly either,” I said.

“Then why’d you say you’re sure my book is good?”

“I was trying to bring the conversation to a close, as painlessly as possible.”

“Not at all,” I said. “I think that if you will mentally review everything I have said since you waylaid me, that I have said no such thing.”

“But you think my book stinks. You may not be saying it per se, but that’s what you’re thinking.”

“All I’m thinking is that I want to escape.”

“But if you were to think of my book then you would think that it stinks.”

“Not necessarily,” I hedged.

“Okay,” I said. “To be honest, and apparently I must be honest, I have no idea if your book is good or not. Nor, continuing with this odd streak of honesty, do I care. Now, may I pass, please, Mr. Scarasomething?”

He paused, but he still stood in my way.

“You want to know what I think?” he hollered, as if he were down in some hidden valley and calling up to a friend way up on a mountainside. “Wanta know?”

“No,” I hollered back down to him.

“I heard your so-called poetry-reading here earlier tonight, and I think your poetry stinks.”

“You use too many words too infelicitously to say Johnny-fuck-all.”

“Well, I can see how you might think that,” I said.

“I most certainly do think that. Your so-called poetry is so much pretentious self-indulgent shit.”

“I said I agree that my poetry stinks.”

“But it’s your own poetry.”

“But still it stinks,” I said.

“Oh, I’m sure you will,” I said, with difficulty, squeezing out just one more lie.

“Do you really think so?”

“Well, no, not really,” I said. “Listen, I’d like to tell you something more encouraging, but I just drank a mug of bock laced with ambrosia, and I think it’s forcing me to tell the truth.”

“Why won’t they sell me the house bock?”

“Well, if you must know,” I said, “it’s probably because you’re kind of obnoxious.”

“I thought that was why,” he said.

“Maybe you could try to be less obnoxious.”

“If I could write some good poems again they wouldn’t care if I was obnoxious.”

“Well, that’s possibly true,” I said. “But still, maybe if you could just try to be a little less unpleasant –”

“It’s just ‘cause I’m so embittered. Because I’ve had writer’s block for thirty-two years. What’s your secret?”

“I mean for writing. How do you write?”

“Oh, I just sit down and start writing,” I said. “Something always seems to come out.”

“That doesn’t make me feel any better,” he said.

“Not even a Rheingold? They only cost a quarter, you cheap bastard.”

“It’s not the price of the beer I find daunting,” I said, “but, rather, the prospect of remaining in your company.”

“So you find my company that distasteful.”

“Well – and, again, I only say this because apparently I am at present unable to tell a lie – I suspect that you are a mooch, as well as being an obnoxious bore. Also, if you don’t mind my saying so, your breath is bad.”

I couldn’t help it, it was the bock, forcing me to tell the truth.

The little man cursed me to hell, then turned away, towards the bar.

I continued on my limping hobbling way.

What was it with me and obnoxious old men? Why were they drawn to me? Or, in some terrible way, was it I who was somehow drawn to them?

I filed these questions away for musing upon at some future date, preferably a date so far in the future that I would never reach it.


(Continued here, because the gods have so ordained.)

(Kindly look to the right hand column of this page to find a quite often current listing of all other published chapters of Arnold Schnabel’s Railroad Train to Heaven©, sponsored in part by Uneeda© Biscuits: “When I was just starting out in the writing game there were plenty of days when Uneeda© Biscuits were the only thing keeping me alive until that next publisher’s check came in!” – Horace P. Sternwall, author of A Gentleman Always Wears Spats and Other Stories.)

I wouldn't have guessed Porter/Arnold could be more honest. That ambrosia expands definition, among other things.

Let's see how much trouble compulsory honesty gets our hero into!