“A Town Called Disdain”, Episode Forty-Five: Dick knows it's foolish even to try to lie to Daphne 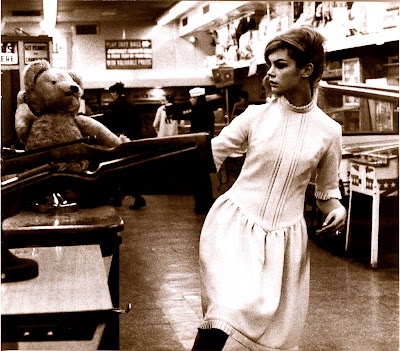 Return with us now to the book Harold Bloom called “not just the great American novel, but one of the greatest of all novels, able to stand on equal footing with such masterpieces of world literature as Natascha: Lass of the Steppes, Dr. Xing’s Stepdaughter, and The Seven Lives of Señor Doyle” as Larry Winchester reveals yet another dimension of that glamorous and mysterious couple, Dick and Daphne Ridpath.

We are of course in the month of September, 1969, on a ranch on the border of the vast and wasted New Mexico desert, just several miles outside of a town called Disdain...

They lay side by side on their backs across the bed, their legs dangling off the side. Daphne’s hand lay on Dick’s damp upper thigh. Dick lay with his hands folded on his stomach and he and Daphne both stared up at the grim old floral-papered ceiling.

A cooling dying-day breeze smelling of rock and salt blew in through open the window.

“I want to know who you were thinking about.”

And she pulled at a clump of his chest hair.

“Well, who were you thinking about?” asked Dick.

His head jerked down to look into her eyes.

“I wasn’t fantasizing about him. I was just remembering. You were the one fantasizing.”

It was never any use arguing with Daphne. She read him like an open comic book.

“It was that Hope girl,” said Daphne, with complete certainty. “Wasn’t it?”

“Of course not,” said Dick, although of course it had been, but the funny thing was that with him also it had been not so much like fantasizing but remembering. But how could he remember something that had never happened?

“You’re such fantastic liar,” she said, and squeezing him hard down below, she stuck out her tongue and licked his left nipple slowly like some beautiful sated leopardess.


Dick lay quiet, feeling Daphne’s sweaty breast on his sweaty chest, her warm breath in the hairs on his chest, her smell of sex and Chanel No.5, the smell of her hair, her hand on him.

He felt really odd, emptied of everything but a thin ghostly oddness.

Not that he’d felt much of anything else but odd for some years now. But there were degrees.

He tried to remember the details of what he had been fantasizing that he’d been remembering, but all he could recall now was that it was indeed this Hope girl, and that some people or some creatures had been watching them.

Get a grip on yourself, boy. Just get a grip here.

He put his lips to the top of her head and he kept them there, in her damp soft short hair, the smell of the Palm Grove hotel shampoo and of sweat, the damp cork smell of that pith helmet of hers, this strange head.

After a few moments she lifted her face up and looked into his eyes.

Then they joined into each other through their eyes, and for a moment they were beyond time and beyond flesh and words.

Their eyes closed together and they fell asleep.

(Click here for our next exciting chapter. Kindly take a look at the right hand side of this page for an up-to-date listing of links to other episodes of Larry Winchester’s a Town Called Disdain ™, now in development by Ha! Karate Films as a major motion picture starring Billy Zane, Kari Wührer and Stephen Dorff, to be directed of course by Larry Winchester, provided the funding doesn’t fall through again.)

Made for each other.