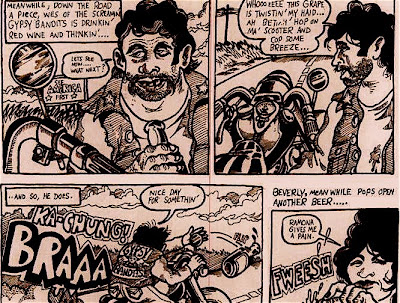 Larry Winchester now shifts his cinemascopic gaze to the young recently-returned soldier Harvey in this, our Costco Award shortlisted serialization of the “director’s cut” of the novel Harold Bloom called “an epic on the order of Moby-Dick, except not nearly as boring”.

The place: the Johnstone Ranch, just a couple of hoots and a holler outside of a town called Disdain...

Harvey wandered off a ways to take a leak behind a scrub oak that stood alone like sentry in front of the grey prairie stretching out to the lumpy foothills and the black mountains behind them.


He had been very stoned by the time they got back to the ranch that afternoon, and after leaving the stable he had to lie down in his bungalow for a while. He dozed, and in his dreams he flew over the desert, not exactly flying but leaping effortlessly, and each leap vaulted him miles and miles over the desert. He only had to touch down and make another easy bound and he would go sailing up again over the desert and over the hills and the mesas, and then he sailed out toward the little atomic town.

In the atomic town he landed in the town square, and Mrs. Smith or Ridpath walked up to him holding a martini and a cigarette, and then she was Hope, and then Hope became Attie Parsons.

And then he and Attie were in bed with Miss Enid in one of the split-level houses in the atomic town and Cleb sat there on a big chair watching them and then Mr. Smith or Ridpath came into the room and said something to Harvey except it sounded like he was underwater, and then the house began to rise up in the air above the desert and into the sky. Then he woke up.


Harvey didn’t feel like going back to the party yet so he lit up a smoke and sat down with his back against the scaly bark of the oak and looked in at all the people and the glowing fire-pit with the ragged remains of the side of beef skewered across it. A cool breeze rolled in waves down from the mountains in back of him and when a gust hit the fire-pit a sprinkling of red sparks swirled up and then disappeared.

It felt good just to look at all the people for a while but not be with them. He’d gotten a little bored sitting with the rest of the hands, but he’d figured it wasn’t really his place to go sit where he’d rather sit, with Mr. and Mrs. Ridpath or Smith and Miss Enid and that English fella and Hope and Doc Goldwasser.


Tip came moseying over. He rolled a joint while he moseyed, and by the time he got to Harvey it was rolled up tight and licked. He hunkered down, lit it up with his Zippo and passed it to Harvey.

Harvey stubbed out his ciagrette in the dirt, took a couple of hits from the joint and then passed it back.

Tip sucked deep twice, exhaled, and then said, “Your rich folks want you.”

Tip grabbed another good hit and passed the joint to Harvey.

“Yeah,” he said, holding in the smoke.

Harvey took another hit, and holding in the smoke himself he said, “They ain’t really rich.”

Tip exhaled and reached for the joint.

“Nah,” Harvey said, letting out his own cloud of smoke. “The dude told me they’re broke.”

“Beats me,” said Harvey. There was no point in going into all the weird shit Mr. Ridpath had talked to him about. No point at all. “I don’t think they know either,” he said.

“By the way, did ya really bang that lady Mrs. Smith?”

“The whole town’s sayin’ you was bangin’ her in that T-Bird when them Motorpsychos came up on y’all.”

“These people are pathetic, man. This whole town’s pathetic. That’s why I’m leavin’.”

“Here, boy.” Tip handed Harvey the joint. “Take a good one now and get on back to your lady friend.”

Harvey took his hit, and they stood up.

The world rocked back and forth, like a great ship on an even greater swell. And then it settled down.

“Righteous shit,” said Tip. “Get it from them Motorpsycho dudes.”

They started slowly back.

“Well, ya smoked it last night, and it didn’t feel like bad karma then, did it?”

But now it sure did.

(Turn here for our next exciting chapter. And please feel free to check out the right hand side of this page for up-to-date listings of links to other episodes of Larry Winchester’s A Town Called Disdain™, a Sheldon Leonard production.)

I have an awful feeling the Checkered Demon's gonna show up.