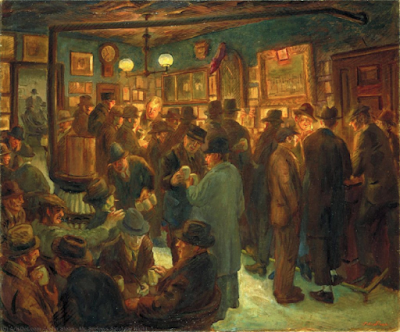 “It ain’t like the old days,” bellowed Frankie Titana. Actually everything he said was bellowed. Bellowing was Frankie’s normal tone of voice. “Nobody’s got no respect no more. Goddam beatniks. Goddam jitterbuggers. When I was a kid people respected their goddam parents. The coloreds knew their place. You know who I blame? I blame Roosevelt. Goddam Communists.”

“Hey,” said Bob, and he rapped his U.S. Marine Corps ring on the bar top, which meant only  one thing. “What’d I tell you?”

“What?” said Frankie. “I can’t express an opinion? What is this, Russia?”

“How about just one more bock, Bob? I’ll be quiet.”

“I”ll be like a mouse. Just one more, and get yourself one, too.”

“I’m not going to tell you again, Frankie.”

Bob didn’t say anything, just gave him that look of his.

Frankie got up off his barstool, gathered up his change and put it in his pocket.   He hesitated.

“I ain’t permanently flagged, am I?”

Bob took a few seconds before answering. How many second chances had he given this jerk? Life was too short.

“I don’t want to see you in here again,” said Bob.

He turned to the right, and to the left, at all the other regulars, but nobody spoke up for him.

He staggered out into the bright dirty hot Bowery sunshine. He went up the block to Moe’s liquor store and got a half gallon of tokay, then he walked over to where two bums were sitting on some crates in the alleyway in between the Sunshine Hotel and Schwartz’s grocery store.

“You guys mind if I join you?” said Frankie, and he held up the tokay in its paper sack.

“Sure, pardner,” said the one bum, and he patted the up-ended Andy Boy crate next to him.

Frankie sat down and screwed off the cap of the tokay.