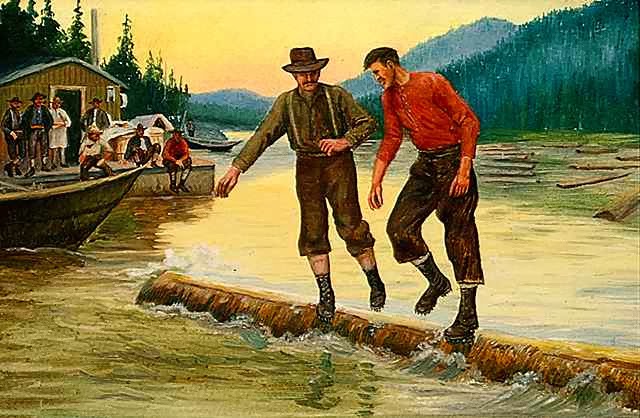 We left our memoirist Arnold Schnabel (currently trapped in the fictional persona of “Porter Walker, bohemian poet”) here in the Kettle of Fish, on Greenwich Village’s MacDougal Street, on a long hot night in August of 1957…

“One hears phrases like ‘inspired lunacy’ applied to Arnold Schnabel’s sprawling and majestic chef-d'œuvre: I accept the adjective, but I object most strenuously to the noun.” – Harold Bloom, in the Boys’ Life Literary Supplement.


I suppose I looked downcast.

I suppose I might have heaved a great sigh.

Perhaps my demeanor betrayed a hint of despair.

All I know is that this Norman Mailer fellow put his cigarette  in his mouth, thus freeing up his right hand which he then put on my shoulder.

“Yes, of course, I know,” I said, although of course I knew no such thing.

Fortunately he took his hand off my shoulder. I told myself to be happy for this at least, although now, standing here, after just recently running across the rainy street on two bad legs, I became aware once again of my various physical pains, never mind whatever sort of mental or spiritual distress I may have been undergoing, and I think I flinched, or grimaced, or both.

“You look,” said Norman Mailer, “– and please forgive my presumption in saying so – but you look as if you have just been vouchsafed a glimpse of that dark well of nothingness into which we all must someday descend.”

“Then what the hell is it?”

“My legs hurt,” I said. “I had several accidents tonight, and I bruised my head and arms as well.”

“You do look, dare I say, somewhat soiled and wet and scruffy. I didn’t want to mention it, thinking perhaps this was due only to bohemianism, and not misadventure.”

“Well, look,” I said, “I really better try to find that pen or pencil.”

“You and that crazy pen or pencil.”

“Okay, buddy, we’ll get you a pen or a pencil. Any preference?”

“I suppose a ballpoint pen,” I said.

“But you’ll take a pencil.”

“I’ll take a child’s crayon at this point,” I said.

“Raring to strike while the flame of inspiration is firing your soul.”

This time I’m pretty sure I sighed.

“Oh, it’s nothing too personal, don’t worry,” he said. “I just wanted to ask you about something you said.”

“No need to get preëmptively defensive,” he said. “But it’s just that you said you thought you saw me on TV.”

“Right,” I said. “I think you were being interviewed with this little guy, Truman something?”

Suddenly I remembered that the show I’d seen him on was from a later date, maybe 1959, in other words it was still in the future. If I wasn’t careful I would have some explaining to do, and I was so tired of explaining.

“I must have been mistaken then,” I said. “It must not have been you but someone else.”

“Listen,” I said, “I made a mistake. I don’t even know who this Jimmy Jones is.”

“He’s not so bad. Wrote one book that was not entirely without merit.”

“But may I ask you what you think of my books?”

“I’m sorry, Norman,” I said. “As far as I know I haven’t read your books. All I read are the kind of cheap paperbacks you find on those revolving racks in drug stores.”

“Sometimes,” I said, already bored with the subject.

“Tales of high adventure, of pirates on the high seas?”

“Occasionally,” I said, “but mostly just, you know, books about ordinary guys who get trapped in a vortex of passion and violence”

“But I write about that kind of stuff,” he said. “I mean sort of. You sure you didn’t read my novel The Naked and the Dead?”

I almost mentioned that I had however seen the movie of that name, with Aldo Ray, but I held my tongue, not being sure if the movie had been made yet.

“You never read my Deer Park, or maybe Barbary Shore?”

“Was Barbary Shore about pirates?”

“Sorry, I never read it then.”

“You make me realize how profoundly insignificant a not untalented but somewhat successful and, yes, very ambitious writer may in point of fact be.”

“We are all significant in God’s eyes,” I said.

“You don’t really believe that, do you?”

“Okay,” he said, bellowed. “We got that all straightened out. Now let’s get our drink on.”

“I would like if I may to buy you two fellows a drink,” said Norman.

“Follow me, guys,” said Norman and he turned and strode toward the bar, and Ben followed him. I followed them both, limping slowly and gingerly.

“Who’s your new friend?” said Ferdinand, who had flown into my ear again.

“A ham-and-egger,” said Ferdinand. “Only my opinion, you understand. But, hey, if he’s buying who cares how crappy his books are, right?”

I didn’t say anything, but continued on toward the bar, where Ben and Norman were now standing, Ben towering over Norman, and Norman holding his right arm out, trying to get the bartender’s attention.

Okay, one drink, I thought. There didn’t seem to be any way to avoid that, and besides, I’ll be honest here, I wanted a drink. So I would get a beer, and then I would see about borrowing or buying a writing implement from someone.

“Fuck I am. You’re that Porter Walker, the hot new poet around town.”

“I caught your act earlier tonight. Not bad. Not bad at all.”

“You thought. What, all old poets look the same to you, do they?”

“Robert Frost is my name. You have heard of me I presume.”

“Yes, sir,” I said.   He still held onto my arm, the thin fingers digging into my biceps.

“You may call me Bobby. And I shall call you Porter.”

“What is your all-fired hurry, boy?”

He tightened his grip on my arm.

“Your friends, your friends – don’t give me that crap. You know how many rising young poets would kill for an audience with me?”

I wondered where Ferdinand had got to, but then I knew. He wouldn’t wait around listening to this rude old man when there were drinks being poured over at the bar.

“Why are you looking at the bar?” said Robert Frost. “Don’t look away when I’m talking to you. Show some respect.”

“I heard you got a twenty grand advance from Smythe & Son for this new epic poem you got coming out.”

“I don’t get a twenty grand advance for a new book. Why should you?”

“Don’t lie to me, punk. I may be old but I can still throw a mean left hook to the gut when you’re not looking.”

At last he let go of my arm, so that he could mime throwing a left hook into my gut.

“But I assure you I didn’t get twenty thousand for my book,” I said.

“What are you gonna spend it on? Whores? Booze? Opium?”

“Here’s the deal, kid.” He pointed his finger at me. “I’ll write a blurb for your book, and a good one. Like, ‘The most exciting new voice in poetry since Eddie Guest!’ How would you like that? A line like that on the cover of your book, with my name under it in bold print, I guarantee you that’ll move at least fifty thousand units right there.”

“Well, okay,” I said. “I guess you’ll have to talk to my publisher, Julian Smythe?”

“He’s another punk, a dandy, a playboy fop, and his old man is a bastard. But you have them get in touch with me.”

“I didn’t say I wanted to read your book. I said I would write a blurb for it. Don’t presume. That’s the trouble with you young johnnies, you presume.”

“And here’s your part of the deal. In return I want you to write a blurb for my next collection.”

“Oh, Jesus Christ, what, and you’re supposed to be a poet?”

“You probably are. Lookit, Porter, when the time comes, I’ll write the fucking blurb. All you got to do is let us use your name. You think you can handle that?”

“Good. Now shake hands on it.”

I took his ancient dry old hand. I had an awful urge to squeeze it as hard as I could, to crush it into a crumbly powder, but I refrained.

(Continued here, and for no one really knows how long, as yet another cache of Arnold Schnabel’s copybooks has only recently been discovered under a pile of Reader’s Digests in a dresser drawer in the guest house formerly owned by his aunts in Cape May, New Jersey..)

(Kindly turn to the right hand column of this page to find a possibly current listing of all other officially-released chapters of Arnold Schnabel’s Railroad Train to Heaven©, now available for a modest fee on your new Kindle™; also published in the Collingswood Patch™: “South Jersey’s voice of freedom.”)

A typo demon took the last comment. Anyway, I was surprised that Robert Frost would behave so rudely to Porter/Walter, despite his reputation for trespassing on snowy woods.