“A Town Called Disdain”, Episode Forty-Nine: it seemed kind of like a cool idea at the time 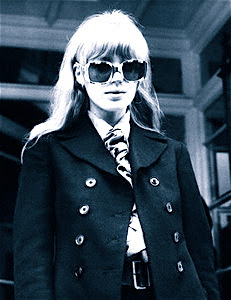 Our CVS Literary Award-shortlisted serialization of Larry Winchester’s sprawling epic continues, on a fateful evening in early September, 1969, at the Johnstone Ranch, some several miles outside of a town called Disdain. (Go here for our previous episode.)

Today’s chapter features not only the audience favorite Daphne Ridpath (currently guest-appearing in our other serial Railroad Train to Heaven), but the return of Enid, the attractive sculptress and proprietress of Enid’s Café...


All heads turned as one and all conversation ceased as Daphne came out onto the back porch wearing her purple velvet St. Laurent three-piece trousersuit with a ruffled rose dandy shirt and floppy black satin bow tie. On her head was that funny oversize newsboy’s cap from Mary Quant in black PVC. It had a little battery inserted in the bill and when you flicked a switch little lights all over the cap would start blinking on and off in various colors. She left the lights off for the time being.

Even the drunken musicians were affected by her entrance: they fell choppily out of the song they’d been playing (“Guantanamera”) and then segued reverently into the “Theme From a Fistful of Dollars”, the trumpeter blowing his horn directly at Daphne.

She stood there surveying the scene and basking in the admiration flowing warmly up from the people below.

On examining herself in the mirror in their room she had noticed a thick stain of probably human provenance on the jacket’s right lapel, but as she had already spent over an hour getting ready she decided to accept this minor flaw.

She had read once where the weavers of Persian rugs always deliberately put in one flaw so as not to impinge upon Allah’s monopoly on perfection. Personally Daphne did not find Allah’s works anywhere near perfection, and although in her personal appearance perfection was her goal she believed that after a while, after an hour or so of dressing and make-up and hair (maybe two, tops) you just had to say the hell with it and stride on heedlessly.

Dick appeared to be behaving himself, sitting at a picnic bench and eating while talking to that crusty but somehow lovable doctor.

And there was that little Hope person sitting next to Dick, sipping Dr Pepper out of a bottle with a straw, and smiling with only one side of her mouth. Daphne was wondering if she’d better go and sit herself between those two when an old truck pulled up near the yard and a woman got out of it.

A tall good-looking woman with curly hair pulled back in a loose ponytail, wearing jeans and a rawhide jacket, a shiny silvery shirt and a red silk scarf and red cowboy boots.

The woman in her turn surveyed the scene, and then her eyes met Daphne’s. The woman stared across the yard at her for a long moment and then walked over to the porch.

The woman stood there on the ground and looked at Daphne with a half smile.

Daphne came down the steps. She liked this woman already.

“Where the hell do I know you from?” asked Daphne.

“A couple of years back in New York. We met at Max’s Kansas City. The Velvet Underground were playing. We went to a party at Andy Warhol’s and I slept in the same bed with you and your husband at the Royalton.”

“I remember now.” And Daphne did, sort of. It had been one of those nights. She was more than a little vague on this sleeping-in-the-same-bed business, though. “How are you?”

Daphne gave her an affectionate kiss on the cheek. Or rather she touched her cheek to hers while kissing the air so as not to smudge her lipstick.

“I’ve got to tell you flat out though,” said Daphne, “I’m drawing a blank on your name.”

“Right. You’re obviously far less self-centered than I am.”

“You look so pretty,” said Enid.

“Thank you. Thought I’d dress up a bit. Think I’m a bit overdressed now that I look around.”

“Not at all. You look beautiful. I know you barely remember me but I’ve thought about that night in New York. It was one of the best times I’ve ever had. I regretted we didn’t at least exchange phone numbers.”

“Well, Dick and I don’t really have phone numbers for very long. But I’m so glad we met again. Do you live around here?”

“Yes. I told you all about it that night you know.”

“I have a mind like an absolute sieve, darling. So please don’t hold it against me. Are you hungry? Let’s get some food.”

Daphne took Enid’s arm and they started toward the barbecue pit.

“So you’re staying here, at the ranch?” asked Enid.

“I know, can you believe it? What are you doing here? You’re not friends with this Big Jake personage I hope.”

“God no. But I am friends with that skinny little Englishman staring at the band over there.”

“He wishes. His name’s Derek Squitters. I had a brief affair with him about a year ago and now he’s shown up and I have to take him to an Indian peyote ceremony.”

“Well,” said Enid, “Daphne, the Indians are a little -- you know -- territorial about these things. It’s only because I’m friends with the local brujo that Squitters is being allowed -- that and the fact that Derek’s paying the man five hundred
dollars --”

“Oh, please, just let me come and if he doesn’t let me stay I’ll just come back to the ranch.”

Enid knew she should have said no, but she was so charmed herself by Daphne that she really wanted her to come. To tell the truth she wasn’t really looking forward to an evening of doing peyote with Squitters. It would be fun to have Daphne with her.

“Is Paco the brujo?”

“My cap does this,” said Daphne, and she switched on the little blinking lights.

“I think we’d better do without the little lights,” said Enid.

“Okay.” Daphne switched them off. “But otherwise I’m okay.”

(Go here for our next thrilling chapter. And kindly turn to the right hand side of this page to find a listing of links to other episodes of Larry Winchester’s A Town Called Disdain ™, a Sheldon Leonard/Dick Powell Production for Batjac Films.)

And now a word from Signor Ennio Morricone:

Daphne and Enid: Could be the start of a beautiful friendship.

And for them that want both barrels of meladramatica:

Kathleen: Yeah, it should be a great friendship -- if they can make it through this night.

stclair; They don't make 'em like that any more.