"Why can't a white boy play the blues?" 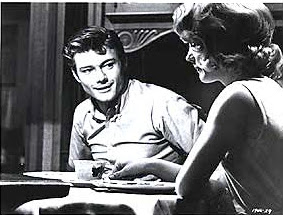 That was the musical question asked by the young Michael Parks in this groundbreaking "bluesical", shot on location in "The Windy City":

Still blacklisted ("Not for being a Commie, just for being an asshole," as he wrote in his memoirs) from working in Hollywood, Larry Winchester sneaked back into the country to film this legendary story of a white college boy from the 'burbs, Harvey Klein (Michael Parks), who longs to play hot Chicago blues. Howlin' Wolf, in his only dramatic role, plays the college handyman who hears Parks blowing his harp in the student union stairwell and invites him to come down to the South Side and jam with his band at the Killing Floor Club. But the club's mob-connected proprietor Archie Fine (Ray Danton) is not too happy about Harvey's budding romance with his sultry kid sister Midge (Ann-Margret), especially after Harvey declares himself to be "black on the inside". Featuring brilliant musical performances by Wolf, Wells, and Guy, as well as Muddy Waters, Magic Sam, and Otis Spann.

(Turn to the right hand side of this page for a listing of many other fine films from Larry Winchester. Be sure also to check out our serialization of the "director's cut" of Larry's long-out-of-print classic sprawling novel, A Town Called Disdain, third-place winner of the Pep Boys Award for Literary Excellence in Epic Literature.)

Ladies and gentlemen, we give you Mr. Howlin' Wolf:

This movie changed my life. It was at the Fern Rock Theatre, the second feature on a Saturday matinée double bill with "Mothra vs. Godzilla", and of course I was there for Godzilla. But then after the cartoons "Harmonica Harvey" came on: I'll never forget, a tracking shot down a wet city street as the sound of a blues harmonica slowly increased in volume. The camera rolled seamlessly through the doors of a smoky tavern and the music got louder and then you heard that voice: "The Wolf", singing "Who's Been Talkin'". Fuckin' brilliant. I stayed in the theatre all day and watched that movie two more times. Came back the next day and did it again.