"What the Cat Dragged In" 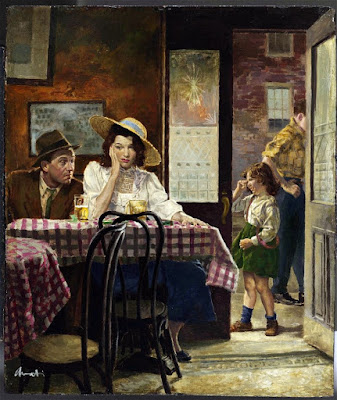 One minute Marie was stumbling out of Bob’s Bowery Bar with her husband Jerry after celebrating her birthday with the two-for-one hot dogs special and lashings of Tokay wine for Marie and bock beer for Jerry, and then the lights went out and when they came on again she was standing at the bottom of the hill looking up at God’s big house at the top of the hill.

“Great,” she said to herself.

Well, it had to happen sooner or later, so there was nothing to do but walk up that hill and face the music. It took her about five minutes to work her way up that winding stone path, so she had a little time to gather her thoughts and prepare her defense. This wasn’t the first time she’d been hauled up, although it looked like it was about to be the last time.

There was St. Peter himself on the porch, wearing a colorless old canvas jacket and dozing in an armchair in front of a little table with a big leather book like a ledger on it.

He looked at her, and then opened up his big book.

St. Peter turned the pages, looking through his bifocals, running his finger along the entries.

Apparently he found the entry.

“Do you get in? Mrs. McCarthy, you paid a man to kill your husband.”

“Him,” said Marie. “Whatever his name is. I got my load on with Tokay, I start talking to this little guy, he tells me he’s a professional international assassin. So for a joke I ask him how much to bump off my husband, and the twerp says fifty bucks, and then I jew him down to a double sawbuck.”

“You do realize I’m Jewish, do you not?”

“Oh, sorry, man, I meant to say I negotiated him down to a double sawbuck, no offense.”

“So you hired a stranger to murder your husband for twenty dollars.”

“I promised him another thirty when I got my insurance payment, so that would have brought it up to fifty.”

“You hired a man to kill your husband for fifty dollars.”

“It was a joke, man, and it was the Tokay talking.”

“Maybe to you it was a joke, but not to this Billy Baskins. He killed your husband with a brick to the head.”

“He did? How come I’m only hearing about it now?”

“Because about thirty seconds prior to bashing your husband’s head in he bashed you on the skull with the same brick, and you’ve been in a coma until you passed away a few minutes ago.”

“Wait. What the hell did this idiot bash my skull for?”

“Gee, I don’t know, because he’s an idiot, and he was drunk, and he fell asleep in an alleyway until he heard you two coming, and then he lurched out of the alleyway with the brick and he hit you by mistake? Then, realizing his mistake, he went ahead and bashed in your husband’s skull?”

“Oh, so I’m at fault because this Billy Baskins is a moron? Listen, buster, I am not taking the rap for this one. And anyway, even if I had meant for this retard to really bump off Jerry, maybe Jerry deserved it, because all that guy ever did was get drunk, and when he got really drunk he’d slap me around, and when I threatened to leave him he said he’d break a beer bottle in my mug first so’s nobody’d want me no more. So, yeah, I ain’t saying I’m responsible for getting Jerry bumped, but maybe he deserved getting bumped. Look at my face. What kind of a man would threaten to break a beer bottle in this puss? Answer me that, St. Peter.”

St. Peter looked at her prematurely worn and haggard face, and all the sad stories of a sad lifetime it told, and he heaved a great sigh.   He closed the book, took out a pipe, and began filling it from a leather pouch.

Marie waited. She had said her piece. She had put up with ten years of marriage to Jerry McCarthy, she figured she could take anything this ham-and-egger could dish out, and more, if she had to.

St. Peter lighted up his pipe with a kitchen match, took a few puffs, and then finally he spoke, without looking at her.


The docent led Marie through a great entrance hall, then through several long corridors and large empty rooms, and finally he opened a door to a barroom not unlike Bob’s Bowery Bar. It was crowded, and smoky, just the way Marie liked a bar to be.

“Grab a seat anywhere, table or bar, and a server will be right with you.”

Marie had always been a sit-at-the-bar kind of gal, so she headed for the one empty stool she saw, climbed up on it, put her purse on the bar and took out her cigarettes.

“Well, look what the cat dragged in,” said Jerry, sitting there to her left.

It looked like he was drinking his usual, bock beer.

The bartender came over, and Marie ordered a Tokay wine.


– What the Cat Dragged In, and Other Tales of the Supernatural, by Horace P. Sternwall, a Perma Book “paperback original”, 1954; out of print.