“A Town Called Disdain”, Episode Three: the strange tale of Lefty Schiessen and the Browns 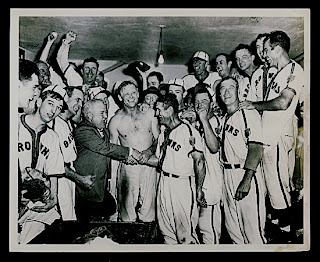 Previously in the “director’s cut” of A Town Called Disdain, famed filmmaker Larry Winchester’s long-lost epic of the golden West: September, 1969. The young soldier Harvey has returned to Disdain, NM, and shortly after his arrival shoots the nasty bully Bull Thorndyke in self-defense at Burt’s Hideyway, the roadhouse where Harvey’s mom Doris works. The local rancher Big Jake Johnstone then offers Harvey a job: serving as a sort of guide to the two mysterious and glamorous strangers Dick and Daphne “Smith”.


After a while most of the guys from the local minor league team, the Browns, drifted in after their day game. They were a grizzled, sad and lost looking bunch. The Browns’ ownership had been in complicated litigation since 1963 and in consequence since that time not a single player had either been sent up or sent down or traded or sold or released or in any other way actively removed from the roster. And neither also had anyone been added to the roster. The team had however been winnowed by extra-managerial forces; two men had committed suicide; one had been killed in a barfight involving a local motorcycle gang called the Motorpsychos; one man had died of dysentery after a game down in Agua Negra; one man had gone hopelessly insane and was now in the state mental hospital up at Las Vegas; and one man was in prison after attempting to murder one of the putative owners of the team, Mr. Big Jake Johnstone. Oddly enough in all that time not one man had simply up and quit. Their status in the minors was wispy at best. They were no longer considered part of any actual league, but a scattering of teams across the Southwest and Northern Mexico played them occasionally out of pity or for laughs or for the opportunity to test their mettle against the legendary Lefty Schiessen.

Lefty Schiessen had been a star prospect just coming into his own in his rookie season with Philadelphia when he sprained his ankle sliding into the second base bag on a Texas League double to right. After the sprain had partially healed he had been sent down to Disdain for what was intended to be a short rehabilitation assignment. The first court papers in the team’s litigation were served the next day, and Lefty was trapped. Right now he was twenty-eight years old and in the prime of his powers. Those in the know considered him to be one of the premier lefthanders in the game. Generally speaking the only games the Browns won were the games Lefty pitched. In his nearly six full seasons with the Browns he had won twenty or more games each year. He had thrown eleven no-hitters, and in one game he had struck out twenty-three batters in eleven innings (a game which the Browns lost on a throwing error in the twelfth, 1-0). When he lost it was invariably because his own team had failed miserably both in offense and defense.

Over the past summer Lefty had discovered LSD and it amused him now to trip on his pitching days (and many of his off days as well). He pitched even better on acid, although he did take a lot longer between pitches and often lost track of the count and how many outs there were. But when he was really on he could make that ball do whatever he wanted it to. He’d stand there on the mound rubbing the ball into his glove, feeling his energy flow into the ball, warming the ball, and he’d wind up and let it rip and watch the ball fly, pulling a long white drug-induced comet’s tail behind it, and the batter would swing, his bat fanning out a yellow translucent screen, and thwap the ball sank into the catcher’s glove and the comet trail sucked itself into the ball and the umpire called the strike. Oh yes.

He hit a lot better on acid too, the incoming ball’s flight painting that white opalescent line in the air just to the spot where he would slam the meat of his bat into it and send it flying out there again, although sometimes as he ran down to first after cracking the ball and still feeling the thwack in his hands and wrists it seemed that the base was rushing toward him, and as his foot hit the bag the thud sent a jolt up his leg and into his spine and up into his brain and as he rounded the bag he felt he was taking off, off, out of there, out past the empty grandstands, out of that grubby hot little park and out over the desert and over the mountains beyond and away, away from Disdain forever, but he wasn’t.
****

(Click here for Episode Four. And kindly turn to the right hand side of this page to find a listing of links to all other chapters of Larry Winchester's A Town Called Disdain, a Dick Clark Production.)

Brings back memories of Vida Blue pitching on acid and Steve Carlton pitching on that mysterious "red liquid" Pete Rose would give him during the 1980 World Series.

I think Vida pitched so well because he was scared shitless what would happen if someone connected with a line drive back to the mound.

Word. Not to mention guys like Babe Ruth and Mickey Mantle dragging their asses to the ball park hungover as hell and still hitting a homer or two.

I'm really Glad i found this site.Added danleo.blogspot.com to my bookmark!