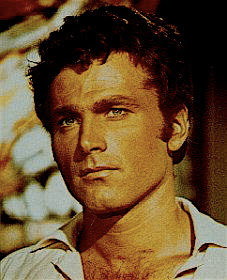 Here’s Larry Winchester in his (sadly out-of-print) memoir I’ll Take the Low Road, talking about the making of this, his second European western:

I’ll be honest with you, thanks to Legs I developed quite a taste for LSD at this time. Legs and I were both pretty much tripping all through the shooting of Rave-Up at Roderick’s, and right on through post-production. (Besides being co-writer, Legs co-produced the show with me, as he had done so many times before and as he continued to do.) There is nothing quite so satisfying as waking up, having a nice strong cup of English breakfast tea, dropping acid and heading off to ten or eleven hours straight in the editing room. Our editor was kind of a square, so Legs and I wouldn’t let on that we were tripping our asses off all day. After work we’d go to the pub and come down on pints of Young’s Special London Ale. One night we met up two American friends of Legs’s, this beautiful couple named Dick and Daphne Ridpath. Well, we thought the acid we had was good, but this pair had some of the Owsley Special Primo. I’ll never forget, the next morning, we’re all standing on the middle of London Bridge and the dawn was just starting to lighten the sky, when I suddenly said:

The other three just sort of look at me, and then after what seemed like about five minutes, this Daphne (beautiful, tall girl, legs that wouldn’t say uncle in a brand new psychedelic Mary Quant minidress) says:

“I thought that’s what you said. Are you trying to fucking freak us out, man?”

“But what does ‘ride a dead horse’ mean, you nut?”

Walking the Ridpaths back to their hotel, I suddenly started singing; the melody and the rest of the words just came to me:

So, after a nice long sleep I call up my old pal Dino di Laurentiis in Rome and tell him I've got this great idea for a new western, Ride a Dead Horse. Dino said, sure, whatever, he was looking for a new vehicle for Franco Nero anyway.

After we finished up post on Rave-Up, Legs and I went right down to the location in Almería, Spain, and while we were overseeing pre-production we knocked out a script, still tripping our gourds out every day. We tried and tried to get something about riding a dead horse in that script, but we just couldn’t do it. The best we could come up with, and we only thought of this the night before principal shooting started, was our hero, Franco, the returning Union soldier who’s come back to his hometown to find that it’s been taken over by an evil rancher (Laurence Olivier), as he’s riding into town he meets an old gypsy woman who tells him, “Ride a dead horse.” Franco just gives her his patented ice-blue gaze, flips her a silver dollar, and then rides on into town. When the movie ends, after he’s killed all the evil rancher’s men and the evil rancher too (because they massacred his family), he meets the old gypsy woman on the road again, and once more she says, “Ride a dead horse.” Franco gives her the gaze, flips her a silver dollar and rides off, with Frankie Laine singing the theme song.

People loved it. Nobody knew what “ride a dead horse” meant. Hell, I didn’t know what it meant. But it sounded cool. And when it comes right down to it, sometimes just sounding cool is good enough.

Ride a Dead Horse went on to become one of the most profitable European films of 1965. Unfortunately, it has never been shown in the United States and is only available on DVD from the Japanese company Ha! Karate, with German dialogue and Japanese subtitles. I recently saw a pristine 35mm print of the English-language version in the small screening room room of Larry’s house on North Ivar Avenue in Hollywood. I was blown away. Larry and his collaborators take a hackneyed plot and ride it the way a fine jazz band on a good night will ride a 12-bar blues: every moment clicks and then slides smoothly into the next, building solidly and inevitably to climax and dénouement.

And I just can’t get that theme song out of my head.


(For links to reviews of some other great Larry Winchester titles, check the sidebar of this page. Dig also our serialization of the complete and uncut version of Larry's legendary novel A Town Called Disdain, available exclusively on this site.)
Posted by Dan Leo at 2:21:00 AM

Saw this flick on a double bill with another Winchester movie, "Hitch-Hike to Hell", at a tiny theatre near the Sorbonne, in Paris, 1971. I was wasted on strong African hash. When I left the theatre I thought I'd never really have to see another movie ever again. Of course I did go on to see other movies after that, but I can honestly say I've never again had a cinematic experience like that night.

But then maybe it was the strong African hash.

"And when it comes right down to it, sometimes just sounding cool is good enough.

Spanish Property for Sale
Almeria Villas Spain and Almeria property
Confused with all the publicity and advertising surrounding Almeria Property? Prefer some refreshing honesty? .......then welcome to Almeria Villas Spain , a family run company where our 20 years experience of living and working in Spain combine to bring you a hand picked selection of Almeria property for sale including villas, townhouses and apartments at prices that other companies find difficult to beat.