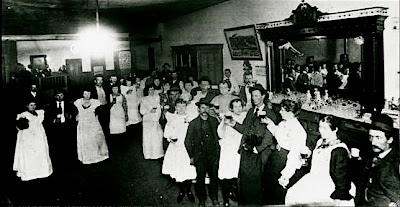 A recently discharged young soldier named Harvey has just this day returned to his home town of Disdain, NM, and has gone directly to the local roadhouse, Burt’s Hideyway, where he meets up with some of the old gang, including an odd little boy named Cleb Parsons and Harvey's mother Doris, who waits on tables there. He also encounters the vastly unpleasant bully Bull Thorndyke, and winds up shooting him dead in self-defense with town Sheriff Dooley’s own pistol.

A mysterious couple named Dick and Daphne “ Smith” have also arrived at Burt’s, there to be greeted by the local rancher Big Jake Johnstone. Mr. Johnstone offers Harvey a job as local guide for Dick and Daphne, who will be staying at Johnstone’s ranch. Harvey accepts.

There has been a strange interlude concerning the local minor-league baseball team, the Browns, and their LSD-imbibing star pitcher, Lefty Schiessen, which seemingly has nothing at all to do with the plot, if there is a plot.


“Damn,” said Harvey softly as Dick landed yet another bullseye.

“Amazing,” said Dick. He went up to get the darts. Big Jake and Mrs. Smith still sat at the table. They had all had a great big steak dinner with plenty of champagne, and Big Jake was leaning way over the table toward Mrs. Smith and they appeared to be deep in conversation.

“Well I find that hard to believe, sir,” said Harvey as he took out his old Cub Scout wallet again.

It was his last five. He took it out and handed it over.

“Thanks, Harve. Another game? Gotta give ya a chance to win some of this back, fella.”

“Care to make it interesting?”

“Sir, that there was my last five-dollar bill.”

“Oh. Gee. I’d like to give you a chance to win some of it back. I really stink at pinball.”

They headed through the bead curtain out into the barroom, which was all packed and hot and sweaty with locals and baseball players and guys from the air force base, everybody drunk and yelling, a ball game on the TV and the Sir Douglas Quintet on the juke, and the old wooden ceiling fans slowly churning up the smoke and mushing it back down again.

They got to the machine and nobody was on it. Dick insisted on using his dimes for the first two games, and he punched the ball out.

“Sir, can I ask you a personal question.”

Even though he stood right next to Dick he had to speak loudly to be heard.

The ball bounced back and forth on the top of the board, back and forth, slower and slower. Dick’s hands barely touched the machine.

“Them scars on your fingers. How the fuck did you get them?”

He looked at Harvey, then held out his hand and looked at the scars. The ball had paused at the edge of the slot at the top of the board.

For some reason that ball was holding absolutely still. And it was like Harvey and Mr. Smith were in a little pocket of calm here in the midst of the chaos of the bar.

“Um, what branch of the service was you in, sir?”

Dick turned his gaze back to the board and the ball began to move now, dropping down the slot in a straight line toward the hole at the bottom but just as it was about to slip through he dropped his right hand, hit the flipper button with his middle finger and knocked the ball straight up into a bonus hole. 3,000 points.

The ball popped out of the bonus hole and Dick gave a nudge of his hip and it fell into a double bonus hole right above it and the numbers started racking up.

The ball leapt out of the double bonus hole, Dick gave the machine the slightest push and the ball dropped back into the other bonus hole and really started clanging out points.

Dick took his hands off the machine and took a box of Craven A’s out of his shirt pocket and offered them to Harvey.

Dick smiled and cocked an eyebrow as he lighted Harvey up with his battered old Ronson. He lighted himself up and turned back to the machine just as the ball was heading for the chute. He touched the button and caught the ball on the end of the flipper and it sailed back up into the big money region where it started maniacally bouncing from pillar to post and racking up points like a motherfucker.

“But like how exactly did you get them scars, sir?”

“Well, it looks like some motherfucker pulled out your fingernails with a pair of needlenose pliers.”

The ball fallen into some new special hole and the machine was ringing and buzzing and vibrating. Harvey said something.

“I said were they tryin’ to make you talk?”

The ball popped out and proceeded to bounce furiously back and forth between two thousand-point bars. Dick seemed to be getting a little bored. He looked around the bar, smoking pensively.

“Well, to be honest I was quite willing to answer the questions they were asking me even before they started to pull my nails out. But they didn’t like my answers, so...”

Doris walked by with a trayful of empty beer bottles and she smiled and shrugged her shoulders at Dick and Dick waved his cigarette.

“They thought you was lyin’,” said Harvey.

Once again Dick turned back to the game just as the ball bounced free.

“Well, let’s say they were entertaining that possibility. Then they threatened to cut my balls off.”

He banged the right-hand button hard with the heel of his hand and the ball soared up once again into the big-money zone.

“Then I talked. Talked a goddamn blue streak and told them all sorts of shit. Saved my balls anyway. Nothing like the threat of castration to get the creative juices flowing.”

The ball was fibrillating wildly once again in a bonus hole. There were now fourteen extra games on the board.

Dick smiled and clapped Harvey on his narrow shoulder.

Harvey stepped into the breach.

“That tortured you. The Red Chinese?”

“No. I’m pretty sure they were Americans actually.”

He went off into the crowd and Harvey turned back to the machine. The ball popped out of its hole and shot against a wall and down a little alleyway and right down the middle and into the death-hole before he could even wag a flipper.

He still had the fourteen free games and he hoped Dick would take his time getting the beers.

Cleb sat on the floor with his back against the wall sipping a Dr. Pepper and looking up at Harvey.
*****

" Nothing like the threat of castration to get the creative juices flowing.”

A Town called Disdain in a State named Denial in the Country of Inane. How appropriate.