Olney’s own "Patrick, Keith & Eddy": from the Schwarzwald Inn to Einstein Hospital 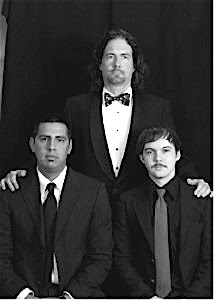 Local boys Patrick “Mule” Mulholland (above, center), Keith Buhler (right) and Eduardo “Eddy” Cintanello (left) formed their popular singing ensemble soon after their graduation from Olney High in 1969. War was raging in Vietnam but back here in the good old “O-Zone” (as Olney’s young people even then referred to their native beloved “hood”) it was party-time all the time wherever these three young scamps lit up the scene. Soon they landed the regular Tuesday “Young Folks’ Night" gig at the Schwarzwald Inn, and delighted the “in crowd” with their scalding renditions of top hits like “Baby I’m-a Want You”, “Papa Was a Rolling Stone”, “Seven Rooms of Gloom” and “Judy in Disguise”.

All went well until the notorious “Greenberg Wedding Incident" of June, 1974. Apparently the lads’ tearjerking version of “We’ve Only Just Begun” as their final encore of the evening was so intense that the ladies just couldn’t take it any more. In the parking lot of the Lord Cheltenham Tavern later that night the boys entertained, in their ’67 Volkswagen “tour bus”, not only three of the bridesmaids but the bride herself. So far, so good, the sort of story the guys could have dined out on for life, except for the fact that the unlocked rear doors of the van were suddenly thrown open by the very drunk Charles “Chuck” Greenberg, the groom himself, with several of his Temple University wrestling team buddies.

Nobody ever said that Patrick, Keith & Eddy couldn’t sing and play. They could definitely sing and oh boy did they know how to play. But they sure as hell didn’t know how to fight. After an average of three months in the hospital for each of the boys, and several more months of gentle convalescence, it was almost a year before the lads felt able to start performing again.

In that year though a new craze had begun to sweep the nation: disco. The boys knew that in order to compete they would have to change their act. Adapting the look was a mere matter of a trip down to Krass Brothers for some new white polyester suits, and adapting their sound was no issue at all for these rapscallions who had previously gone from a Temptations cover to an Elvis tune to a Bobby Goldsboro ballad to "Stairway to Heaven" all in the same medley without batting an eyelash.

The problem was this damned new obsession with dance. Performers were now expected to execute the most fantastic choreography whilst singing and playing. What could Patrick, Keith & Eddy do, Patrick having had both kneecaps broken, Keith having lost his left leg above the knee, and Eddy now able to walk only with the aid of crutches?

Reluctantly, they changed their name to “The Gimps” and an exciting new era began for the band once known, and remembered fondly, as Patrick, Keith & Eddy.


(For more fabulous "Tales from the O-Zone" and further "Legends of the Schwarzwald" check out the right hand column.)

Here was a Patrick, Keith & Eddy audience fave back in the day:

These guys played my own wedding reception at the Catholic War Vets club on Chew Street, back in '73. They totally rocked.

no drum machines until later!

no, that there anon is wrong
http://en.wikipedia.org/wiki/Drum_machine

Keith tells me he used a drum-machine feature called the "FRI Rhythm Ace" which first came out in '67, and which was incorporated into the Hammond B-3 organ he bought on the installment plan with his graduation money in 1969. He did ask me to mention that the boys would occasionally hire human drummers for bigger gigs, most frequently Bobby Fergelman (formerly of the legendary Rear Ends) and Margaret "Midge" McGuire (who thrashed the skins for the infamous Gabby & the Gazelles and several other great Philly bands like Minnie & the Mice, The Sexy Slaves of Soul, and The Girlbots).

"Judy in Disguise (With Glasses)" was, oddly enough, the #1 song in the country for two weeks in January of '68. Performed by one-hit wonders John Fred & His Playboy Band, it was of course a parody of the Beatles song "Lucy in the Sky (With Diamonds)", and more oddly, knocked another Beatles song "Hello Goodbye" out of the #1 spot.

As Larry Winchester always says, "Some shit is too weird to make up."

By the way, thanks and a tip of the Leo lid to anon #3 for the above-cited Wikipedia article, which has more fun fax about the "FRI" drum machine. (Our comments crossed each other in the cold reaches of cyberspace.)

did they play Judy in Disguise, Lucy in the Sky, or as you report, a hybrid called "Lucy in Disguise" ?....

Whoa! Good lookin' out, anon! Yeah, I had a psychedelic mind-slip there (meaning to type "Judy in Disguise, while actually typing "Lucy in Disguise"). I have amended the error, and as a special present to you, along with a tip of the Leo lid, here are the lyrics to "Judy in Disguise (With Glasses):

Keep a-wearing your bracelets and your new rara
Cross your heart-yah-with your live in bra
Chimney sweep sparrow with guise
Judy in disguise, with glasses

(Oh, Uh oh, Uhhh)
Judy in disguise, what you aiming for
A circus of a-horrors, yea yea, well that's what you are
You made me a life of ashes
I guess I'll just take your glasses

Scholars have been debating that point for almost thirty years now.

What I want to know is what the hell is "rara"?

And, finally, now how the hell do I get this song out of my head short of a self-administered lobotomy?

Or I should have said "almost forty years". Good God has it really been that long since this song swept the nation?