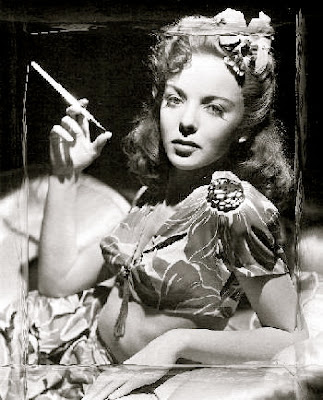 This little gem, long presumed lost, has now been recovered thanks to the noted author and cinephile Kevin McDoom, of the East Oak Lane section of Philadelphia. Mr. McDoom (author of the classic tale “Gangsta Dream”, as well as the play Dumbo and the sprawling epic novel Almshouse Road), a great fan of Larry Winchester’s work, was overjoyed to discover an only slightly deteriorated 35mm theatrical print of this Bob Hope laff-fest in his basement, near the bottom of a heap of old film cans that Kevin bought at auction when the late-lamented Fern Rock Theatre closed in 1992. Kevin very generously sent the film to Mr. Winchester in Hollywood, asking nothing in return except perhaps a mention in the closing credits. Larry oversaw the digital restoration of the film and he is currently in negotiations with the Japanese company Ha! Karate for a DVD release.

At this point let’s turn the tale over to Larry, from his autobiography I’ll Take the Low Road (now sadly out of print, but widely available on eBay):

As soon as I got out of the army in late ’45 I made my way to Hollywood, with stars in my eyes and five or six scripts that I’d scribbled out in pencil in black-and-white marble copybooks in foxholes and bombed-out houses all through France, Belgium and Germany. I rented a room from a couple of nice lesbian ladies on St. Francis Terrace, bought a second-hand Olivetti portable with a sticky “t”, typed the scripts up, and hit the sidewalks.

I took the scripts around to all the big studios: MGM, Warners, RKO, Republic. And not only could I not get arrested, I was kicked out on my ass and told never to darken their studio gates again with my baleful presence.

Finally I started hitting up the Poverty Row outfits that all used to be over on Gower, and Pauly Rosenweig over at Colosseum Pictures finally bought one, Diary of a Dead Man. (Later, Pauly admitted to me that he never even read the script but he liked the title.) Well, I was young and ambitious so I begged Pauly to let me direct, even though I was only twenty-one and had never worked on a picture in my life. Pauly admired my chutzpah and let me work on the show as second assistant director. We shot Diary of a Dead Man in six days. It starred Larry Tierney and was directed by this old drunk named Joe Lerario. Larry and Joe stayed pretty drunk all through the shoot, so it was pretty much up to the first A.D. and the D.P. and me to make sure the picture got made. Well, we did it somehow, and that little movie went on to make Pauly a tidy little profit.

Within a couple of months I was working steady as a first A.D. all day, and churning out scripts in the evenings. In late ’48 I directed my first picture for Pauly, Lady Private Dick, with Muriel Box, and then I did Whackjob Willie with Jerry Colonna and a few others, like Three Dumb Guys and a Dumb Dame, The Damned Don’t Die, and One-Way Ticket to Nowhere. Now these are all B-pictures, of course, which meant they would be like Z-pictures at any normal studio.

So how did I wind up making a picture with stars like Bob Hope and Ida Lupino, Paul Douglas and Betty Grable?

Well, it turns out Bob Hope liked to play poker, and he played a regular game with Pauly Rosenweig and some other Hollywood guys. One night Bob lost big to Pauly, like fifty grand. Pauly, knowing Bob’s kind of a skinflint, says, “Bob, I’ll forgive the debt if you make a picture for me.” Bob says he’s all booked up for the rest of the year except for the next two weeks. Pauly says no problem; he gets me on the horn, says he wants a Bob Hope vehicle and he wants to start shooting in a week. So, I whipped something up, Bob called in some favors with some of these other top actors, and a week later I’m directing this little farrago I’d thrown together called Calling All Call Girls.

Unfortunately, the Hays Office and the Catholic League of Decency and the Daughters of the American Revolution all came down on the picture like a ton of shit-bricks, but Pauly didn’t care, he released it anyway. It was probably the first underground hit, because no newspapers would carry ads for the show, and none of the stars would further risk their reputations by doing any publicity appearances. Most theatre owners wouldn’t carry it, but Pauly got around that by renting the theatres and posting flyers around the neighborhoods. The people lined up around the block, and I think Pauly pulled in more than enough to cover the fifty grand that that cheapskate Bob Hope was trying to get out of paying him.

Larry sent me a DVD of the digital re-master, and this movie is indeed a treat. Bob Hope plays police officer “Dugs” Doogan, an easygoing patrolman who enjoys a very shall we say laissez-faire relationship with the ladies of the evening (Ida Lupino, Thelma Ritter, Betty Grable) on his back-lot beat. However, a new captain takes over the precinct, the self-righteous Captain O’Reilly (Paul Douglas), who demands that Officer Doogan rid his neighborhood of these frolicsome floozies. Doogan tries to convince the gals to be a bit more discreet and offers them refuge (and a comfy place of business) in the ramshackle old townhouse he shares with his widowed mother (Marjorie Main).

Just when things seem to be settling down the girls start disappearing. A murderer is on the loose in the neighborhood, calling himself “The Son of Jack the Ripper”! Doogan gets on the case and finally trails the murderer to an abandoned warehouse. “The Son of Jack the Ripper” turns out to be none other than one of the ushers at Doogan’s parish church, on a one-man mission to rid the neighborhood of vice. Fortunately, he hasn’t killed any of the missing girls, but has merely locked them up in the warehouse and inflicted upon them an intense course of study of The Baltimore Catechism. A great fight ensues, featuring the first-ever use of a chainsaw in cinema history. Officer Doogan, with not a little help from the kidnapped and bored-silly girls, finally subdues and arrests the madman.

In the end, justice triumphs. It turns out that the presiding judge in the case (Guy Kibbee) is a longtime client of Thelma Ritter’s. The judge dismisses the case, and Bob turns to Ida Lupino and says, “Babe, would you consider making an honest man of me?”

“Oh, buster, would I!” exclaims Ida, and the movie closes happily with everyone shuckin' and jivin' out of the courtroom to the tune of Pee Wee Russell's "Wailin' D.A. Blues".


(Check the right hand column of this page for links to many other entries in our ongoing series "The Films of Larry Winchester", as well as to our unexpurgated serialization of his long-lost novel, A Town Called Disdain.)

I keep e-mailing Turner Classic Movies asking them to show this movie, but the bastards keep refusing!