“Railroad Train to Heaven”, Part Eleven: Arnold Schnabel and the beatniks, the train and the miles 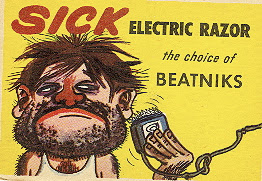 In our previous installments of this never-before published sprawling memoir by Arnold Schnabel, “The Rhyming Brakeman of Olney”: Arnold, still in recovery from completely losing his mind the previous winter -- and being hospitalized at Byberry for two months, followed by a return to his job on the railroad and a subsequent summary leave-of-absence (thankfully at half-pay) resultant to some sort of oddness of behavior or demeanor -- has gone with his mother to recuperate at the huge ramshackle Victorian boarding house of his three maiden aunts, in Cape May, NJ. He has taken to long evening solitary swims off the usually deserted stretch of beach that curves down to the Point; one night he swims back in and meets four “beatniks” sitting by a fire on the beach. They invite him to smoke marijuana, and he does, for the first time in his life.

My new friends invited me to their so-called “pad” for dinner. Of course I had already had dinner at our usual time (6:00 PM) but I was now ravenously hungry, I could have gnawed on one of the logs in the fire, I could have bounded back into the surf and swum under water with my mouth open, devouring seaweed and small fishes; in short I said, “Sure. Thanks.”

We walked townward. How merry it was to walk along the sand in this new exuberant (if slightly reminiscent of my previous psychotic fugues) state. I felt like some silly large dog, prancing ahead of and around some new-found human friends. They seemed so much more interesting than the dull people I had met and invariably not befriended (or not been befriended by) all my life.

They lived above a jewelry shop on Jackson Street. An apartment hung with tapestries and beads, with candles in Chianti bottles and bamboo rugs and lots of oriental cushions and pillows on the floor.

Elektra and and the girl called Fairchild or Fair Child set to work making spaghetti in the kitchen that was open to the small living room. Rocket Man put a record album on. It was a very strange sort of saxophone jazz, strange to me, anyway, who normally never listened to anything stranger than Lawrence Welk or Larry Ferrari, although I suppose they’re pretty strange too in their own ways.

Now I was totally confused. Why was he calling me John?

“I think he digs the train,” said Rocket Man, coming over to where we were sitting on the floor around one of those great wooden spools that you normally wrap cable around. He sat down, smiling. “Doncha, Arnold. You dig the train, man.”

“Well, of course I do,” I said, doing one of my little imitations of a sane person. “The train, after all, has really been my, my whole life –”

“Your whole life?” said Gypsy Dave. He was rolling another "joint" on a record album cover. It was The Freewheelin' Bob Dylan, whoever he is. “That is really heavy," he said. "I mean, I dig the train, and the bird too, and you know, a lot of cats, but I wouldn’t say that they’re my life. But the train means that much to you.”

“No, man,” said Gypsy Dave. “It wouldn’t be voluntary. But that’s the beauty of it. It just, like, takes over you. And that’s beautiful man. Wait, listen, now miles is coming in.”

Gypsy Dave held a finger in the air. I could understand now. Me leaning out from the cab of a hurtling locomotive, staring ahead, watching the myriad storming miles coming in, always coming and speeding by underneath the train's wheels. All those miles coming in for all those years, how many thousands, perhaps millions of miles, coming in, and going...

Gypsy Dave handed me the now-rolled "reefer", and I lit it with my lighter. A muted trumpet wailed sadly but wisely, and we stopped speaking and just listened.

(Click here to go to the next episode. For links to other installments of Railroad Train to Heaven, as well as to many of Arnold Schnabel’s classic poems, please go to the right hand column of this page.)
Posted by Dan Leo at 3:47:00 AM

Life's going so well for Arnold. That poem when he was in the mental hospital and after six days and nights strapped to the bed he was noticing the sheets were no longer clean broke my heart.
These beatniks better be nice to him. Didn't you say he was...um, innocent of romance? The whole crew was admiring his physique after he went swimming. So, I'm hoping he, for once, gets his fair share of fun. What a wild hope. When we know so well that nothing is ever fair, not fun or life or death.
I've got to stop worrying about the guy. Maybe a few of his earlier poems can cure me of that.

Arnold Schnabel truly is the modern day Dickens. He is favorite author to read on a rainy Sunday afternoon, next only to the master himself.

Who knows what will happen next with Arnold?

I sure as hell don't.