“A Town Called Disdain”, Episode Eleven: an unpleasant encounter on the road to the ranch 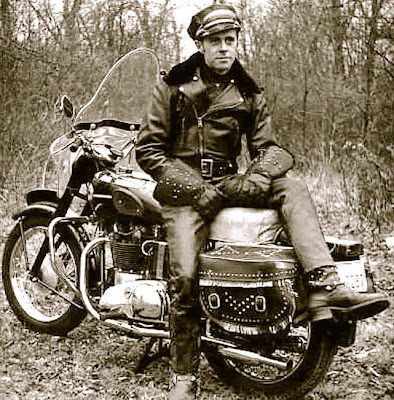 In our previous episode of this “uncut” version of Larry Winchester’s epic novel, :

The time is September, 1969. The moon landing and Woodstock and the Manson murders have all taken place the previous month. The number one song in the country is "Sugar, Sugar" by the Archies...

Twenty-year-old Harvey has returned from a court-ordered hitch in the army to his impoverished and depressing hometown of Disdain, New Mexico.

It is still only Harvey's first day back, but already he has killed a bully in self-defense and been hired by the local rancher Big Jake Johnstone to act as some sort of guide to a mysterious couple named Dick and Daphne “Smith”.

(This episode is rated R for ridiculous writing).

Big Jake got too drunk to drive, so Dick drove him in his red Cadillac and Daphne drove with Harvey in the Thunderbird. Daphne took off first, with Harvey giving her directions out to the Johnstone ranch.

Five minutes into the drive Big Jake, who had been lolling in his seat singing horribly along with Glen Campbell’s “Wichita Lineman” on the radio, suddenly said, “Ah, Christ, pull over, Dick. I’m a-gonna hurl!”

Dick pulled expertly over to the side of the road and Jake got the door open and tumbled out to his hands and knees and started puking into the dust.

Dick (pretty much peaking now on the Owsley) turned off the ignition and lit up a cigarette. From the way Big Jake’s massive body was bucking and buckling, like some fat buffalo in its death throes, this was going to take a while.

Harvey felt a little nervous the way this Mrs. Smith was driving -- very steady but very fast, but what the hell, at least there wasn’t any traffic at all out here.

Lights up ahead, then a whole lot of lights, coming straight at them, then it was a whole bunch of madmen on motorcycles hogging the whole road and heading straight at them, and Mrs. Smith looking damn near likely just to plow right on through them hell bent for leather and damn the torpedoes.

Harvey closed his eyes, he could feel the Thunderbird swerving and lurching then hitting something hard and swerving again and then it jerked to a stop and somehow he was in the back seat. He clambered up and Mrs. Smith was slumped over the steering wheel. He reached over and turned off the ignition because he was afraid the car would blow up, and then he passed out over into the front seat, rolling down into the foot space.

The motorcyclists pulled their choppers up all around the Thunderbird, their headlights shining directly into the car. Through the swirling cloud of dust and exhaust they’d created they looked at at the beautiful woman and the young soldier both groggily trying to sit up straight in the front seat.

The motorcyclists laughed and laughed, showing their broken discolored teeth in the harsh jagged light.

They were called the Motorpsychos (a name they had stolen from a certain trashy drive-in movie); self-styled “scum of the scum” -- who for the most part had been drummed out of other motorcycle gangs for behavior too vicious, swinish, dishonorable and vile even for the likes of the Hell’s Angels or the Pagans -- they lived in foul caves in the wasted hills, subsisting on the profits of the drugs they sold to the local youth.

Their leader, a former Oxford don called Moloch, switched off the engine of his Vincent Black Shadow, kicked his kickstand down, dismounted and then vaulted up onto the hood of the Thunderbird. He stood there with his hands on his hips, grinning through his scruffy beard. Greasy filth covered him from head to toe. He was a rangy tall man in tight leather pants, jackboots with two-inch heels and a black leather jacket worn directly over his bare flesh. His dark blond oily hair was long and knotty, falling dramatically around his sculptural shoulders. He wore mirrored Ray Bans and an SS officer’s cap; a ragged Magdalene College scarf, once black-and-white but now the color of a week-old dead trout, was knotted around his corded neck and flapped behind him in the night wind; a tarnished Iron Cross hung on a tattered black ribbon over his chest. He had at one time been a stunningly handsome man, but now his nose was crushed, his lips were brutally scarred, and his right eye had been thumbed out in fight with one of the Wheels of Soul and thus he he wore a black leather eye patch. He had never bothered to have a glass eye installed in the empty socket, and whenever he encountered a little child he liked to remove his sunglasses, lift up his eye patch, politely say hello, and then watch the child burst into tears.

“We are going to have some fun,” he declaimed. His diction was impeccable, and this utterance was met with a chorus of cheers from his cohort.

(Click here to go to Episode 12. Check out the right hand column of this page for links to the other episodes of Larry Winchester’s A Town Called Disdain -- soon to be a major motion picture from Selmur Productions -- and for links to appreciations of many of Larry’s classic films.)

I can't wait for the movie to come out. But who's going to play Moloch? Jeremy Irons?

It's moving too fast. I'll check it out tomorrow, when I can rev my head up to match the speed. Then maybe we can argue: ridiculous or sublime?