“Railroad Train to Heaven”, Part Ten: Arnold Schnabel meets up with the beatniks on the beach 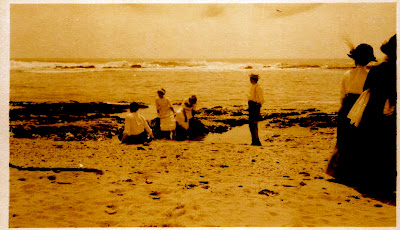 Herewith another installment of our serialization of Arnold Schnabel’s sprawling and vast memoirs, which have already been compared favorably to those of Ulysses S. Grant, St. Augustine, J. R. Ackerley and Erroll Flynn by publications as diverse as The Catholic Halberd and Times, The Olney Times, The Lawncrest Bugle & Times, and The Harrowgate Herald and Times.Just to bring up to date any newcomers to the world of Arnold Schnabel ("That poet of the people." -- Steve Allen): one night in January of 1963, Arnold suffered a complete nervous collapse. After eight weeks in the Philadelphia State Hospital at Byberry and two weeks’ rest at home, Arnold returned to his job on the Reading Railroad. Apparently he showed signs of a less than complete recovery and within a couple of months was put on an indefinite leave of absence at half-pay. In late May of that year Arnold’s mother (with whom he lived his entire life save for his three years in the army, 1942-45) took him to recuperate in the fresh sea air of historic Cape May, NJ, where they stopped with his mother’s three good maiden aunts (Greta, Edith and Elizabetta Schneider) at their ramshackle Victorian boarding house on Perry Street.

In our previous episode Arnold went with his cousin’s young son Kevin to buy some used comic books, a seemingly simple enough adventure, but then nothing is simple in the world of Arnold Schnabel, as the following masterfully-told little tale will bear out.


A curious incident later in the day.

As usual of late, after digesting my supper over a novel (The Outfit, by Richard Stark) on the porch, I took my towel and my cigarettes and walked down to that bereft long stretch of pebbles and sand and desolation where I take my daily swim.

When I got to the beach there was no one there, as usual. The sun was dipping down beside Cape May Point lighthouse, as usual. I took off my pocketed t-shirt and rolled it up in my towel along with my wallet, cigarettes and lighter, then tossed the towel into a tuft of scraggly grass under that long high wave of sand that edges the beach, with a fence of wire and sticks running drunkenly along its crest.

I strode into the water, and when I got about thigh-deep I dove in, and swam out.

Each day I’m getting stronger, each day I swim farther out, and I swim for a longer time.

Sometimes I wonder about sharks. Or cramp. Or even a heart attack. Would my body be found? And in what awful condition?

A mile or more from the shore I treaded water, the sun had now sunk beyond the bay, and on the upsurge of the swells I could clearly see the lights of Delaware, as if beckoning. Well, I may be a strong swimmer now, but not that strong, and, besides, what would I do in Delaware?

I headed back in, and as I swam I noticed a small living light against the grey dimness of the beach.

Sloshing in with the surf I saw a group of four people gathered around a little fire. I would have ignored them except they were sitting right near where I’d left my rolled-up towel. I walked towards them. They were all sitting cross-legged, smoking, they had a large wicker wine jug and they were drinking out of Dixie cups. There were two young men and two young women. The men had short beards and the girls had long hair, one blond, the other dark. The girls wore long loose dresses, the men wore khaki shorts and t-shirts.

“Cool, man,” said the one fellow. He had luxuriant curly dark hair.

I stepped past them and got my towel out of the weeds. I unrolled it. Everything was still there.

“That was some long swim you took, buddy,” said the other guy. He had slightly sun-bleached hair, a bit overgrown, and his beard was trimmed like Shakespeare’s. “We were digging you out there.”

“It’s so cool you go out here at night all alone,” said the blond girl.

“Yeah, I like it that way," I said. I was rubbing myself with the towel with one hand, holding my t-shirt, wallet, cigarettes and lighter awkwardly all in the other hand.

“You look in great shape,” said the dark-haired girl.

“These guys never get any exercise,” said the dark girl.

“I’m exercising right now,” said the curly-haired fellow, and he took a long pull on his hand-rolled cigarette.

He held in the smoke for a very long time and then exhaled.

He blinked, smiled, and said, “Hey, buddy, you want a toke?”

He held out the handrolled cigarette.

Don’t ask me why, but I sat down with them and smoked some marijuana. This was my first ever social encounter with beatniks, and the first time I had ever tried “reefer”. Let’s face it, I’ve been a goody two-shoes for most of my life, and where did it land me but the loony bin?

Before long I was telling them my whole life story. Well, I gave them the short version. They listened politely, and even, oddly, seemed to be interested.

As sane as I’ll ever be, I thought, which might not be saying much.

“I think you had a mystical experience,” said the blond girl, who went by the name of Fairchild, or Fair Child, I didn’t know how she spelled it.

“Like Paul on the way to Damascus,” said the Shakespeare guy, whose name was Rocket Man.

“Or, like Wile E. Coyote when the Road Runner tricks him into going off the edge of a cliff,” said the dark-haired girl, whose name was Elektra.

“I want to read your poems, man,” said Elektra.

“I assure you they’re not good,” I said.

We sat smoking and talking for another hour or two, and then all of a sudden we realized we were all very hungry.

(Click here to go to the next episode. For links to previous episodes of Railroad Train to Heaven and to the poems of Arnold Schnabel, please see the right hand column of this page.)
Posted by Dan Leo at 5:07:00 AM

Arnold was so avant-garde and he didn't even know it.

Hey Dreamweaver,
You're so right. He was, like, cool before he knew he was so cool.

I've always believed, perhaps protectively, that no artist can create something sublime without risking the ridiculous.
Here Arnold sounds innocent, if dripping on, an appreciative, provocative audience.
Either way, I have to admire the man's abysmal poetry for the haunting heights, that with a bit more luck, it might have reached.
And this story, perhaps because he wasn't keen on going so far beyond the pale as to threaten (again) his sanity, is totally fine, if neither quite banal nor yet transcendent.

I'm sure that -- in his railroad train in heaven -- Arnold thanks you humbly, dear Grasshopper.

One of the things I like about Arnold is that he seems, even in his precarious post-breakdown period, to have a good sense of the ridiculous.

I think he touches on some of the points you bring up in his poems "Abandoned" and "Inspiration".

"Let’s face it, I’ve been a goody two-shoes for most of my life, and where did it land me but the loony bin."

Does this end up on his tombstone?

Now that would have been a great epitaph, but somehow I don't see Arnold's mother going for it.

But I may be wrong.