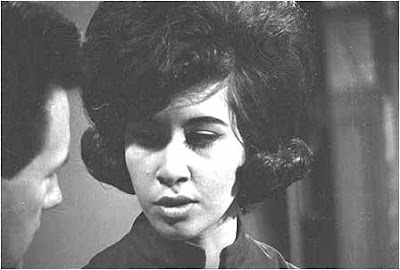 This picture came about through an odd confluence of factors, as so many of mine have done. Helen Shapiro, who’d been a top singing star at the age of 14, was now about 18 and already her pop career was waning. We’d had a ball working together on Long Tall Shorty, and Helen and her manager, as well as Tony Hinds at Hammer, were all interested in finding a starring vehicle for her. Somewhat surprisingly, Helen wanted to try something really dramatic, although she had nothing against doing a few numbers in a movie. As it happened I had just picked up and read a used copy of Stephen Crane’s naturalistic classic Maggie: A Girl of the Streets, and suddenly I had one of those eureka moments. What the hell, the book was in the public domain (always a good thing), so why not update the book to the story of a poor girl in contemporary London? I called in Alan Sillitoe, who already had some serious kitchen-sink credentials with Lonelieness of the Long Distance Runner and Saturday Night and Sunday Morning, and in a couple of weeks we had a shooting script.

Maggie, another item from Larry’s rich “European exile” period, is ironically one of the best examples the “Kitchen Sink” school of British cinema. The cockney charmer Miss Shapiro turns in a truly heart-rending performance as Maggie, the garment-worker’s daughter who tries to better herself as an East End pub singer but who falls prey to the nefarious “manager” (i.e. glorified pimp) Clive (Adam Faith) and meets an untimely and inglorious end. Tom Courtenay plays Reg, the young fishmonger who worships Maggie in vain, and Rita Tushingham plays Edna, his sister and Maggie’s best friend, who tries in vain to steer her clear of the venal Clive.

Shot entirely on location in Miss Shapiro’s home district of Upper Clapton, East London. Features Helen singing “Does Your Chewing Gum Lose Its Flavour on the Bedpost Overnight”, Lennon & McCartney’s “Misery” (written especially for Helen), and a pair of Hubert Gregg classics "I'm Going to Get Lit Up (When the Lights Go Up in London)" and “Maybe It’s Because I’m a Londoner” with those immortal lyrics:

(Currently available only on a deleted British double-sided DVD (with another kitchen sink classic This is My Street on the flip side. Turn to the right hand side of this page for links to other classic movies from Larry Winchester, as well as to our serialization of the director's cut of his long-out-of-print epic novel, A Town Called Disdain.)