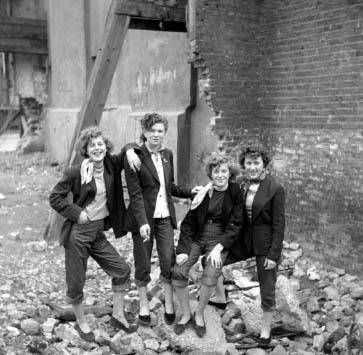 Gabby and the Gazelles were probably the most notorious of the rock groups that sprang up in Olney in the post-British invasion era of 1964-66. Gabrielle “Gabby” Dunne, the girlfriend of Tom Dooley of the popular Rear Ends, had gotten increasingly annoyed at Tom getting all the attention, and so she decided to form her own all-girl band after she graduated from Cardinal Dougherty High School in June of 1966. Gabby recruited Martha “Marty” O’Connell for lead guitar, Margaret “Midge” McGuire on drums, and Louise “Lou” Lerario on the Fender bass. Gabby sang lead and played rhythm guitar. Although all of the girls had musical training (Gabby had sung lead contralto in the Dougherty Girls Choir and had studied classical violin since the age of ten), none of them had ever played electric instruments before, and indeed Lou, although an accomplished pianist, had never played any sort of percussion. No matter, they took their high school graduation money, bought their respective instruments and started practicing. Not wanting the group to be just another cover band (even though they were already the only “girl band” in Philly) Gabby simultaneously set to work writing a bunch of original songs. They played their first gig in August of that summer, opening for the Rear Ends (who were opening for the Fugs) downtown at the Trauma. Their distaff version of the rocking hard-guitar sound of groups like the Yardbirds, the Rolling Stones, and the Standells went over like a house afire. Soon the girls stepped out of the mighty shadow of the Rear Ends and were getting their own gigs around town.

Gabby and the gals released seven or eight completely blistering 45s on local labels, including the infamous “Born to be Hip”, which became one of the first ever “underground hits”. Initially this song (put out by the Lawn label, October 1966) got quite a lot of radio play in Philly and South Jersey, especially on Hy Lit’s show on WIBG. But then someone actually deciphered Gabby’s snarled lyrics and the song was quickly banned from the airwaves. This didn’t stop the local kids from buying it though. The Sound Odyssey on 5th Street sold over 5000 copies of this platter in the month of December 1966 alone. The song might not have been on the radio but it was played relentlessly at parties, on jukeboxes at bars like the Huddle and the Green Parrot, and over the sound system at clubs like the 2nd Fret and the Trauma (indeed this song is running through my own head nonstop right now). Radical then, the lyrics are fairly tame by today’s standards:

I was born to be hip don’t gimme no lip, boy
When I slide and slip I like to let it rip, boy
If ya don’t like the way I groove
Then maybe you better just move
on outa my way, boy
Yeah I think you’re gay, boy
So, look out, Pip, I was born to hip!

When I shake my hips my mind just flips, boy
And I like to get me more kicks than pricks, boy
So if ya can’t take my pace
Then get the hell outa my face
And outa my way, boy
Why are you so gay, boy
Ah, just face it, Pip, I was born to be hip!

“We had a lot of fun,” said Gabby recently. “But then all that psychedelic shit came along. I just wasn’t into that crap. I mean I hated “Sgt. Pepper”. And I liked Jimi Hendrix’s guitar sound but his songs were too slow and sludgy for me. I liked playing real rock and roll, and by the summer of ’67 the market for our kind of stuff dried up. Everybody just wanted to drop acid and listen to this spacey shit. So we broke up the band. I was going to Temple, anyway, and so I just concentrated on school. It wasn’t till about ten years later when the Ramones and the Sex Pistols came along that people started talking about Gabby and the Gazelles again, and by that time I had a kid, I was teaching, going for my doctorate in pharmacology. But it’s nice to be remembered. We kicked ass.”

Original pressings of “Born to Be Hip” b/w “Take a Hike” have sold on eBay for $150.
(Check out the lower right hand part of this page for a listing of links to many other fabulous "Tales from the O-Zone".
Posted by Dan Leo at 2:40:00 AM

These girls completely and totally rocked. I didn't see that kind of energy again until I caught the Stooges in their heyday, in 1970. Gabby and the Gazelles were so ahead of their time. And Gabby was so hot.

I had a few beers with Gabby recently, and let me tell you something, Sam, the lady is still hot.

you know where Gabby at?

The lovely and charming Gabby still lives in Philadelphia, although no longer in Olney. She is a well-respected expert in pharmacological research.

Gabby's entirely correct on this one. If it wasn't for the pareidoliac phantasies of the economically 'comfortable' class of the mid-60's and their sanguine desire to go 'Furthur' we would never have moved away from the true root of rockandroll. And you just know that Belaccqua finding matrimonial bliss also had something to do with this. I think Mike Watt said it best, "F**k you Kesey!"

The photo posted is of teddy girls in England and is most certainly NOT behind the Green Parrot. The article claims copies of a recording that Google has no information on sold many copies at Sound Odyssey on 5th St in 1966. The Sound Odyssey that was eventually on 5th St was not even there in 1966. What, exactly, are you trying to pull, here, anyway?

The professors call it fiction. It's a short story.