The Boxing Milkmaid and the Beatle 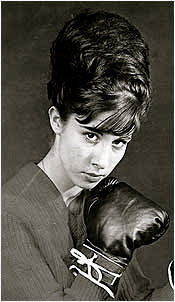 My previous movie with Helen Shapiro (Maggie: a Girl of the Streets) had proven to be a succès d’estime ("Sight & Sound" called it “one of the year’s grittiest and strangest and best”), but Helen’s hardcore fans were perhaps understandably disappointed to see her play a good but unfortunate girl who falls into prostititution and dies an early death. So we decided to leaven it up a bit and give Helen a slightly more light-hearted vehicle in which she would triumph in the end. My old pal Tommy “Rags” Larkin and I had a script about a girl boxer in the drawer that for some reason had never gotten off the ground back in the States. we ran the concept by Helen and her manager, and Tony Hinds over at Hammer gave us the green light. It was a weekend’s work for Rags and I to transpose the story (originally written for Susan Hayward and set in Philly) to swingin’ “à-go-go” London, and a week later we were shooting in Helen’s old stomping grounds in the East End.

This delightful yarn, looked on by some film scholars as an inspiration for future hits like Rocky and Million Dollar Baby, tells the story of Mindy Goldblatt, daughter of milkman Sid Goldblatt (Hugh Griffith), who is diagnosed with a rare form of heart disease, curable only by a very expensive surgeon based at the Mayo Clinic. It just so happens that local boxing promoter Archie Wilde (Christopher Lee) has announced a girl boxer competition: prize money, £1,000 -- just enough to pay for old Dad’s operation. Young Mindy -- already in pretty good condition from helping her dad out on the milk wagon -- goes to the local gym and enlists the aid of local knockabout pugilist Wendell (Oliver Reed). Wendell falls head over heels for Mindy -- and seeing that she’s bound and determined anyway -- he agrees to train her. In an unusual twist, Mindy actually loses the big fight (against a truly fearsome Diane Cilento), but who should be in the audience but the coolest Beatle, John Lennon himself! John, hearing Mindy’s story, and vastly impressed by her gumption, offers to pay for Dad’s operation himself. Then he invites Mindy and Wendell to a Beatles concert and invites her up onstage where he dances a foxtrot with her. Invited to sing a number with the boys, Mindy belts out a rousing “Twist and Shout”. The fans go crazy and a new star is born. 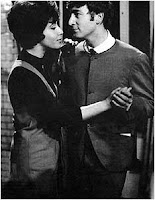 The above summary might indeed sound like utter crap, but somehow this movie is vastly entertaining as well as oddly moving. Unfortunately, tedious legal problems with the Beatles’ record company have prevented this fabulous picture from ever being shown in the States. Sadly unavailable on DVD, but John Barry's jazzy score is available on CD from the Japanese Ha! Karate label.

(Turn to the right hand side of this page for a listing of links of appreciations to many other fine Larry Winchester films. Be sure also to check out our Schaefer Award-winning serialization of Larry's classic novel A Town Called Disdain.)