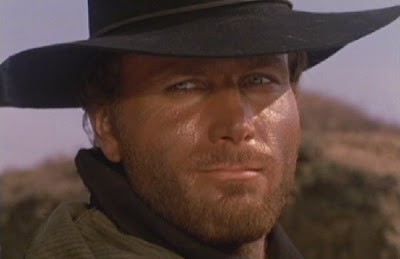 Most film buffs will tell you that the first “spaghetti western” was Sergio Leone’s A Fistful of Dollars (Per un Pugno di Dollari -- 1964). However, as has so often the case in his long and fabled career, it was Larry Winchester who got there first, with Six Bullets for Curly Russell. Some purists attest that the film is not a true spaghetti western because Larry is American. True enough, but the film was made with an Italian crew in Spain (some interiors shot at Cinecittà in Rome), with a mostly Italian cast, co-written by an Italian (the notable novelist Alberto Moravia), and with a score by Ennio Morricone, and I think it legitimate to call this the first real example of the genre. In addition to the Italian production team and European location, the film also has all the hallmarks of the later spaghettis: a lone gunman (the young up-and-comer Franco Nero as the eponymous hero), an incredibly evil black-suited villain (Stuart Whitman), a raffishly evil Mexican general (Raf Vallone), a lovable but cold-blooded Mexican peasant (Gian Maria Volonte), a female star with incredibly bright golden hair (the lovely Mariangela Melato), and lots and lots of ketchup-spurting violence. Indeed it would be fair to say that all the subsequent great spaghetti westerns were in reality “Winchester Westerns”.

Here’s what Larry has to say about it all in his memoir I’ll Take the Low Road:

I was still in Rome, just finishing up post on The Return of the 300 Spartans, when I get a phone call from my producer Dino di Laurentiis. Alberto Moravia -- who was famous for writing these deep novels about the struggle in men’s souls between good and evil -- had written a screenplay, and Dino wanted me to take a look at it. Well, I read it, and Alberto and I met for drinks, and I told him, “Al, this is good, but it’s -- kinda dull, ya know?” “I know,” he says, “I know, this existential shit is so boring. Help me, Larry. You make good movies. Your western The Devil’s Country is my favorite ever movie.” “Is it?” I says. “Sì!” “All right,” I say, “so let’s turn this into a western. With a western you can put in all the deep depressing philosophy you want and still sell some popcorn.” Alberto loved the idea; we went right to work and a week later we had a finished script, ready to shoot.

We show the script to Dino and he loves it. ”But what’s it called?” Alberto and I had forgotten to give the thing a title. So Alberto goes, “I got it. How cool is this: A Bullet for Curly Russell?” And Dino goes “Magnifico, let’s start pre-production.” But I hold up a finger. “Wait, guys,” I say. “Why just one bullet? Let’s make this movie fucking big.” I spread out six fingers. “Let’s call it Six fucking Bullets for Curly Russell!”

So that’s what we did. Leaving out the "fucking" of course...

We had this composer named Ennio Morricone who’d never done a western before. He played me some cues he had roughed out and I took him aside and said, “Ennio. This stuff is great. But the orchestration -- we’ve heard it all before. What about -- I don’t know -- like some electric guitar?” He goes, “Sì! Electrical guitar! Bravissimo!” Then I’m like, “And this one part here, what about some weird singing, like a chorus --” And he’s all, “Sì! Singing! A chorus! Bellissimo!” “Great,” I says. “And while you’re at it stick in a lot of gunshots just for the hell of it.” So Ennio goes back to the drawing board, and when he played me some tapes of the new score he had something really original and good, and, well -- I guess that was where that real spaghetti western sound began...

So we made the movie, and it did okay. Some people say it was ahead of its time, too dark and bloody. Who knows? A couple of years later our star Franco Nero had a big hit with a movie called Django, so they re-titled Six Bullets as The First Revenge of Django, re-released it, and it had an even better second run. I had points in the project, so I had no complaints...

Five or six years later Bernardo Bertolucci adapted a Moravia novel called The Conformist into a movie, and it got a lot of attention and awards. But after it opened I got a call from Alberto and he said, “Larry, The Conformist is a pretty good movie, a little dull and arty, but not bad. But, Larry, my friend, I look on the work I did with you on Six Bullets for Curly Russell as my greatest work.” I was really touched, and I guess it wasn’t a bad flick. I’d say it’s probably in the top ten of my movies. Definitely the top twenty, anyway.

To my knowledge this classic film had only one brief run in the United States, on a double bill with another Winchester title, Bayonets of Blood, in 1964, and has not been seen here since. (There is a Japanese DVD on the market from Ha! Karate Media, a pretty decent transfer, but be advised the only soundtrack options are Japanese and the original Italian. English subtitles are available but they’re not very good. For instance, the headline quoted at the top of this piece reads: “I am called Curley Russel! And the name of you is caca!”)
(Turn to the right hand side of this page for listings of many other classic Larry Winchester titles. Be sure also to check out our Schaefer Award-winning serialization of Larry's epic novel A Town Called Disdain.)