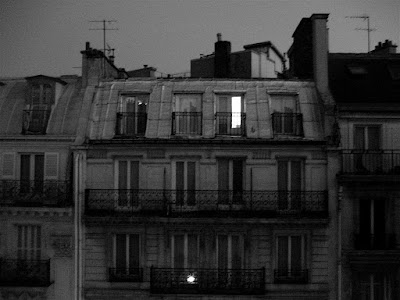 And so we come at last to the close of Larry Winchester’s sprawling masterwork. (“I finished it wishing for at least another thousand pages.” -- Harold Bloom)

(Go here to review our previous chapter. Newcomers, or old-timers who simply want to re-live the glory, may go here for the first chapter.)

Finally Dick and Daphne and Rafael walked us back, through the old streets, the old buildings leaning in toward us. The Ridpaths’ apartment was right down the street from our hotel, on Claude Bernard. Everyone kissed and hugged and shook hands goodnight, then they walked off and we went into the hotel.

Heather and I went up to the third floor in the grill-work elevator.

“They are so cool,” she said. “I wish you had friends like them back in L.A.”

We didn’t say anything specifically about Rafael. I didn’t want to torture her.

We had adjoining rooms. I kissed her good night.


I lay in bed but now I couldn’t sleep. And I didn’t mind not sleeping.

There was a wrought-iron and glass door that opened out onto a very small iron balcony overlooking the street below, the rue Broca. I went out onto the balcony, just wearing my boxer shorts, and I put my hands on the railing. I looked out at what I could see of that bunched-up, crammed-up old neighborhood, and I looked up at the sky. It was a pale bluish grey. A few tiny stars. I breathed it all in. There was a bakery on the corner and I could smell bread baking.

I had one of those moments where you become aware of your solitude in life and in the universe. Then I thought of my daughter in there sleeping in the next room. Occasionally a car drove by. Above me the sky was lightening, morning was coming on. The earth turned beneath my feet.

I heard a knocking from inside my room, and I went back in. Was Heather up too? Did she want to talk? She probably wanted to talk about Rafael.

“Be right there,” I said to the door. I hadn’t turned a light on, but I could see around the room well enough. I went to the door, opened it.

Mr. MacNamara was standing there, smoking a cigarette. To his right was Buddy Kelly, to his left was Brad. They all looked a little older, but not nineteen years older.

“Gonna invite us in?”

I stepped back, they all came in. I shook hands with them in turn, Mac, Buddy, Brad.

Brad closed the door. I went over and sat down on the bed.

There was a sort of easy chair by a small table, and Mac sat down in that. There was one other chair, but Buddy and Brad both chose to stand.

“You don’t mind if I smoke, do you?” said Mr. MacNamara, holding up his cigarette.

I started to reach for the lamp on the bed table.

“Sorry for showing up out of the blue like this, Harvey,” said Mr. MacNamara.

“Do you mind if I light a cigar?” said Brad, and he pulled a leather cigar case out of the inside pocket of his suit jacket. “I could stand by the window.”

“Oh, take a few of mine, then,” he said, and, coming over, he clicked the case open.

“Cubans,” he said. “Can’t get these back in the States. Not legally, anyways.”

There were four cigars in the case. Cohibas.

“Take three, just leave me one. I got a whole box.”

“Well, okay.” I took three from the case, and laid them on the night table.

Brad went over by the balcony.

He stood there with his hands in his pockets. Mr. MacNamara and Brad were both wearing suits, but Buddy wore a grey windbreaker and a pair of khakis, a madras shirt.

“Harvey,” said Mr. MacNamara; there was an ashtray on the little table next to his chair, he reached over, slid it closer, tapped his cigarette into it; “the reason we’re here is we have a proposition for you.”

“A proposition?” I said.

(Thank you to everyone who has read this far, and much thanks for the many kind comments and e-mails. Kindly look to the right hand side of this page to find a complete listing of links to all other chapters of Larry Winchester’s A Town Called Disdain™, soon to be a major motion picture provided the financing doesn’t fall through again.)

Hey, when's the next chapter?

"Life could be a dream, shaboom, shaboom": from some do-wop group from the 50's. Another flashback for Harvey. A great read for me. I hope you get it published.

So we're not alone in the universe, and even the wildest stories move on to another proposition.
I think young Harvey, who's not so young anymore, is about to find a whole new calling. Possibly in Larry's next work.

But French cowboys? Is that what those were? To me that seems weirder than sailors' with magic fingers and green guts.

And oh yeah: here's hoping the big prize committees pay Larry his due! There's so much here we've never known before.

I wanna go with Mac.

I want to go with Mac too!

And, yes, Kathleen, those were French cowboys. But with an English singer, no less. Somehow this song seemed appropriate...

And somewhere, in some dimension, Lefty Schiessen is still wondering what in hell happened to that baseball he hit.