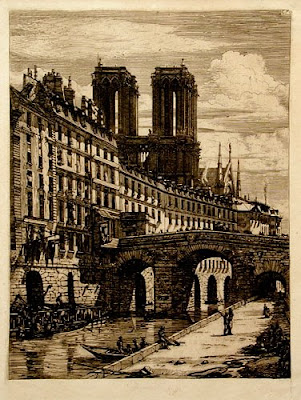 What’s better than being in a smoky jazz club in the Latin Quarter of Paris, in the company of old friends you haven’t seen in nineteen years? Nothing, that’s what...

(Go here to read our previous chapter, or here to return to the beginning of this Gold View Award©-winning epic from the 1950 Royal portable of Larry Winchester, “Perhaps the only novelist working today who can be mentioned in the same breath with giants such as Tolstoy, Dickens, Balzac, or Schnabel.” -- Harold Bloom.)

After a while Dick asked me what I knew about the old Disdain gang, and I filled him in, what I knew. Paco and Doc Goldwasser were still alive, amazingly, last I heard. But Derek, the English dude? He had OD’d on alcohol way back in the early 70s..

“Even your friend, what was his name, Skip?”

I told him no, you know how it is.

“Yes, there are those,” said Dick.

“We meet people sheerly at random,” said Dick. “Circumstances throw you together for a while. But then the circumstances change.”

I suddenly realized that he wasn’t smoking; so, yeah, things change.

“What about Hope?” I said. This was the first time that I had asked about someone.

Dick said, “Oh, Hope,” and I suddenly remembered what I had not thought of when I asked the question, namely that she was Rafael’s actual mother. And I had no idea what, if anything, Rafael knew about her. I leaned closer to Dick.

“Am I being indiscreet?” I said, low.

“Not at all,” said Dick, also speaking low. “But may I ask you another question?”

“Consider me an open book.”

“Do you still get high?”

“Darling,” said Dick, to Daphne, who was still deeply in conversation with Heather and Rafael. “Harvey and I are going to step out for some air.”

She waved at us, and went back to her conversation with the kids.

Dick and I went out, he suggested we go down to the bridge that was right down the street, and we did.

We stood in the middle of the bridge and leaned against the rail on our elbows, looking down at the river and at the cathedral of Notre Dame off there to the left, beyond another old bridge. Dick pulled a joint out of his shirt pocket, we lit it up.

We had chatted about the neighborhood ever since we left the club, nothing heavy, but now, after four or five tokes of this extremely powerful weed -- and really, would Dick have any other kind -- he said, “So, you were asking about Hope?”

I was so stoned already I said, “I was?”

“Right,” said Dick. “I suppose you didn’t hear about her?”

I was expecting him to say she had died. Overdose? Suicide? But no --

To tell the truth I wasn’t surprised.

“No,” said Dick, “not really.” He toked, held it in, then he let it out slowly, the smoke drifting off upriver. “She went insane kind of slowly and sporadically at first, and then all at once.”

“I guess it was about five years ago that she went totally cuckoo. We hadn’t heard from her for a year or so, and then one day I got a call from Big Jake. He wanted me to find her, because she had been calling him at all hours, raving, apparently, about, uh, beings. From the, uh, sky. From the heavens.”

“Maybe she wasn’t raving,” I said.

“Jake wired me some money, and I went looking for her. I found her on Mount Olympus, in Greece.”

“What was she doing on Mount Olympus?”

“Waiting for the gods to come down.”

“I called Jake. He came out to Greece. We managed to get her into a hospital in Athens. Jake stayed, I went back to Paris. After a while he he got her transferred to a sanitarium in Las Cruces, New Mexico. She’s been there ever since.”

“That’s because Jake keeps it all on the QT. But it’s a very nice place she’s in. We go to visit her there every year. Daphne and Rafael and I.”

“She seems happy enough. She’s in her own world. Spends a lot of time working in the garden.”

“Oh, yes. He’s always known she was his real mother, since he was old enough to understand, anyway. And she would come to visit us every once in a while, before she went completely wacko.”

Dick had been bogarting the joint for a while, and I took it out of his fingers.

“What did you just ask me?” said Dick.

“I was wondering about Rafael,” I said, holding in the smoke.

“Oh, right. Well, I guess he just accepts the situation. What else can you do?”

I let out the smoke.

“Good,” I said. "Nobody likes a pisser and moaner.”

“No, not unless you can be funny about it,” said Dick. “Entertaining.”

“Right,” I said, staring up along the gleaming river, past the bridge up ahead, staring at the electric-lit spires of the cathedral. “Um --”

“I just had a really disturbing flash.”

“Remember how that Frank dude said that the human race was just like this big entertainment industry for those outer space guys? Well, what if everything that happened to us back then, including the whole business with Frank, those motorcycle guys, all that shit, what if the whole thing was, was just a big movie for those outer-space people. I mean, it might not have been completely scripted, but, who knows, maybe Frank and those guys were like actors, improvving, playing off what we did, while the whole thing was being broadcast back home, like a movie, or a mini-series --”

It was me who was bogarting the joint now. Dick took the joint gently from my fingers, took a small toke, held it in, let it out.

“Here’s a thought,” he said. “What if the movie’s still going on? What if this is part of the movie?”

He waved his open hand. The bridge we stood on, the river, the church, the city, the stars, the world, and us.

We said nothing for a while, then Dick put out the roach, put it into his shirt pocket, and we headed back to the club.

(Conluded here. Kindly go to the right hand side of this page to find what might well be an up-to-date listing of links to all other possible chapters of Larry Winchester’s A Town Called Disdain™. “One of those books you want never to end, and it almost doesn’t.” -- W.H. Auden.)

I don't know if Larry's ever played a chord so resounding, heartbreaking, and yet naturally witty--as only Larry can be.

It can't really be ending, can it?
Knowing the work of Larry Winchester, there is at least a sequel.

I need to lie down after reading this episode.