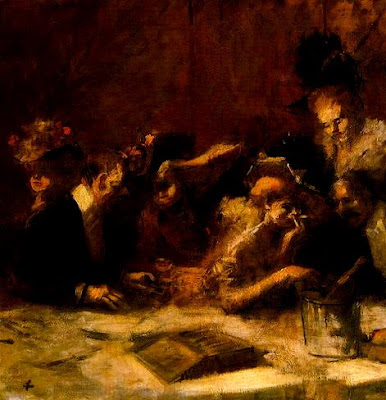 Let’s rejoin our hero Arnold Schnabel, as he enters Cape May’s historic Sid’s Tavern* with his personal lord and savior, Josh, on this momentous night in August, 1963...

*“Slake your thirst after a broiling hot day at the beach with Sid’s famous ‘Quart of Ort’ -- a 24oz frosty mug of Ortlieb’s premium pilsner -- and assuage your pangs of hunger with Sid’s equally renowned quarter-pound pretzels.” -- Walter Winchell

(Click here for the previous episode of this Gold View Award©-winning memoir, or here for the first chapter.)

The place was packed. It was Saturday night, past midnight, the height of the season.

I leaned close and put my hand near Josh’s ear.

“O ye of little faith,” said Josh. “I do have certain powers you know, Arnold.”

Facing the bar, he raised one finger and gently waved it back and forth. Two men who had been sitting near each other rose up in their seats and slid their stools away from each other, leaving a gap of about two-and-half feet near the street end of the bar.

A bartender stopped washing some glasses and came right over to us.

“How may I serve you, O Lord?” he asked, looking somewhat frightened, and shooting a nervous glance at me.

“What are you drinking, Arnold?” asked Josh.

“Well, suit yourself.” He turned to the bartender, who was still standing there, leaning forward. “Two of those famous quart mugs of yours, uh, Ortlieb’s I guess --”

“Yeah? Change your mind about a shot?”

I was trying to get the word in edgewise that I only wanted a normal-size mug of beer, but Josh turned back to the bartender.

“And just one shot please.” He turned to me again. “What’s a good whiskey, Arnold?”

“A shot of Old Forester,” said Josh to the bartender. “Better make it a double, thanks.”

The bartender hurried off down to the beer taps.

“I don’t know, buddy,” said Josh. “I know I told you not to drink too much tonight, but -- don’t you ever just feel like getting plastered sometimes?”

“Sure,” I said. To be honest I felt like getting plastered practically every day. “But, um --”

“That I would be above such urges?”

“And I’m not talking about the pain of being scourged and crucified.”

“I’m not whining, mind you,” he said. “It’s just sometimes it all gets to be a bit -- much. And that, my friend is why I’m looking forward to this.”

He smiled as the bartender laid down two enormous foaming frosty mugs of beer.

But right now a new problem presented itself. Just the sight of these two huge flagons of beer had suddenly made me realize that my bladder felt likely to burst at any moment, or at the very least to produce an embarrassing stain in my bermudas.

“What?” He pulled his great mug closer with both hands, and smiled as the bartender filled a rocks glass with about six fingers of Old Forester.

He lifted his right hand from his mug to give me his blessing.

“Take your time,” he said and he turned back to his beer and his whiskey.

I headed back towards the men's room through the crowd. “Surfin’ USA” was still on the jukebox. How odd, I thought, that there should be songs about riding a plank of wood on a wave. But why not? Certainly people never seemed to grow tired of singing about romantic love, or about the love of God. Why not the love of a sport? Why not ski ball, for instance? And why were there so few if any songs about darts, or snooker --

A man gripped my arm. It was Mr. DeVore.

“Where you been, pal? We’ve been looking for you all night?”

His wife bobbed up next to him, ducked under his arm and put her own arm around my waist.

“Arnie!” she cried. Even in this crowded and smoky place the two of them reeked of the unmistakable smell of Manhattans, Four Roses Manhattans if I had to make a guess, and quite few of them.

Suddenly two slender but strong bare arms separated the two DeVores, wrenching the couple free of me, and Miss Evans pushed herself up against my body.

“I knew you would find me,” she said.

Her smell was of Martinis, not Fleischmann’s or Banker’s Club but the good stuff, Tanqueray at least.

“At that Pete’s place you said you were going to fetch the waitress. But you disappeared. Where did you go?”

“Oh you and your vaunted insanity. And are you sane now?”

And getting less so by the second I could have added.

“You naughty man,” she said.

“Oh, very well, then. We’ll talk when you emerge. I’ve been waiting to catch you alone.”

“Who are you with? That, that Greek girl?”

“Italian, whatever. I can see you’re drawn to hotblooded Mediterranean females. But what of the austere poetic passion of the northern woman. I wonder if you’ve read Jane Eyre? Or the Nibelungenlied.”

“Where is she? Your dusky Gypsy?”

Miss Evans turned away to scan the bar in the direction from which I had come.

I pointed over her shoulder, down the bar at Josh, who was lifting his titanic frosted mug of beer to his lips with both hands; Miss Evans and both the DeVores turned to stare at him.

“Hmmm,” said Miss Evans, turning back to me, “he seems a rather louche character. You do intrigue me, Arnold.”

“I’m not keeping you," she said, although she was gripping both my arms tightly.

Without another word I pried her hands away from my arms, turned, and continued on my way to the men’s room.

By this time I had to go so badly that I decided that if there was a line I would just run madly out, duck across the street and the boardwalk, and go down among the dark pilings underneath Frank’s Playland.

(Continued here, and at this rate, well into the latter half of this century. Kindly go to the right hand side of this page to find a listing of links to other chapters of Arnold Schnabel’s Railroad Train to Heaven™. “I always take Schnabel with me to the beach.” -- Harold Bloom.)

So happy now. Laughed all through this. Thanks, Dan!

One of Arnold's best, where the sentences are ones I've always wanted to hear and/or to say.
"Go in peace," when someone needs to use the toilet is one. Best of all, since Josh says it here, for once I feel that all is right in the universe. Then, too, it brought this glorious image to mind: if Jesus drinks beer (a lot of beer it seems here) then before long He too will need to "go in peace."
Another favorite is "Oh you and your vaunted insanity." It must have been a while but certainly people have said that to me, and just as certainly--I to them.

Just another day in the life for Arnold...

"I pointed over her shoulder, down the bar at Josh, who was lifting his titanic frosted mug of beer to his lips with both hands;"

this image cracks me up, the lifting with both hands--reminds me of a background scene in an old MAD strip that would have been illustrated by Will Elder

I would love to see Elder's depiction of this scene! And it's the perfect era for him.

Now I'm just imagining Elder's take on the crowded bar, on the ferocious Miss Evans, the DeVores...how I would love to see his imagining of Arnold.

Hanging around with Arnold could drive anyone to drink, Jen.