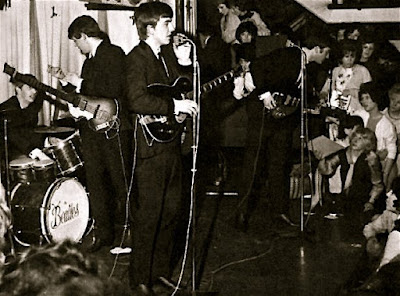 Welcome back to Sid’s Tavern (“A refreshingly cool and dark oasis right across the street from the sun-blasted purgatory of the beach.” -- J.J. Hunsecker), in the quaint seaside resort of Cape May, New Jersey, where our memoirist Arnold Schnabel stands awkwardly at the bar between the stools occupied by his friend “Josh” and the implacable authoress Gertrude Evans, on this long Saturday night in August of 1963...

(Scroll down a post or click here to see our previous episode; go here to see the first chapter of of this Gold View Award©-winning memoir.)

Miss Evans said nothing but stared intently into my eyes.

I looked away. Some rock and roll song with no words had been playing, and now there was one of those pauses that happens in the universe of a bar, when one song goes off the jukebox but another one hasn’t come on yet, and all you hear is people shouting and laughing into the void.

I had already forgotten what it was she was talking about, and what she now proceeded to say did nothing to enlighten me, because just as she began to speak -- leaning slightly toward me, but speaking not in the somewhat high and trilling tones she had been using but in a low and more serious-sounding voice -- unfortunately, or maybe fortunately, all I could hear was this new song that had come on the jukebox, Lesley Gore singing about how it was some other girl named Judy’s turn to cry. I could see Miss Evans’s lips moving, and I heard some sort of vocal noise coming out from between them, but I hadn’t the faintest notion what she was saying. I suppose I could have leaned forward, or asked her to speak up, or both, but instead I just nodded my head in time to the music.

Finally the song faded away. My head was still nodding I think.

“This is why I like you, Arnold. You’re very astute.”

“Pardon me?” said Josh. I’m pretty sure he hadn’t been paying attention either.

I was thinking that I could make it through this as long as songs kept coming on the jukebox. Another one about a guy with two faces came on, and I lifted my great mug to take another drink of beer when someone clapped me on the back, causing me almost to chip a tooth on the glass.

It was DeVore, and with him of course was his wife. He held a partially consumed manhattan in one hand, she held both a manhattan and a martini.

“I thought you were gonna come join us at our table,” he said.

DeVore thrust his free hand past me toward Josh.

Josh rose from his seat again and shook DeVore’s hand.

“Pleased to meet you, Josh. And this is my little lady --”

He said her name I think, but don’t ask me what it was. It sounded like Radish, but that couldn’t be it.

Mrs. DeVore made some chirping noises, and I noticed Miss Evans lowering her eyebrows at her. She spoke, and now I could hear her clearly over the music.

“Listen, we’ll be over in a little while.”

“Why not come over now?” said Mr. DeVore.

“Arnold and Joshua and I are having a private conversation.”

“What are you talking about, Arnold?” asked DeVore.

He had me stumped.

“Look, we ordered you a martini, Gertrude,” said Mrs. DeVore. She raised up the pristine martini. “Very dry, just the way you wanted it.”

“Oh. Thanks.” Miss Evans polished off the martini she was already holding, put it down, then took the fresh one off of Mrs. DeVore. “We’ll be along in a minute.”

“In a minute,” said Miss Evans brightly, but firmly.

“Oh, please don’t start blubbering, Gladys. It’s silly cows like you who give our gender a bad name.”

This didn’t help. Mrs. DeVore began to emit a sound like a police car siren drawing closer and closer.

Josh, who had halfway re-seated himself, now got up again with his beer mug.

“Where are you going, Josh?” said Miss Evans, putting a hand on his arm.

“Oh, I will,” he said. He pulled his arm free, tapped me on the shoulder.

“Come on, Arnold, help me choose some tunes.”

“Oh, I really don’t know much about music,” I said.

Now he grabbed my arm, firmly, and pulled.

“Sure,” said Josh, and he pulled me along and down through the throng to the other end of the bar where the jukebox was.

When we got there he said, “Don’t look back.”

He reached into his pocket, pulled out a handful of dimes, and began dropping them into the slot.

“Punch some songs in, Arnold.”

“What do you want to hear?”

“It doesn’t matter. Anything.”

“Arnold,” he said, dropping in his dimes from his seemingly inexhaustible supply, “I’ve spent forty days and forty nights in the desert, surviving off the flesh of insects. As you well know I was brutally scourged, and then nailed to a cross. I spent three days in a tomb.”

I saw a Kingston Trio song, “Tom Dooley”, so I punched in the numbers and letters for that one.

“I’ve been through battles, Arnold. I’ve stood toe to toe with Beelzebub himself on a crag in the Atlas Mountains, fencing with thunderbolts. For thirty-six hours we dueled in a blinding tempest.”

“I didn’t win exactly but I fought him to a draw. Play another song.”

I saw a Lesley Gore, so I played that one.

“I don’t scare easily,” said Josh. “But that woman scares the hell out of me. How do you deal with her?”

“Why didn’t you run away just now?”

“To be honest I was planning to do that after I finished my beer.”

“And leave me alone with her?”

“She’ll only follow us if we leave together,” I said. “And so will the DeVores.”

“The Beatles? Never heard of them.”

“Trust me, they’re going to be huge.”

I punched in the song.

(Continued here, and indefinitely if not infinitely. Please refer to the right hand column of this page to find a listing of links to all other extant episodes of Arnold Schnabel’s Railroad Train to Heaven™, as serialized on the Chock Full O’Nuts Dramatic Showcase Hour, hosted by Oscar Levant, on the DuMont Television Network.)

I dig the soundtrack.

I think I got stuck talking to the DeVores in a bar last night.

That Radish/Gladys thing won't leave me alone: fitting, I guess, since she's Mrs. DeVore.
Love to think that Josh hasn't a clue about Gertrude or Gladys/Babish but is prescient about the music-scape (if that's a word.)

All cylinders firing, Dan.
I love the JJ Hunsecker quote too. You must have had to dig in the archives for that one.

I tell ya... the DeVores need to go visit Clarissa...

I wonder if Jesus is capable of puking.

Dear Reader, well, after two triple bourbons, and now that he's on his second quart of beer, we'll just have to see...