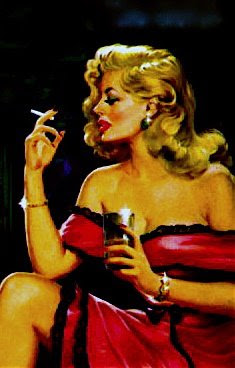 In our previous episode of this Gold View Award©-winning masterpiece our memoirist Arnold Schnabel introduced the hot-blooded novelist Gertrude Evans to his friend “Josh” at Sid’s Tavern (“Right across from the beach and within staggering distance of your hotel”), in the quaint port of Cape May NJ on this strange hot night in August, 1963...

He had drunk half of his triple whiskey in one go. I hoped he could handle it.

The bartender appeared with Josh’s fresh quart of beer.

He placed his cigarette in an ashtray, then lifted his half-drunk quart mug to his mouth, and, leaning progressively backward, drank its contents in four continuous gulps.

Then he leaned forward, smiling, and handed it to the bartender.

Josh wiped his mouth with the back of his hand.

“What, if anything, is it that you do for a living?”

He picked up his cigarette, and tapped its ash into the tray.

“Now I am intrigued,” said Miss Evans. “And where if I may be so bold as to ask do you get the shiny shekels to pay for your drinks and your cigarettes?”

Josh seemed to consider the question for a moment. Or maybe he really couldn’t handle his booze and he was just being slow on the uptake.

“I suppose you could say I get my shiny shekels from my father.”

“Oh, yes.” He drew his fresh quart mug closer. “That guy has all the shiny shekels in the world.”

“And are you your father’s son and heir?” asked Miss Evans.

“Oh really.” said Miss Evans. “Now I am very much intrigued. So tell me, Joshua, what do you do with yourself all day since you don’t have a job.”

Josh drew on his cigarette before answering.

“You watch and listen.”

Josh lifted his mug, one hand on its handle, his other hand cradling its bottom.

“But you don’t do anything,” said Miss Evans.

“Watching and listening is what I do, Gertrude.”

He took a small drink, nodded approvingly, as if to say the first quart is always good, but the second one is even better.

I don’t know about those two, but I felt that this conversation was very likely and very soon about to drive me to the point of climbing up a wall, or, more probably, to throwing down my own quart-size mug and running screaming out of there.

I decided to finish my beer as quickly as possible, make my excuses, and take my leave, come hell or high water (and the way this night was going I wasn’t about to discount the possibility of either).

Miss Evans had been regarding Josh from under her lowered dark eyelashes. She picked up her martini and took another drink.

“How did you know who I was, Joshua?” she asked. “Have you read my books?”

“I am more and more impressed. Not too many men read my books.”

“I read everything,” said Josh.

Finally Josh’s face seemed to betray boredom, as if he had suddenly realized just then that not only was this as good as this conversation was going to get, but that from here on out it was only going to get worse, and very probably much worse.

“Which of my books is your favorite?” Miss Evans asked him.

And it occurred to me right then that as boring as all this was at least I had been excluded so far from active participation. So I had that to be thankful for.

“My favorite of your books,” Josh said, after seeming to ponder the question a moment. “Well, I guess I like the most recent one best --”

So much for me being thankfully excluded.

“And how far along are you?” she asked.

“I’m happy you’re reading it at all. As I say, usually men don't appreciate my work. And do you know why? Do you, Arnold? Yes, I can see by your expression you do know. Don’t you?”

I took a deep drink of beer before answering.

(Continued here, and until Josh only knows when. Kindly go to the right hand column of this site to find a listing of links to all other published chapters of Arnold Schnabel’s Railroad Train to Heaven™. “Schnabel makes Proust seem terse.” -- Harold Bloom.)

If there's a more revealing character trait than the tendency to call Josh "Joshua" and Steve "Stephen," I don't know of it.
Dear Lord, beware of women who embellish your name.

Jesus lacking patience? Wow... I only wonder how he'd fare with the DeVores.

I suppose Josh's father's house has many rooms, too. Wonder if they'll end up back at that place.

"Dear Lord, beware of women who embellish your name."

I know, and she calls him Joshua about ten seconds after saying, "I'll call you Josh".

Typical of the bar-fly type at your local watering hole - specially in the wee small hours when all the respectable folk have gone home...

Dianne, you've reminded me of this lovely song.

Thank you for the song, Dan. It was lovely. I do love Sinatra.