“A Town Called Disdain”, Episode 130: late night drinks at Jake’s, or, Daphne runs the voodoo down 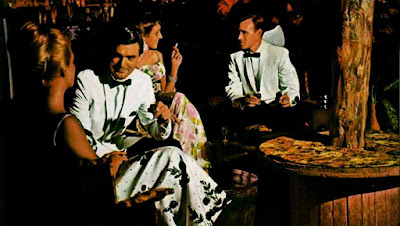 Our heroes, and our anti-heroes, those who have survived, have finally made it back to the Johnstone ranch, very late on this September night in 1969, just a short ride by Cadillac car from a town called Disdain...

(Go here to read our previous chapter, or here for the very first chapter of this Gold View Award©-winning epic from Larry Winchester, the man Harold Bloom has called “perhaps the only American writer of his generation who could give Arnold Schnabel a run for his money”.)

Jake insisted that everyone stay over, even Paco, but before they turned in he wanted to give them all a nice big Western-style breakfast. So, after telephoning Mr. Parsons and making sure it was okay for Cleb and Attie to stay, he woke up Chang and Esmeralda and put them to work while everybody sat in the parlor and had some liquid refreshment.

No one had yet spoken of the amazing things that had happened that night. Finally, though, after Enid had finished her first Manhattan and while Jake was mixing a new shakerful, she couldn’t take it any more.

“All right,” she said, “I give up. I’ll come out and say it since no one else seems to want to. What the hell happened tonight?”

“Now, Miz Enid, I don’t know as we have to talk about all that. Ain’t that right, Major?”

“Used to be,” said Mac, sitting in his blood-stained suit in a comfortable stuffed leather chair. “Jake and I knew each other back in the war.”

“What --” Enid didn’t quite know what she wanted to ask next. She turned to Daphne, who was sitting next to her on the sofa. “Daphne, speak to me. What happened with that little sailor guy?”

Sailor, thought Jake. So the navy was involved too.

“Well, by that German person who was staying here, him and his trollop girlfriend or wife or whore. You remember, from the barbecue? Mein Herr and Frau Von Hideous?”

Hmmm, thought Jake. He hadn’t trusted them Germans one bit, no sir, even if they were nice and polite. Not one bit.

Again Enid didn’t know quite what she wanted to ask. Had it all been a peyote dream? But no, it wasn’t a dream that these people were splattered with blood, and that this Major and this Buddy person seemed to have bullet holes in their clothing.

“You see,” said Daphne, “they were in the spaceship.”

“How did the Germans get in the spaceship?”

“The Sailor left the ramp down. He shouldn’t have done that.”

Leave it to the navy to fuck things up, thought Jake.

“Okay,” said Enid; “and what happened to the German people?”

Mac shrugged, and lit a cigarette. He looked as if he were quite enjoying Daphne’s summation of the evening’s events.

“Well,” she went on, after taking a sip of her Manhattan, “we went into the spaceship, Dick and the Sailor and I, and the Sailor closed the doors behind us by pressing some buttons on a panel on the wall, but then we found the Sailor’s friends shot by Adolph and Eva, and the Sailor went ape so they shot him, and Harvey I think shot the trollop, and they both shot Dick and Harvey, and the guy was going to shoot Dick again, and so I shot the guy. I don’t regret it either. Right through the head.”

“Yes. But the Sailor managed to heal them with this mystical life force thing with his fingers, before he died.”

“No, I’m quite serious, Enid. Then, while Dick and Harvey were recovering, I went to look for a ladies’ room and I found this sort of control room with a lot of TV screens in it, and one of them had a spaceman on it, and I told him what had happened and he said, okay, well, press such and such buttons and this will open the doors to the spaceship so we can leave, but I pressed the wrong buttons because I had to pee so badly and I couldn’t concentrate and I accidentally made the thing take off into outer space, and then into quite another dimension in fact.”

“Well, Enid, you asked, and that’s exactly what happened. And then, well, I really did have to pee and I never did find the ladies’ room, so I went in this grate and all sorts of smoke came out and I was absolutely terrified that we would all suffocate, but then we landed in this sort of casino in outer space.”

Big Jake realized she was fooling now. She obviously couldn’t give away all the top secret info about what really went on in that flying saucer, so she was just having fun, God bless her.

He gave the Manhattans another stir.

“And that’s where we met the whole Rat Pack,” said Daphne, “including Brad over there.”

“Hey, look,” said Brad, “I am only a hired hand.” Brad was standing with his drink. He was one of those guys who preferred to do his drinking standing up. “In fact,” he said, “come to think of it, I guess I’m not even a hired hand now. I seem to be out of a job.”

“Not necessarily,” said Mac. “I can always use a good man.”

“Hoo boy,” said Brad. “Somethin’ tells me I might be goin’ from the frying pan into the fire, but what the hell, I doubt they’ll take me back at the casino after all the shit that went down tonight, and since I ain’t eligible for unemployment comp, what the hell, you’re on, Major.”

Jake figured “the casino” must be code for the air force base they flew out of, maybe the local one, maybe not, maybe it was that Area 51 place he’d heard about. Anyways, he figured that Brad had probably been at least partially responsible for the saucer’s crash landing, maybe he was the pilot, and his ass was in a sling by consequence; but the Major was telling him don’t worry about it, Brad had a job with him if he wanted it. There were probably all sorts of different government and military factions involved, everybody trying to cover their own ass just like everywhere else.

Then Esmeralda came in and said breakfast was ready.

(Continued here. Kindly go to the right hand side of this page for what might possibly be an up-to-date listing of all other available chapters of Larry Winchester’s A Town Called Disdain™, absolutely free, gratis, and for nothing, for a limited time only.)

It almost makes sense the way Daphne explains it. Almost.

Finally, a big family that gets along. Is it because all the bad guys have died?
No doubt we haven't met the baddest yet. Unless Mac's suavity allows him to be the baddest ever.

It's the family that slays together.