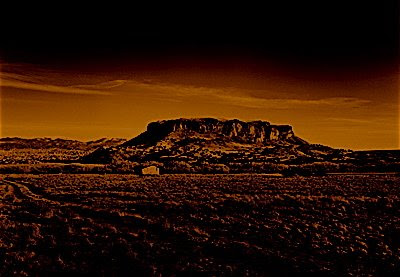 Let us return now to a certain momentous night in September of 1969, and to the desert beyond the darkness at the edge of a town called Disdain...

(Go here to review our previous chapter, or here for the first chapter of this Gold View Award©-winning chef d’ouevre from the battered Royal portable of Larry Winchester, the man Harold Bloom has called “the unholy love child of James Joyce and Jackie Collins”.)

Derek had gotten pretty banged up and cut up but the principal source of all his yelling was a dislocated knee. The Doc gave him some tincture of opium, and then Enid and Hope held Derek down while the Doc popped the knee back into place.

Paco hadn’t broken anything but he was pretty banged up too, so the Doc gave him some opium as well.

They were all hunkered down smoking cigarettes by the wrecked station wagon lying on its side when Jake’s Cadillac drove up.

Some moments are too weird for words. When very strange things happen it’s hard enough just realizing what’s happening; it’s even harder to say something about it.

And so Enid and Hope and the Doc and Paco and even Derek didn’t say very much at all when Jake pulled up with Dick and Daphne and Harvey and Cleb and Attie as well as these three other strange men, all of them except Jake and Cleb and Attie more or less splattered with gore.

Everyone piled out of the Cadillac, and Dick made the introductions. Everyone who didn’t already have a cigarette or a cigar going lit one up.

The Doc and Mr. MacNamara actually recognized each other from the OSS officers’ club in Paris and the night in 1944 when Mac had gotten the Doc laid by a Sorbonne student, but neither the Doc nor Mac made a big deal out of this reunion, and everyone else seemed to accept it as par for the course.

No one asked the obvious questions. The general feeling seemed to be, “All in good time. First let’s get out of this fucking desert.”

The immediate problem was transportation, so all the men except Paco and Derek pitched in and managed to turn Paco’s station wagon off its side and right side up again. The engine was shot to hell but the tires were still good, so they rigged the front of the station wagon to the back of Jake’s Cadillac with some rope Jake had in his trunk.

Everybody piled into both cars, and Jake started towing the station wagon to his ranch.

Harvey wound up in the far left back seat of the Cadillac with Attie on his lap. Mrs. Ridpath sat next to Harvey with Cleb on her lap. Cleb fell asleep with his head on Harvey’s right shoulder. Harvey could smell Attie’s hair in his face and she felt warm and not very heavy. Funny thing, up close like this in the starlight her skin didn’t look green at all. He started to get an erection, so he lifted one thigh up a bit to try to disguise it.

“Am I too heavy, Harvey?” asked Attie.

She shifted a bit herself.

He was hard as a rock now and still trying to hold his one thigh higher to hide it when Attie shifted again so that her back was right against his stomach and she scrunched his leg down so that his hard-on went in between her buttocks.

He’d tried to be a gentleman and there wasn’t much more you could do beyond that.

Well, it was only natural.

God only knew how much time Attie had on the Earth, or him either for that matter.

Who could begrudge them?

(Continued here. Please consult the right hand side of this page for what could very well be a complete listing of all other published chapters of Larry Winchester’s A Town Called Disdain™. Be sure to visit your local Woolworth’s to complete your collection of A Town Called Disdain Action Figures, this week only marked down 75%.)

Hey, I thought this was a PG-rated blog!

Sorry, Samson -- I think I was drunk when I was editing Larry's last post. I'll make sure the old boy keeps it clean in the future!

Some moments are too weird for words. When very strange things happen it’s hard enough just realizing what’s happening; it’s even harder to say something about it.Larry's poetry rises when it's least expected. No doubt it's always there, but I recognize it (as opposed to only feeling it) when the plot slows so we can catch out breath.
PS This is Kathleen not Manny--turns out he brought his laptap along.

Ah, yes, Kathleen, Larry has his occasional poetic moments (although he hates to admit it), maybe especially in these chapters when for a change not a whole lot is going on...