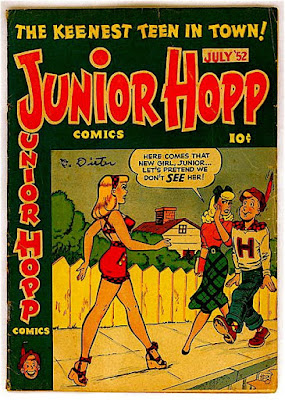 It was neither the best of times nor the worst of times. It was, however, the time of Arnold Schnabel...

Previously in this Gold View Award-winning masterpiece of autobiography our hero Arnold (carrying the alarmingly animated doll Clarissa) finally rejoined his friends in a booth in the Ugly Mug, that “fun stop for fun people” in the quaint fishing village and resort of Cape May, NJ, on a strange night in August of 1963:

Thank God (or, more likely, thank his opposite number, Jack Scratch’s employer), she behaved. For the time being.

“What the hell is that?” said Steve, leaning forward over the table. ”Barbie’s evil twin? Put her on the table.”

I took her out of the box, and, adjusting her legs, sat her, (comfortably I hoped) on the table, facing inward.

“Because that’s the creepiest looking doll I’ve ever seen,” she said.

I was holding Clarissa by both her arms, and I could feel her little muscles twitch, as if she were about to start swinging at Elektra.

I could still feel Clarissa’s arm muscles pulsing, but I held her down, and at least she was keeping to her word about remaining silent.

“Where did you ever get her?” asked Steve.

“So what are you doing with her?”

I knew I needed to give an edited version.

“Well, Dick and I ran into each other, and we were on our way back here when we saw Miss Evans and the DeVores come out --”

“We told them we hadn’t seen you, Arnold,” said Steve.

“So, did they waylay you?” asked Miss Rathbone, pronouncing each syllable very distinctly.

“Well, before they could, Dick asked the proprietor of the Whatnot Shoppe if we could hide in his store for a while --”

“You lead a very interesting life, Arnold,” said Steve. Both he and Miss Rathbone were still drinking Manhattans, although Larry and Elektra were drinking draft beer.

“Do go on, Arnold,” said Miss Rathbone. She was smoking one of her pink Vanity Fair cigarettes.

“Well -- the proprietor, Mr. Arbuthnot, gave Dick the doll. To give to Daphne.”

“Why did he give Dick the doll?” asked Steve.

I couldn’t tell Steve it was because we had saved the universe. So I told a white lie.

“I guess because he likes Dick,” I said.

“But you still haven’t explained why you have the doll.”

“Oh, Dick asked me to hold her while he lit a cigarette, and then he walked away, to find Daphne, and he accidentally left her with me.”

“I wonder if she has a name?” asked Miss Rathbone.

Was it my imagination or was Clarissa staring coldly with her dark eyes at Elektra?

The “Blame It On The Bossa Nova” song had gone off by now, and another girl was singing a song about the end of the world.

“Can’t you put it back into the box?” said Elektra.

Again I felt a twitching of those small but puissant muscles and tendons.

Fortunately, Steve came to the rescue.

“Don’t you dare put her back in her box,” said Steve. “I think she’s absolutely darling.”

Clarissa turned her gaze indulgently on Steve, and I tried to make it look as if it was I who was turning her.

Fortunately our waitress appeared just then, loaded down with plates of hamburgers and baskets of French fries.

“Okay, eat, Arnold,” said Elektra, “we were optimistic about your return and we ordered for you.”

I put the box on the floor beneath the table and Clarissa on my lap, and I set to work on the food.

I hadn’t realized it before but I was ravenously hungry, and why not? It had been a busy and taxing evening. I had been chased by a madwoman (and that last epithet, coming from me, is saying something), I had been hunted also by two raging idiots who eventually teamed up with the madwoman on a seeming mission to destroy what little sanity I still might possess, I had witnessed Father Reilly’s dark night of the soul and in retrospect had been not only embarrassed by it but bored, in the course of which I had been visited yet again by him who was my own personal lord and savior or so it would seem, I had experienced an ecstasy with Elektra which if it was a sin then it was a sin I profoundly hoped to commit again as soon as was feasible, I had traveled to a floating casino in outer space and there resisted the blandishments of Frank and the Rat Pack, I had met Jesus again (for the sixth or seventh time that day) as well as St. Thomas Becket and Jack Scratch, as well as Mr. Arbuthnot in his shop of frightening wonders, I had traveled with Dick and Mr. Arbuthnot through a magic globe which granted us invisibility and inaudibility, we had dived also through a page of the Book of Time into a frozen world which Dick and I had only barely prevented Mr. Arbuthnot’s cat Shnooby from destroying, I had found myself possessed of this capricious doll, I had met Mr. Jones and Mrs. Davenport, and so on, and the evening was not yet over.

Also I had partaken of those mushrooms of Larry’s.

Anyway, I was very hungry.

Just when I was ready for it a pitcher of beer appeared on the table, and an empty mug for me, which I assented to allow the waitress to fill, and which I emptied two-thirds of in three long gulps.

I felt Clarissa pinch my thigh, and I realized I was comporting myself piggishly. I deliberately laid the last quarter of my burger on my plate instead of devouring it as quickly as I had each of its other three quarters. Then I forced myself to pick up merely one French fry and to eat only the first half-inch of it rather than all of it at once along with four or five of its fellows in a mouthful, which I had just done two or three times in less than a minute.

“We have more good news, Arnold,” said Larry, who had that admirable ability to eat and drink heartily and to talk all at the same time without seeming abominable. “Elektra’s joining us on the show.”

“Do you mind, Arnold?” said Elektra. She had a fleck of ketchup on her upper lip.

She squeezed my thigh.

Clarissa pinched my other thigh.

What could I do? I picked up that ragged last quadrant of my burger and devoured it, then washed it down with beer. Then, not standing on ceremony, I filled my mug again from the pitcher.

(Continued here. Feel free to go to the right hand side of this page to find what purports to be an up-to-date listing of links to all other possible episodes of Arnold Schnabel’s Railroad Train to Heaven™, fully vetted and approved by the Commissariat of Inspirational Literature.)

“Where did you ever get her?” asked Steve.

From the bowels of hell...

Bravo, Arnold! Here's hoping your autobiography continues at least until the end of the world.
Can't wait until Elektra's acting in Arnold and Larry's movie.

One more thing: in the episode where Clarissa first spoke, it occurred to me that she and Steve would be perfect together. The truth.

The above is from Kathleen, not Manny.

Obviously, I didn't expect my picture to show up. Why I'm not looking like Manny here is a mystery.

Arnold is just an ordinary bloke isn't he - give him a plate of chips, a beer and his girl and he's happy as a pig in muck - in fact Clarissa thinks he is a pig in muck.

Pity he has to choose between Clarissa and Electra. They are both good for him in their different ways.

Thanks for the very good comment, Dianne. Now let's see if Arnold does make a choice...

"Clarissa turned her gaze indulgently on Steve, and I tried to make it look as it was I who was turning her."

speaking of dolls, skeeter's hairdo reminds me of one of those old dolls where the hair could creepily be tugged out to be made longer through little holes in the plastic skull

I remember those dolls!

But why do I remember them?

Oh, by the way, Anon, I'm doubly glad you mentioned that line, because I noticed a typo! Shoulda been an "if" between the "as" and the "it". (I fixed it.)

I thought it was just fresh phrasing!

More likely the result of a fresh late-night bottle of beer, Anon!