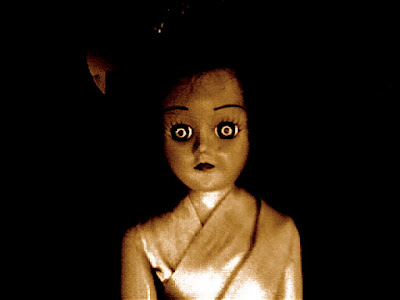 Let us rejoin Arnold Schnabel* and his friends (including that impish doll Clarissa) in the Ugly Mug, that cynosure of nightlife in the quaint old seaport of Cape May, NJ, on this strange warm night in August of 1963…

(Go here for our previous chapter or here for the beginning of this Gold View Award-winning memoir.)

*”Poet? Madman? Saint? All of the above?” -- Harold Bloom, on Late Night With Jimmy Fallon.

I kept my left hand on Clarissa, to hold her up, but also, and primarily, to attempt to reassure her. Even I could tell that things weren’t going well between her and Elektra. I had never before been caught like this in the middle of the field of battle between two warring women, but I had read about such situations many times in my trashy paperbacks, and seen as such dramatized often on television programs such as Johnny Staccato, M Squad, and The Kraft Cheese Dramatic Showcase.

I tried to remember what courses of action or inaction the male protagonists took in these fictional contests, and I realized that no matter what the man did it seemed that someone nearly always wound up dead, sometimes more than one person, and quite often the man.

“We have some more good news for you, Arnold,” said Steve.

I waited for him to tell me.

“Well don’t you want to know what it is?” he asked.

“Charlotte and I are coming with you guys to France!”

My first thought was that Larry had now joined the legions of the insane and had just hired Steve and Miss Rathbone for his movie.

But then I thought, well, maybe Steve could design costumes, Miss Rathbone could paint scenery, who knows.

I suppose I just stared blankly. I felt Clarissa pinch my thigh again.

“Oh!” said Steve. “I get it! Ha! You were joking! As if -- ha! Well, yes, Arnold, Charlotte and I do intend to be married in Paris, and no, you naughty man, I am not going to be on her payroll. Not much anyway!”

“And guess what else, my best man?” said Steve.

This time I picked up the ball.

“Elektra’s going to be our maid of honor!”

“And Larry here has agreed to give away the bride, because poor Charlotte’s father is no longer with us, God rest his soul in Heaven.”

“What the hell,” said Larry.

“My father is in Hell,” said Miss Rathbone.

Miss Rathbone’s eyes and mine met at this moment, and through her drunkenness I seemed to feel all the thwarted longing of her life, but also a wild determination, and I wondered if she was challenging me to say what of course I thought, to wit, that it was insane for her and Steve to get married, in Paris or anywhere else.

“I wonder if we can get married at that big old cathedral?” Steve asked, of no one in particular. “You know, the one with hunchback?”

The end of the world song had faded away some little time ago and been replaced by a loud instrumental rock and roll song, and now -- seeming to roll up out of the crowd on a drum solo -- Jesus appeared by our table, smiling, and casually holding one of his ever-present Pall Malls.

He was still in his raffish seashore attire, this un-ironed and faded pinstriped Oxford shirt, rolled up at the sleeves, and his wrinkled khakis.

He gave me a tap on the shoulder.

“Um, fine, thanks,” I said, and immediately I wondered if he was really there, and if my companions weren’t watching me speak to the thin (well, smoky) air. But a quick glance told me that they as well were all looking and indeed smiling at this scruffy but handsome fellow.

“Aren’t you going to introduce me to your friends?” he asked. “This must be the famous Elektra! How are you, babe? Arnold has told me all about you?”

She nudged me with her elbow.

“Nothing bad, believe me,” said Jesus.

I knew this was the place where I was supposed to make the introductions, but I just couldn’t bring myself to do it. Even my madness has its bounds.

Fortunately, he took over.

Okay. Josh. That made it easier, certainly easier than Jesus, the Son of God. My politeness forced me to continue the farce.

“Josh,” I said, I think with a certain emphasis, to Jesus, “this is Miss Rathbone.”

She offered her hand and Jesus took it and brushed her knuckles with his lips.

“How are ya, Steve,” said Jesus, giving Steve’s pale hand a manly shake with his own tanned and strong carpenter’s hand.

“Oh you,” said Steve, withdrawing his hand and waving it at Jesus.

“Larry Winchester, Josh,” said Larry, rising up slightly and reaching out his hand.

“I think it be no other than e’en so,” said Larry.

“Two For Tortuga? Ask Not The Hangman? White Slave Ship? Assignment in Bangalore? The Mystery of Old York Road?”

“Call me Larry and sit your ass down, friend, you’re drinking on me tonight.”

“I said sit the hell down.”

Charlotte moved in closer to Steve, and Jesus sat down across from me. He looked at Clarissa, whose nose was just above the level of the table. I could see she was staring right at him.

“And who’s your little friend there, Arnold?” asked Jesus.

Once again I felt her pinch my thigh, but much harder now. It would definitely leave a mark.

She continued to pinch my thigh.

Gritting my teeth in pain, I said, “She’s very pleased to meet you -- Josh.”

Everyone at the table laughed, and Clarissa finally stopped pinching my thigh.

(Continued here and for approximately 5,978 further installments. Please look to the right hand column of this page to find an up-to-date listing of links to all other published chapters of Arnold Schnabel’s Railroad Train to Heaven™, absolutely free of charge, although donations will be accepted in aid of the Arnold Schnabel Society of Philadelphia. Please make checks out to “cash”.)

For how long can Clarissa keep silent? I sense she is on the verge of opening her mouth...

I nearly had to leave without reading after seeing that photo.

For a second I got excited about all the Joshes I know. But then I remembered, Arnold's a saint.

Dianne, I suspect that our little Clarissa is bursting at her hand-sewn seams.

Jen, try keeping a night-light on. And try to think peaceful thoughts...

Kathleen, next time you meet one of your Joshes, look for that certain faint glow around his head. (If he smokes Pall Malls, well, that's a dead giveaway.)

Great installment--Steve cracks me up.

This Jesus could make me rejoin the church. Is he recruiting?

Dean: Steve cracks me up, too.

And, Manny, somehow I think that "Josh" here is far too laid back to bother actually recruiting. But if you happen to be sitting getting quietly stewed one night at the Ugly Mug, who knows who might take that adjacent empty barstool?

I am very curious how Arnold will cope with Clarissa when he needs the toilet.

So am I, Dianne, now that you mention it.